East meets West on a Princess Cruise in Japan 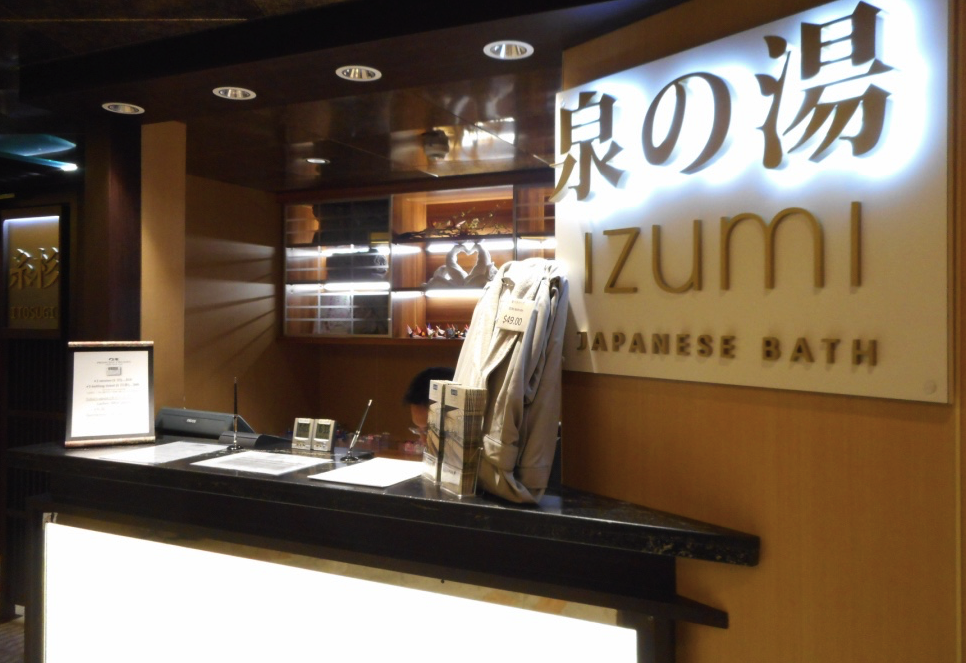 AT SEA ON THE DIAMOND PRINCESS OFF THE COAST OF JAPAN — If you thought cruises were just about fun and games, ask 13 year-old Josh Berkowitz.

“They’re very educational,” said the suburban Philadelphia teen. “You meet kids from all over the world.”

Here on the Diamond Princess cruising off Japan, in fact, there are people on board from 34 countries, from the United States and Canada (just under 600 of the 2771 passengers) to Japan (1034 passengers) to Australia and Britain, China and Hong Kong, Russia and Thailand. There are multigenerational Japanese families, mothers and daughters cruising together from Russia and parents with preschoolers.

Josh is cruising with his grandmother Myrna Dukart, 72, and also from suburban Philadelphia. It is his Bar Mitzvah present, she explained, adding that her husband is in a nursing home. “You shouldn’t put off things you want to do,” she said. “You don’t know what life will hand you.”

Unlike some cruises that might have over 1000 kids on board, this one has just 134, including 34 teens, and that suits Josh Berkowitz just fine. “When there aren’t as many kids, you get to know each other better,” he explained.

Of course the ports of a foreign cruise like this one are educational. Until I came aboard in Yokohama, I hadn’t thought much about the cruise experience being educational but here, with more than 1000 Japanese passengers, we westerners are getting a lesson in Japanese culture and food. There’s a Japanese bath on board—Izumi Japanese Bath–a ramen noodle bar at the buffet, miso soup and grilled fish served at breakfast and activities that include a traditional Bon Odori Japanese Dance class, one entitled “Let’s Wear Yukata” as well as the more traditional cruise ship activities as Trivia, Poolside games, a tap dance class Bingo and plenty of organized activities for the kids on board. Shore excursions include a visit to a Sumo wrestling museum as well as a traditional Onsen, a Japanese hot springs bath.

“The teens tend to get together in the evening,” Josh Berkowitz said, adding that the staff is “really nice.” He said that he has kept in touch with friends from around the world he’d met on previous Princess cruises. The 1050 crew are an international bunch too, some of whom speak Japanese as everything is announced in both languages. Menus feature eastern as well as western dishes. Last night, for example, you could have started with cream of mushroom or miso soup, roast beef or grilled salmon in miso sauce. How about marinated octopus? Breakfast was also a mix of east and west—soybean soup as well as oatmeal and cold cereals, pickled vegetables and sour plum as well as grapefruit, grilled mackerel plus pancakes and omelets. The menus are printed in Japanese as well as English.

And because Princess has assigned tables at dinner and fills tables at breakfast and lunch, that encourages guests from around the world to meet. We shared breakfast with twin sisters from England and lunch with a woman from Australia as well as Josh and his grandmother. That’s certainly educational for everyone too.

There is also Kai Sushi Bar restaurant on board–Josh Berkowitz said “sushi is different here than at home”–as well as specialty steak and Italian restaurants, Sundaes ice cream bar and Prego Pizzeria as well as Trident Grill for burgers and hot dogs. Passengers are assigned a specific seating at one of five main dining rooms and make reservations for the specialty restaurants. This being a traditional cruise ship, there are five bars and show rooms with all varieties of entertainment—50s and 60s music, 70s Disco, Hawaiian Melodies, Steel Guitar.

“You learn more being in a country for a week than in school for half a year,” offers Josh Berkowitz, adding that while he is sticking to familiar fare, he’s glad for the opportunity to try new foods. “And if I don’t like something, I can order something else,” he said.

He’s also the fan of the entertainment—especially the comedians and magicians. In fact, the magicians had a huge crowd in the atrium giving a preview of their show.

I just wish Princess and other cruise lines would offer more all-inclusive experiences. It seems every ten minutes someone is offering something that costs more—a lemonade at lunch; a cappuccino, wine tasting or of course the specialty restaurants.

Still, there are many passengers on board who have cruised Princess many times, including on this ship which underwent a $30 million renovation last year. “I like the atmosphere,” said Diane Bratt, who is from near Oxford, England. “You can depend on the product.”

The best part, everyone agrees: Not having to pack or unpack.