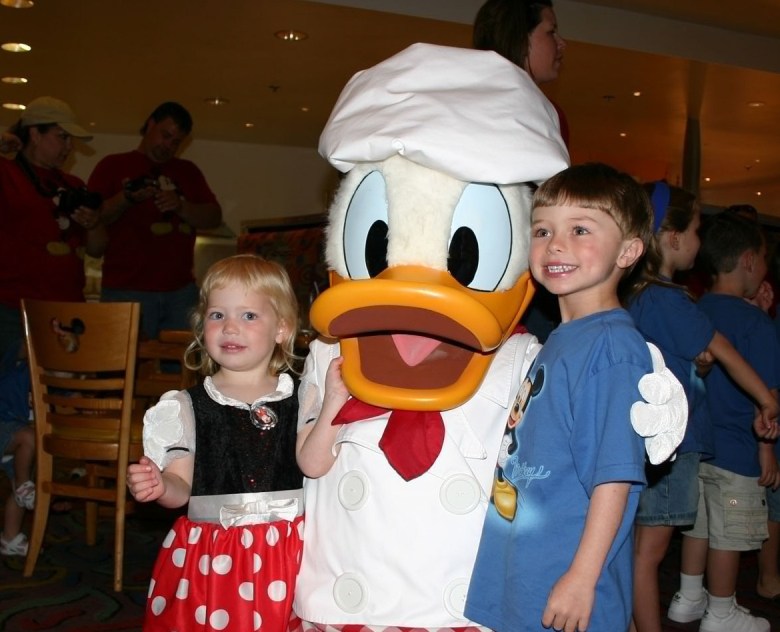 The couple at the next table in the upscale restaurant eyed the two little kids in our group with decided distaste. Their mom was upset, but I convinced her we should simply ignore the dirty looks.

For one thing, I didn’t think the 3-year-old and her 5-year-old brother were misbehaving. True, a glass of milk got spilled and they were (somewhat) noisy and jumped around a bit, picking up crayons that had dropped on the floor. But so were a lot of the other kids at The Flying Fish, the noisy, bustling Orlando restaurant. Besides, we were smack in the middle of Walt Disney World and I figure anyone who is dining at one of the 300-plus eateries here has got to be prepared for kids at the next table (unless they’re at the Victoria and Albert, Disney’s only adults-only restaurant.)

That said, wherever you take your kids out for a meal — at home or while traveling this summer — it’s good to be prepared with a pad and paper (I taught 5-year-old Ethan how to play hangman) and even some crackers. I was disappointed that Disney restaurants — so quick with the kids’ menus and crayons and awesome kids’ desserts (how about a white-chocolate puzzle that came with a brush and different color frostings so they could “create” their own desert?) — didn’t immediately offer some Mickey-shaped crackers when we sat down.

If you haven’t been to Disney World or Disneyland in a while, you’ll be surprised by the quality and variety of the food. It’s no longer about overpriced burgers and fries (though you certainly can find those). Try an Asian-fusion eatery (Yak & Yeti at Animal Kingdom) or check out The Wave at Contemporary Resort, which promises organic beers and American cooking.

Of course, the kids with us preferred the old standards – like eating in’50s-era “cars” at Sci-Fi Dine-In Theater at Disney’s Hollywood Studios and watching old cartoons on the giant movie screen, all designed to make us think we were at an old-fashioned drive-in, complete with stars twinkling above us. I thought they’d also love the Coral Reef at Epcot, with its giant aquariums and scuba divers that feed the fish, but the service was disappointingly slow and 3-year-old Hannah got an earache that necessitated some of us making a quick exit. (Be prepared for anything with young kids!)

There are a lot of healthier options too, if you can get the kids to eat them.) Kids meals now come with fruit or vegetables and juice, water or low-fat milk and there are fruit carts around the park.

When I booked reservations, I was asked if anybody had allergies so that the information could be noted. (Don’t be shy about dietary requests either. Walt Disney World gets more than 7,000 such requests a month — just call a few days in advance if you need meals free of gluten, eggs, dairy or peanuts, for example.) Another tip: Whether you are at Disney World or a favorite city this summer, book reservations. With young kids, earlier is better. You can always change them.

But even at Walt Disney World, you may not be able to get a table at the restaurant-of-the-moment. If you have a little princess who wants to dine with Cinderella, book as soon as you book your trip and even then, you won’t be guaranteed a spot. Same with dinner at the California Grill atop the Contemporary Resort, with terrific food and a first-rate view of the Magic Kingdom fireworks. (Call 407-939-3463 for dinner reservations.)

A tip from Disney VIP Guide Maureen Murphy (Yes, Disney offers VIP guide service to steer you through the parks, though they don’t offer front-of-the-line access): the Princess Storybook meals at Epcot’s castle-like Akerhus Royal Banquet Hall are an easier reservation to get.

We opted for Chef Mickey’s breakfast at the Contemporary Resort where the kids were so enthralled by Mickey, Minnie, Goofy and the rest of their pals, getting autographs and hugs, posing for pictures, that it was tough to get them to eat their breakfast, which was surprisingly good.

Choose your character meals (and you probably will never pay more for the kids’ eggs and pancakes!) based on your kids’ favorite characters — Breakfast with Winnie the Pooh and friends at The Crystal Palace in the Magic Kingdom or Lilo and Stitch at the Polynesian Resort; lunch with Chip n’ Dale in Epcot, or the gang from Playhouse Disney at Hollywood and Vine at Hollywood Studios, Dinner with Cinderella at 1900 Park Fare at the Grand Floridian Resort.

Be prepared with cameras, autograph books (we filled up two!) and pens. Rest assured that the characters will stop at your table. These meals, while pricey, are a great way to get those autographs, hugs and pictures (with mom and dad too!) without waiting on the inevitable lines in the parks.

Another tip: If you are planning to spend your entire time at Walt Disney World (or Disneyland in California) consider the well-priced meal plans that you can add on to your room/tickets package that even include a daily “snack.” Disney officials say you can save as much as 40 percent at more than 100 restaurants and quick-food places throughout the resort. (Book packages by June 22 for certain dates in August and September and you get the Disney Dining Plan free at Disney World. Visit www.disneyworld.com or www.disneyland.com for details.

There’s one drawback: If you have any junior foodies under 10 in the group, they’ll be limited to the kids’ menus. The other drawback: It seems so many people are opting for the dining plan that reservations are needed. Remember, you are really booking a “priority seating” time, which means you may need to wait when you arrive, as we did several times. It’s always good to get there a little early, especially with hungry kids in tow. “Birnbaum’s Walt Disney World Dining Guide” ($11.95 is a good resource, as is www.disboards.com, the Internet’s largest unofficial guide to Disney World, where you can search restaurants by menus, meal type, location and chat with families who have been there and eaten that.

See you at the Castle. I’ll be the one chatting up Cinderella.