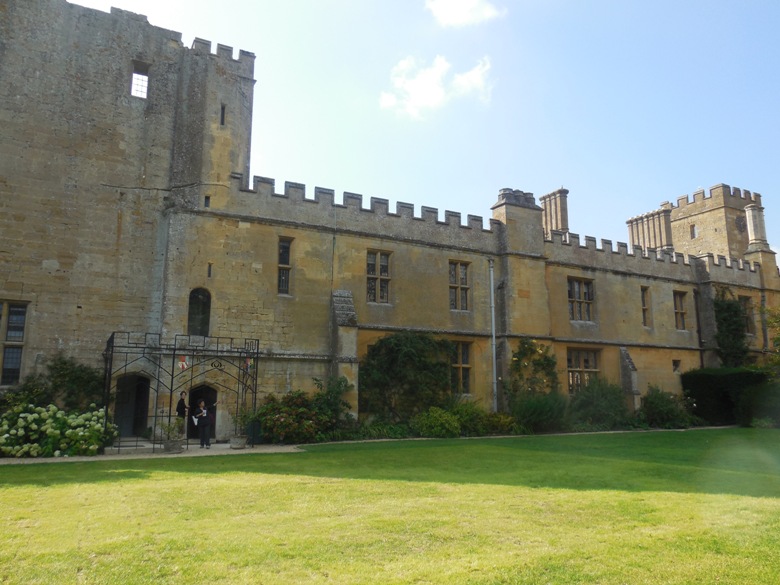 THE COTSWOLDS, Great Britian (Day One) — Let’s play dress up!

Maybe you’d rather hear a ghost story, head to the playground or race around the garden, playing hide and seek in the huge hedges.

All that and the chance to learn some English history at a bonafide castle that was home to kings, queens and now a 21st Century family headed by an American—Sudeley Castle is in Britain’s famous Cotswolds in the ancient Saxon town of Winchcombe, about a tour hour train trip from London’ Paddington Station.

The name Winchcombe means “valley with a bend” and the town still has streets that curve with historic houses and buildings with steep pitched and thatched roofs made from the traditional Cotswolds stone. Honestly, this place is so perfect you think it is a film set. As far back as the 9th Century, Winchcombe was one of the most prosperous communities in Britain. Here as elsewhere in the Cotswolds were sheep whose wool was exported throughout Europe.

This castle, it turns out, is associated with some of the most famous names in British history including King Henry VIII, Queen Elizabeth I and King Charles I. Lady Elizabeth Ashcombe, who was raised in Kentucky and is now a grandmother in her eighties, inherited the castle from her first husband after his untimely death and has been welcoming visitors for decades—as well as her family who have apartments here.

She wants visitors to know this castle tells the story of resourceful women, including Henry VIII’s last wife, Katherine Parr, the only queen to be buried at a private castle in the ancient chapel.

Richard III set about transforming Sudeley into a home for a king but he was killed two years later in battle.  (His body recently was found under a parking lot in Leicester.) He was succeeded by Henry VII and then Henry VIII who spent time at Sudeley with Anne Boleyn in 1535—a year before he had her beheaded.

Katherine Parr, Henry’s final wife, came to live at Sudeley after he died and she remarried. Sadly she died soon after giving birth to a daughter who it’s believed also died as a young child.

In the 1830s, William and John Dent, wealthy glove makers, decided to buy the ruined castle and restore it; they left the medieval buildings in a state of ruin so they could be preserved. Their descendants continued to inherit the castle and the estate—death taxes shrinking it to just a tenth of its former size.

Mark Dent-Brocklehurst inherited the estate and brought his wife Elizabeth—they met on her first visit to New York—to London. The castle was on the verge of falling down. By 1969, the young couple decided the only way to preserve the castle was to open it to the public and family treasures were sold to finance the renovation.

After Dent-Brocklehurst’s death in 1972, Elizabeth remained with her two young children and has devoted the rest of her life to restoring and preserving the great castle. She remarried and w widowed again last year.

“Ever since I have lived at Sudeley and watched two generations of family growing up here, all children have loved hiding and playing games in the yew hedges,” Lady Ashcombe said. “That is their favorite place to play in the garden along with the Adventure Play Ground which is part of the Visitor Experience.”

Her son, Henry Brocklehurst, added: “My kids like to play medieval battles with wooden swords and bow and arrows. The yew hedges provide a maze like environment and are great for hide and seek games. Visiting the castle is English history made fun….Kings, Queens, ghosts, animals and lots of great areas to play in as well as yummy food in our restaurant.”

While adults try to absorb the history, kids dress up as kings and princesses, check out the exotic birds — peacocks, snowy owls, rare pheasants –and climb the “Haunted” Staircase . They make their way around with a “Brock the Badger” guide –he was a real badger who actually lived at the Castle as a family pet.

He suggests they look for badgers in the priceless tapestry!

Kids love the red velvet toilet designed for queens who incidentally had someone assigned to wipe their bottom! That was considered a great honor, tell the kids.

Coming next spring, a live willow maze modeled after Wind in the Willows.