Exploring African-American history in Washington, D.C., and beyond

Talk about the best birthday present ever.

You’ve got to think that Dr. Martin Luther King Jr. will be smiling down as we, on the same day, celebrate his birth and the second inauguration of Barack Obama, our first African-American president.

Ask your kids if they think Dr. King could have ever imagined this day when he gave his famous “I Have a Dream” speech on Aug. 28, 1963. On steps of the Lincoln Memorial, in front of 200,000 civil rights supporters, he resolutely called for an end to racism in the United States.

“I have a dream, that my four little children will one day live in a nation where they will not be judged by the color of their skin but by the content of their character,” Dr. King said. “I have a dream today!”

Dr. King began his speech by noting that the Emancipation Proclamation freed millions of slaves in 1863, “But one hundred years later,” he said, “the Negro still is not free.”

This January, of course, also marks the 150th anniversary of the signing of the Emancipation Proclamation and I can’t think of a better time than this winter — February is Black History Month — to explore civil rights in Washington and beyond — once the inauguration crowds have gone, of course. (FYI, February is typically a great month to snare a hotel deal.)

Tourism officials in Washington, D.C., in fact, have created an entire Martin Luther King-inspired itinerary, as well as one inspired by the Civil Rights Movement.

At the same time, Throughout February, Mount Vernon, just outside Washington, D.C., in Virginia, will highlight the lives and contributions of the slaves who built and operated the home of George and Martha Washington. (Visit President’s Day weekend, Feb. 16 to 17, for a special birthday weekend celebration. Come on Feb. 18 — the national observance of George Washington’s birthday — and admission is free.) You can also visit the Slave Memorial and Burial Ground. (Throughout February, interpreters in the slave quarters, re-opened in 2010, will explain slave life.)

Of course, your visit will start at the Martin Luther King Jr. Memorial located on the National Mall. After 20 years of planning, the monument was unveiled in 2011. It’s the newest monument on the mall and the first memorial not dedicated to a war, a president or a white man. Ranger programs and site tours are available throughout the day. (Look for signs in the memorial for the next program’s location and start time.) The Martin Luther King Jr. Memorial is near the Franklin Delano Roosevelt Memorial, in sight of the Lincoln Memorial to the northwest and the Jefferson Memorial to the southeast.

Kids can pick up a Junior Ranger booklet at the information window in the bookstore. It includes activities and fun facts about the National Mall and Memorial Parks. 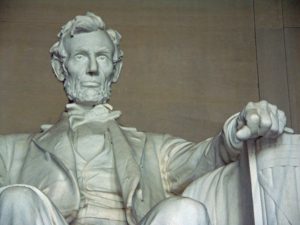 The Lincoln Memorial in Washington DC

(There is also a free National Mall app you can download and another one for Washington, D.C., family visitors available for $3.99 through www.familyitrips.com or from the iTunes store. Look for my new “Kid’s Guide Washington, D.C.” due out this spring.)

When you visit the Lincoln Memorial — it is especially beautiful at night — ask the kids to show you the spot on the steps where King delivered his speech (it’s commemorated by a plaque). It took 28 blocks of marble to carve this giant 19-foot Abraham Lincoln. Look for the words of Lincoln’s Gettysburg Address and his Second Inaugural Address carved on the walls. Annually visited by millions, the Lincoln Memorial is the most-visited memorial in the National Mall and Memorial Parks.

Here are five more ways to explore civil rights history and the fight against slavery in our nation’s capital:

— Check out the Ford’s Theatre Center for Education and Leadership: The new museum expands upon the artifacts at the adjacent historic Ford’s Theatre. Learn about the Civil War-era president’s life, tragic death and lasting legacy. Several galleries trace the history of Lincoln’s presidency, while a gallery for temporary exhibits features contemporary information and artifacts related to the Civil War and civil rights movement.

— Peek inside a Civil War-era spy’s life at the International Spy Museum.

— Take a stroll along African-American Heritage Trail. Explore the trail to learn about popular and lesser-known sites of significance to D.C.’s black heritage, like the U Street Corridor, nicknamed “Black Broadway” for its ties to musical legends like Duke Ellington and Etta James and performance venues like the newly reopened Howard Theatre.

— Put civil rights history in context with the new “Changing America: The Emancipation Proclamation, 1863 and the March on Washington, 1963” exhibit at the Smithsonian National Museum of American History.

— “The Civil War in America” exhibit at the Library of Congress where you will see more than 200 items — everything from a diary of a Georgia teen to Lincoln’s own reading copy of the Second Inaugural Address to strategic military maps, song sheets and newspapers — many never before seen by the public that will put a human face on the conflict.

Whatever you decide to do, a trip Washington, D.C., is a must-see for everyone interested in our country’s history and the valuable contributions African-Americans have made to make it what it is today.