Exploring around the Na Pali Coast 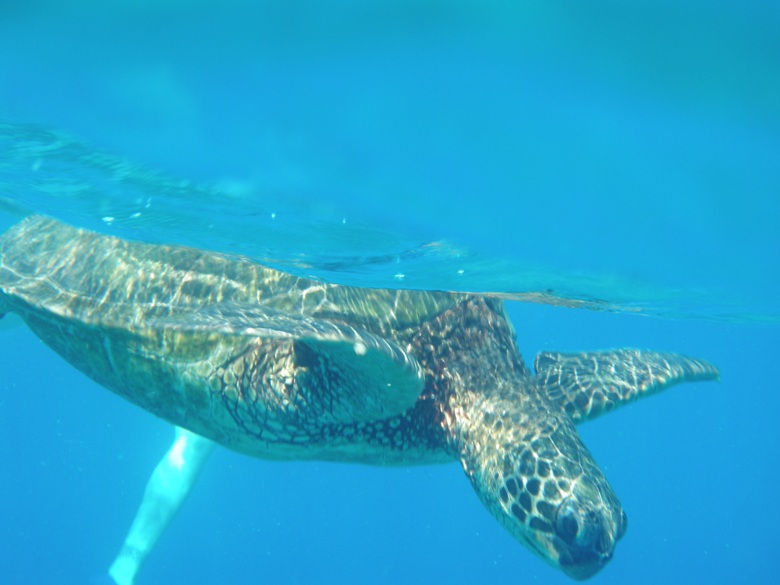 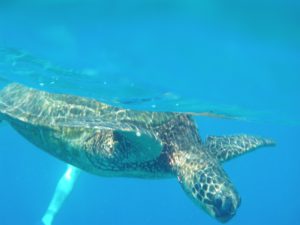 We are at the end of the road—literally.

We’ve driven to the end of Kuhio Highway on the North Shore of Kauai to Ke’e beach, past some of the most lush plants I’ve ever seen, spectacular  beaches with crashing surf.  (Yes, it was here that Mary Martin “washed that man right out of her hair” at Lumahai Beach) past the funky town of Hanalei (of the “Puff the Magic Dragon” song).

My daughters are going to hike part of the iconic Kalalau Trail—the start of the Na Pali Coast and one of the most famous hikes in Hawaii that goes first to Hanakapiai Beach then to a waterfall (eight miles round trip for that portion).  To go farther, you must backpack and get a permit.

On our way north, we’d stopped in Kapaa at Ono Family Restaurant which locals told me had one of the best breakfasts on the island.  They were right–asparagus omelets, banana and macadamia nut pancakes, Kauai coffee.  (The “Local Boy” is island Portuguese sausage, kimchee, and cheese.)

I feel we’re getting to the “old” Hawaii but when we get to the North Shore we’ve arrived.  Sure there’s the developed golf and beach community of Princeville with the St. Regis Hotel and Westin Vacation Villas but there is also the largest taro industry anywhere in the state.

Hanalei and beyond makes me think this is what Hawaii used to be like—one-lane bridges, narrow winding roads, shaved ice stands selling flavors like Li Hing Mui (sweet Asian plum) and Guava, small shops with colorful Hawaiian shirts hanging outside.

“It’s totally different here on the North Shore,” says Laura Richards, long-time resident who oversees the 52-unit condo Hanalei Colony Resort (www.hcr.com).  “The Aloha Spirit is alive and well here.  The lushness is more than any other island.  We are a step back in time–we haven’t moved into the 21st Century.  It is relaxed, laid back—only 4,000 people to the end of the road, and we take pride in being the native guardians of the land.”

Locals come to fish here just as their ancestors did.  Everyone comes for the beaches—to swim, to snorkel at Tunnel Beach, to kayak and surf.  “There is the real Hawaii feel—four or five days here and you are different person,” she promises.  “After a couple of days, you won’t remember what day it is you are so in tune to the beaches.  This is pure nature on its best.”

This is the place for those who want to do it on their own.  Yarrow Beydoun, Richards’ daughter and the mom of 13 and 10-year old sons says another plus is that kids can go anywhere here safely–fishing, boogie boarding, bike riding. “I can’t think of many places in the world I’d give them this much freedom,” says Yarrow, who with her husband runs the restaurant at the resort, Mediterranean Gourmet.

“Don’t just do paid activities,” mother and daughter urge. “Get in touch with nature on your own turns and find people who can help you do that.”

Another tip:  Don’t run yourself ragged trying to see too many islands.  Two for a 10-day stay is plenty. “The beauty is getting used to Hawaiian way, to settling down and relaxing.”

This isn’t a fancy resort—simply comfortable two-bedroom, two-bath condos on a stretch of beautiful beach where Richards, the general manager, will know your kids’ names by the second day, where you can attend a luau with just 80 people performed by a local family or have a BBQ at the new pool.

Did I mention there are no TV’s or phones in the units, though there is WiFi.  You can volunteer at the National Tropical Botanical Garden nearby (and get a room discount) or take a break at the spa while the kids join the Na Nea program—four hours of hands-on crafts and Hawaiian culture  (just $15 as opposed to $60 at major resorts).  “This is an opportunity for families to reconnect with the kids.”

A condo here is less than one room at a big resort hotel, but it is an entirely different experience than being at one of them like the St. Regis Princeville (www.stregisprinceville.com) that is in the manicured community of Princeville boasting one of the most beautiful golf courses on the islands as well as a reef in front of the hotel on Hanalei Bay.  This is a true luxury resort—elegant, understated and staid.  Lots of honeymooners and well-heeled families stay here.

This is the kind of place I’d worry, though, that my kids were making too much noise at the pool.  There is a brand new Young Voyager kids’ center overlooking the Bay with one-of-a kind programs taught by marine biologist and former teacher, Paul Clark, in partnership with Save Our Seas (www.princeville.biz).

There are private snorkeling tours, the chance to learn how to shoot underwater video, the chance to learn about the fish on the reef and then go out to look for them, tide pooling, palm leaf weaving, night snorkel and beach exploration, stargazing and more–$60 for a half day, $100 for a full day..  He can take young kids too because the program is licensed as a state child care center.  “This is such a unique spot that you van still find creatures you won’t find on the other islands,” he promises.

We pick up the girls at the trail head, muddy and smiling.  “Shaved Ice??” they demand.  We stop in Hanalei where there is a long line at the shaved ice stand–it starts raining (it always rains up here!)  We putter around the little shops buying tee shirts at Spinning Dolphins, Maui chips, and macadamia nuts at the local market, buying sarongs and glass roosters (we see roosters everywhere here).

We savor every bite of the shaved ice.