Exploring in and around the historic Adriatic city of Dubrovnik 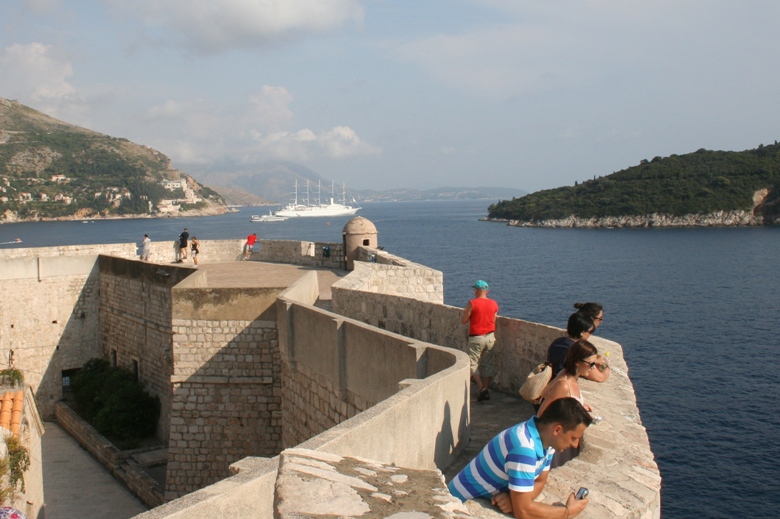 Where is my pedometer when I need it?

It’s over 90 degrees and terribly humid and we’re  walking Dubrovnik’s famous 14th Century walls with its view of the red rooftops, the sea, the kayakers and sunbathers and our ship, the 315-passenger Wind Surf.

Another plus of sailing on a small ship is that she can anchor just off shore–a five minute tender ride—rather than the larger port 20 minutes away.

Everyone says Dubrovnik is the “jewel of the Adriatic” and it’s easy to see why–it’s Old Town is a UNESCO World Heritage site with its cathedral, monastery–including the oldest drug store in Europe, operating continuously since 1317 and the second oldest synagogue in Europe dating back to 1652. Today, there are few Jews left in the Old Town and no Rabbi, we learn.

“Everyone assimilates. We’re one big melting pot,” our young guide Vedrana Vukosan tells us.  It is amazing looking around this pristine, preserved tiny town with less than 1500 residents that was under siege from November 1991 to May 1992 by Serbian and Montenegrin forces.  The city was bombarded from the air and sea.  More than 15,000 people fled the city.  Electricity and water were cut off.  “We used the old cisterns in the city,” said Srdan Kristic, who helps run one of the large tour agencies here and was 18 at the time (www.elite.hr). “It was very hard for everyone.”

The city’s medieval walls helped and there was tremendous international publicity decrying the bombing of this historic city and in favor of granting Croatia diplomatic recognition. During the 1990s, money poured in for the restoration of the scarred facades and terra-cotta rooftops. Today you would barely know a war took place here a scant two decades ago as tourists wander the narrow crooked streets, licking ice cream cones, stopping on impossibly narrow streets where tables have been set out for a beer or a pizza.

There is much to do here that we couldn’t manage in a single day—I would have loved to kayak along the coast or visit the neighboring Elafiti Islands. Or travel nearby to Lockrum via ferry. There are vineyards (Southern Dalmatia makes really good wine) to visit and even scuba diving.

Instead, since this was our first visit, we opted for an excursion from the ship that took us through the Historic Old Town to see the Dominican Monastery—from the 15th Century, the Cathedral and the Bishop’s Palace that originally was built in the 15th Century but has been rebuilt several times since.

We loved the local market where we bought prize-winning fig jam and sage honey from  Nina Sardi—her family has a farm near here—who pocketed the us dollars with a gesture to her 17 year old daughter, saving  all the dollars goes into her college fund. There is wild oregano and lavender at all the stands.

What’s in this jam—just figs, lemon juice and sugar, she says.

For lunch we drive about a half hour east into the countryside on narrow winding roads, past vineyards, to eat next to a brook where we feast on baked trout, roasted veal, and potatoes cooked over an open fire  in dutch ovens. Did I mention the homemade bread and the local wine (Konavoswki Dvori)? We walk down to Watermills Divahovic which is still operated in the traditional way—the way villagers would come from their villages to have their barley, corn and wheat made into flour. Sure it was touristy and a bit hokey but I was glad for the chance to see a bit of the countryside when we only had one day—and to get out of the heat of the Old Town.

The majority of tourists come via cruise ship and it is a shame we don’t have more time. “We want tourists to know they can come in the winter too,” said Srdan Kristic. “It is still mild and not so crowded!”

But the high point of our day was walking the walls. It is only about a mile and a half around (and $14 for the privilege) but you go up and down steep stone steps. The views are worth it—of the clear Adriatic, the neighboring fortresses, the fully repaired terra cotta roof tops with their flowers and plants and inevitably laundry hanging to dry.

According to local legend, Dubrovnik first developed in the 7th Century. By the 15th Century, gold and silver as well as salt production was important here and it was an important trading center on the coast, a link between the Mediterranean and the Baltic. Most of the original construction took place during the 13th Century. Much of Dubrovnik was destroyed by earthquake in the 15th Century—but the walls were reinforced with towers over the following 40 years. Kids we saw loved checking out the bastions and the walls—80 feet high and up to 10 feet thick on the sea side—even thicker on the other side.

The earthquake killed more than 5000 people and marked the beginning of the economic decline of Dubrovnik.  So sad!

I try to imagine people walking these walls so many centuries ago. Were their kids annoying them? Did they get tired of going to church and cooking and cleaning?  How did they stand the heat?

I’m glad to return to our 21st Century yacht and air conditioning.

We eat dinner under the stars at Le Marche, the small on-deck restaurant (only at night) where we’re served a set menu–salmon tartar, yuna sashimi, crabmeat and shrimp cocktail…lobster bisque…Greek salad,  lobster tail and mussels and a  chocolate terrine for desert.

It is very small—no more than a dozen or so tables…the ocean breeze is balmy, the seas calm. The food delicious…the sails billowing….