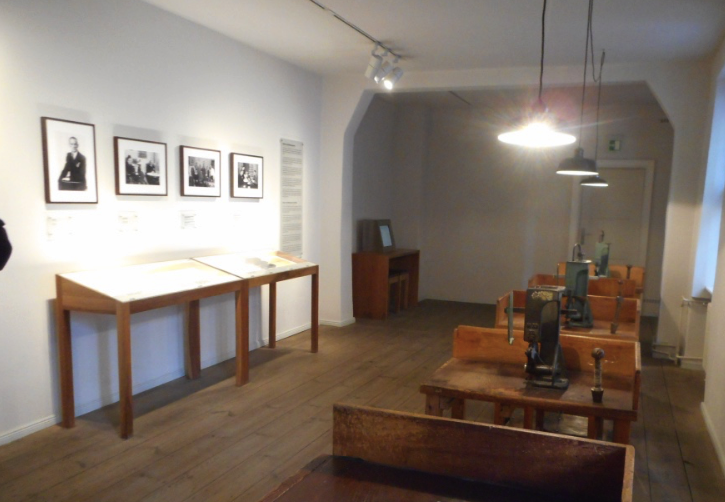 BERLIN (DAY 4) — What would your kids take if they were leaving their home forever?

One boy named Herbert took his compass when he left Germany for Chile in 1939.

Alice, 10, took her poetry Album and Rudi his model construction kit. When Gert left in 1939 without his parents for Sweden, he took his much loved stuffed monkey.

The Jewish Museum, Berlin traces Jewish history here from Roman times through the Holocaust and up until today with exhibits that show kids as well as adults the reality of what happened here.

You can’t visit Berlin without considering the horror of the Holocaust–the six million European Jews (600,000 of them German-born) who perished. Countless others had their lives uprooted, among them millions of children. Germany’s capital city confronts the horror head-on at places large and small. Everywhere you walk you’ll notice “stumbling stones,” small brass plaques embedded in the cobblestone walks that memorialize those who had last lived in the location before being deported into exile or a death camp. They are by artist Gunter Demnig.

At the Jewish Museum in the central city area and one of the largest Jewish Museums in Europe , architect Daniel Libeskind , who designed One World Trade Center in New York City, designed the two modern buildings with “Voids” — empty spaces that slice through the building and represent what can’t be exhibited because of the erasure of so many Jewish lives in Berlin. There is a haunting sculpture by Israeli Artist Menashe Kadishman called “Fallen Leaves” with over 10,000 metal faces covering the floor that you walk over—they clank as you do—a testament, the artist said, to all innocent victims of war and violence.

Historian Johannes Schwarz took us on a tour of Jewish Berlin through the company Milk and Honey Tours. Before World War II, he said, there were some 200,000 Jews here—now just 13,000. About 80,000 Jews left between 1933 and 1939. Anyone who could afford to left. Another 55,000 were deported from 1941-45. There was a Jewish community here as far back as the 13th Century. The modern Jewish community dates back over 340 years. Berlin, in fact became the center for modern Judiasm—the first woman rabbi in the world, Regina Jonas, lived here and was ordained in 1935; she later died in a concentration camp.

We visit Otto Weidt’s tiny broom and brush factory in a building at Rosenthaler Strasse. He hired deaf and blind Jewish workers and when the Nazis moved to deport them he managed to save 27, arguing that his products were crucial to the war effort. There is a Berlin branch of the Anne Frank House and a “Silent Heroes” exhibition about the people who helped the persecuted Jews.

We visit the outdoor statue to the women who protested the incarceration of their Jewish husbands in 1943. They were non-Jews married to Jewish men who were working as forced laborers. When the SS rounded many of them up, some 2,500 women joined the wives and protested on Rosenstrasse for nearly a week. Incredibly, the Nazis let them go.

Sometimes, even officials stood up for what was right. In the pogrom of Nov 9-10, 1938 district police chief Wilhelm Krutzfeld managed to stop the Neu synagogue from being burned because he said the historic building had landmark protection. The building later was severely damaged by bombing and was torn down and rebuilt in the 1990s.

Schwarz, who is in his 40s, notes there are small remembrances around the city as well as the major one like the haunting Holocaust Memorial—block after block of different sized concrete bricks designed to make you feel lost in the middle, just as the German Jew were.

At the Place of Remembrance, we see the signs that connoted Hitler’s progressively egregious campaign to deprive Jews of even their most basic rights, starting in 1933 with fanciful signs that held such sinister meanings. A rubber stamp meant Jews could no longer serve in the civil service; car keys meant Jews couldn’t have a driver’s license or have a car registration in 1938. A chessboard meant Jews were expelled from the Greater German Chess Association and a thermometer meant Jewish doctors couldn’t practice any longer.

Horrific. But as you explore Berlin, it is important to remember those that tried to help–and think of those we all should be helping today. In its acceptance of refugees from war-torn nations, Germany, of course, is setting an example for the world.