Exploring Malta and its rich history 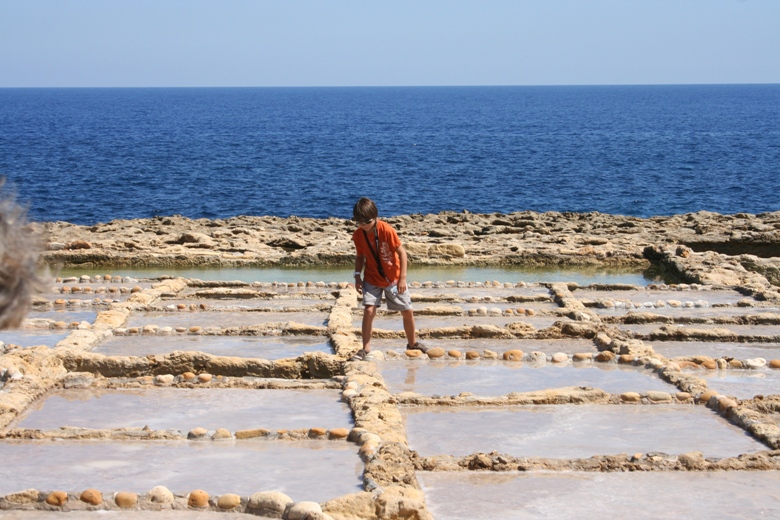 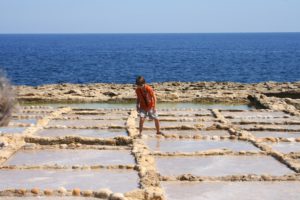 Checking out salt mining on Malta

DAY FIVE – We’re in Malta, so where are the Knights?   The city of Valetta, Malta’s capitol, was built by the Knights of St. John who came here in 1530 to protect the pilgrims.

Today, pilgrims of a different sort are still big business here—tourists and especially cruise passengers. Like us. Malta is our first stop on an 11-day Disney Med cruise that started in Barcelona.

We’ve signed on for the Adventures by Disney program (www.adventuresbyDisney.com), new to the cruise line which means we have a more “intimate” experience (just 48 people in our group) with local guides and the chance to go places on our excursions where other cruise passengers don’t necessarily get to go. Passengers pay a premium for the program and it usually sells out because well-heeled families don’t want to sweat the details—especially with kids along. And the freight isn’t bad when you figure that regular shore excursions are pricey. ”All you have to do is show up and enjoy the day,” explains Mickey Davis, traveling with her husband Ned and nine year old son Dylan and seven year old son Connor.

“It’s such a relief,” especially with two young always enthusiastic guides who know the kids names, their food allergies and always have a joke to entertain them. For Shelley Morley, traveling with her husband, three daughters and father celebrating his 80th birthday, the clincher was being able to avoid lines at places like the Coliseum and Sistine Chapel. “It is Nordstrom, rather than Target,“ she says, adding that her elderly dad can’t wait in line for two hours any more than her three kids can. “There is a lot at stake,” when you don’t want to waste precious and expensive vacation time.

The Carpenters, who now live in China but are from the Midwest, have kids 14, 12 and 10. “When you look at all the research that goes into every destination, it takes a lot of time and effort.”

They were happy to let the Disney folks do the work for them, finding what the kids and they would enjoy the most.

So here we are on a blue sky day on Malta positioned just south of Sicily and north of Africa, making it a strategic locale as far back as the Crusades and during World War 2.  The three small islands that make up Malta have only about 400,000 people. Of the five islands, only two are inhabited—Malta and smaller Gozo, where we spend much of our day stopping at a craft market (Malta is known for its famous filigree silver and gold) watching a glass blower, admiring the “Blue Window” formation in the rock that indeed looks like an arched window looking into the sea. We eat lunch on a restaurant terrace overlooking the sea, tasting typical fare –sheep cheese, grilled vegetables, brochette with local tomatoes as well as local fish and grilled potatoes. We see wild fennel and rosemary growing, figs and more. But the best part of the day for the kids is after lunch when we amble down to the beach and swim in the warm, clear waters of the Med, sailboats in the distance.

Malta has always been a crossroads and Maltese, the language spoken here along with English is a combination of many languages—it is the only Arabic root language written in Roman letters. The harbor is in stark contrast to the pale limestone walls that everything is built from.  The city itself dates back to 1566 when the first cornerstone was laid by the Grandmaster of the Order of Saint John, Jean Parisot de la Valette, and from the beginning, the city has had thick walls, a fort and fortifications—which survived some 3000 German and Italian air raids during World War II, our local guide Fiorella Farrugia tells us.

Another plus to touring with Adventures by Disney: Not only do we have local guides wherever we go, but they’ve been vetted by Disney so that means they can interpret the environs in a way that make then interesting to kids and adults alike. I’ve been on plenty of tours where that isn’t the case.

Nor do we have to agonize about which of the scores of shore excursions to choose. “I wanted something preplanned,” said Alchera Ayyad, here with her husband, 10 year-old son and seven-year-old daughter from Southern California.   “It took enough planning just to get here! I thought this would be a good introduction for the kids t do bits of Europe an then later we can revisit.”

The main industry today is tourism but this isn’t a cheesy port with vendors everywhere. It is starkly beautiful with its ancient walls, brightly colored doors, flags flying and narrow roads. Playmobile toys are manufactured here. We stop at a salt pond to see how sea salt is excavated.  Our local guide tells the kids that at one time salt was traded in exchange for labor, thus the term salary.

All that was missing was a pick up soccer game with local kids.