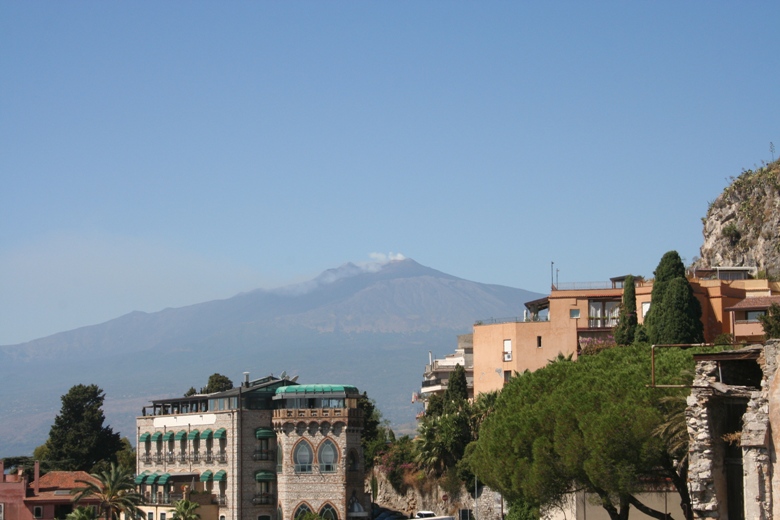 Aldo Valerio greets us with kisses, like friends he hasn’t seen in a long while.

In reality, we’ve never met except through email. Valerio runs a tour company called www.secretitalia.com and also works with a Canadian based company www.toursbylocals.com that puts together guides with travelers—especially those who are cruising and don’t want to be limited to ship excursions.

Even though we’re sailing on the 315-passenger cruise ship Wind Surf, I found the shore excursions limiting and expensive. But more than that, the itineraries don’t leave you much leeway if you find something you like—or don’t like.

I wanted to see how arranging guides on our own would be. Others were striking out literally on their own, taking the rain to the town of Taormina, about 60 miles south of Messina where we’re docked, and then a bus up to the historic town.

Truth be told, that is the cheapest way to go. But Valerio points out that if you’ve got four or more people, hiring him likely will cost less than what a tour excursion does and you can focus on your interests, whether history (Taormina is on a hill overlooking the sea and was founded in the third century BC and then later renovated by the Romans. It is known for its 3d century Greco Roman theater.

We were more interested though in seeing Mt. Etna erupt in the distance (“It always erupts for tourists,” Aldo jokes) and buying local olive oil in a market Aldo showed us where locals shop. “I try not only to talk about the history,” he says. “I try to talk about the culture and make jokes.”

We stop for an antipasto and a glass of wine at the Ristorante La Griglia overlooking the terra cotta rooftops from the open window where we sit and where we are the only people in the place speaking English. We’re served grilled eggplant (a local specialty), olives, sun dried tomatoes, salami, cheese and freshly fried mozzarella. We’re too stuffed to even try the local pasta specialty Pasta La Norma with eggplant and ricotta.

Valerio explains the laid-back Sicilian lifestyle where children typically live with their parents until their 30s and even after they are married, share the same house, “and the mother in law cooks!”  There are long siestas after the huge lunches.

The villages where scenes from the Godfather movies were filmed are nearby–Forsadagro and Savoca–and there are plenty of Mafiosi “but you won’t know them if you see them,” he explains… It is all behind the scenes.”  Taormina is an example of a place easily explored on your own. (I would have liked to see the villages surrounding Mt Etna but that required a two hour drive from our ship – not enough time.)

But getting there is a challenge. That’s why some people prefer a cruise-arranged excursion… there is no worry about finding your way or returning to the ship on time.  Others prefer the adventure of making their way on their own, the freedom and of course, saving the money.

Others are willing to take the risk. Richard Burgess and Anh Vu, from Houston, Texas, took a train, then waited for a bus for 40 minutes before getting to Taormina – 2.5 hours of travel for what should have been a 40-minute trip. “That’s why we opted for a taxi on the way back,” Anh says.

“You make mistakes the first time and then there isn’t a second time,” said Janet Wagner, who is from Savannah, Georgia. That was one reason she and her husband Steve opted for a shore excursion to Taormina and also to Pompeii.

We walk Taormina’s cobblestoned streets, venturing down tiny alleys. “That is where all the locals are,” he tells us.  Beach towns like Giardini Naxos line the Coast. This is where many Italian tourists from the north come for vacation.

I love the giant puppets—traditional here where stories are told of Knights fighting for the princess’s love.  “Dolce Far Niente,” Aldo tells us.  “Sweet Life,” which means being relaxed and not worrying about getting things done apparently.

So if there were six of us—transportation and guiding would have cost 370 Euros (about $530) —less than paying $119 a person for the cruise excursion. But there is some stress, like when our taxi was 15 minutes late to get us because of traffic.

It’s not only about the price, though “It‘s like you’re meeting a friend,” he says.

And when you are traveling in a strange country, that counts for a lot.

Next:  A ghostly sight in the night