Families enjoy the all-inclusive activities at Curtain Bluff on Antigua 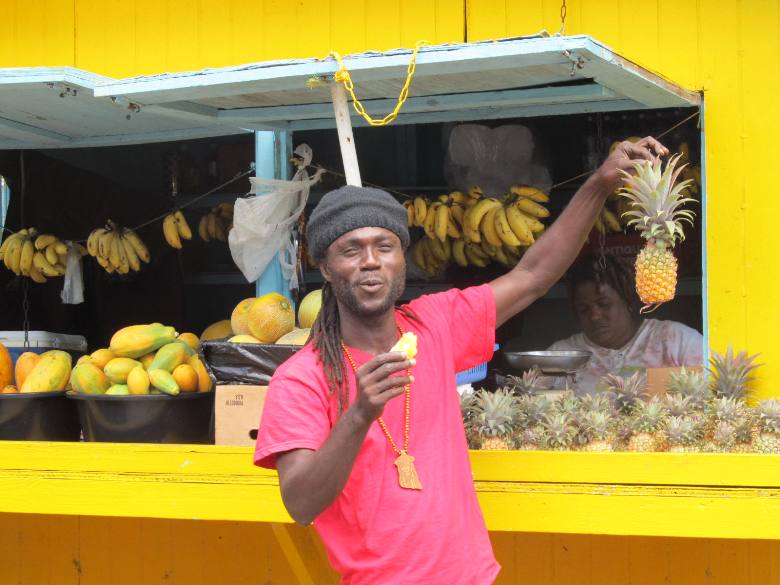 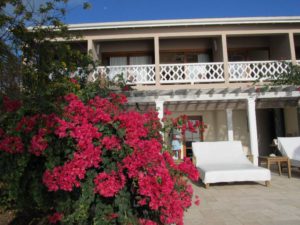 For 30 years, Alida and Rod McRae had stolen a week just for themselves in Antigua, often traveling with another couple.

“We took our boys other places,’” said Rod McRae, now in his seventies, though they did bring one son or another when they were in high school or college.

But this summer, they are returning to Curtain Bluff with their three sons and their families—five grandchildren ranging in age from 16 to six.

It will be a year shy of their 50th anniversary and McRae’s 75th birthday; they’ll celebrate one son’s 20th anniversary when they are here.  “It’s harder and harder to get everyone together,” said Alida McRae.

Rod McCrea likes that Curtain Bluff is not only considerably less expensive in summer but that the all inclusive nature of the property means he not only knows exactly what he is spending but that all of his kids and grandkids can do what they like–tennis and sailing, deep sea fishing and snorkel trips, not to mention all the fruit smoothies the kids can drink—or that their parents will allow them to mix up with the bartenders. 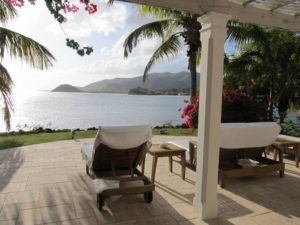 View from the spa at Curtain Bluff on Antigua

“But it’s really the people who make this resort different,” McRae says.  “When you arrive, everyone says welcome home and it is really genuine.  You feel like it is someone’s home.”

In fact it is Chelle Hulford, the widow of the resort’s founder Howard Hulford still lives here and greets guests, taking her meals along with them. Today the resort is run by a trust managed in part by long time managing director Rob Sherman.

The McCreas are like other multigenerational families we meet  here and are exactly the customers Curtain Bluff wants to welcome.

“When I was a kid, my parents left us and they went away.  This generation takes our kids,” said Steven Rosenbaum, here with his wife, two sons and his parents.

“In this economy, it is a decision to take a vacation like this,” said Rosenbaum.  “It’s a lot of money.  This place offers tremendous value for your vacation dollar…it is like a warm embrace here…it doesn’t pain me to write the check.”

Kathy Rosenbaum likes that the kids can eat what they like and the staff is so accommodating—even her picky eater is chowing down at every meal. “I’ve never seen him eat so much,” she said.  And she and her husband were very happy not to have to pay extra for the three portions of French toast one son devoured at breakfast.

She also noted that one son who has a disability has done many things here he’s never done before—snorkeling and paddleboarding.  “He is completely relaxed,” she said.  And the options for the kids are amazing…there is no comparison to a regular hotel.”

Another family of 17 was just saying goodbye to their goodbyes after a weeklong stay that included a wedding in which the six grandchildren played a big role, ranging in age from two to eight.

“They’ve really catered to the kids,” said Dr. Tania Spenlinhauer, the sister of the bride and mom of three.  “I’ve really been able to relax.”

“The kids chased lizards and built sandcastles all week.  We didn’t even tell them there was a game room until yesterday when it started to rain,” said the bride’s mother Peg Spenlinhauer, who is from Connecticut.  “We could even give the older kids  some independence because we knew they’d be safe.”

Like other multigenerational families here who live across the country from each other, this trip was first planned as a family reunion.  When the bride’s dad and his second wife suddenly were able to come, she decided to make the vacation a wedding celebration.  And all of the pieces fell into place within two weeks, her mom said, showing off photos of the too-adorable-for words kids decked out in J-Crew dresses and the boys in green shorts (the adult men wore coral shorts).

When we honeymooned here 30 years ago, kids were only here over the holidays and Easter break.  There were no organized activities. 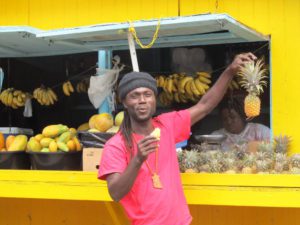 On the road near Curtain Bluff, an Antiguan enjoys local pineapple

Now the young GM Christopher Eastmond, himself the dad of a five year old, is working on putting some organized activities in place all year long—complimentary, of course.  He wants to partner with a local school so that the visiting kids can meet local kids and become pen pals and get a sense of what it’s like to live on this Caribbean island of 90,000 people.

Eastmond says he wants to preserve  “the magic dust” that has made guests return for 50 years –some 70 per cent are return guests.  “But as the resorts’ fans age,  we have to change some of the way we do tings…we have to compete.”

And that includes catering to kids, their parents and grandparents.  Staff know them by name.  There’s an budding herb garden and discussion of expanding it so they can grow their own vegetables and fruits.  Already, Eastmond said, local staff who farm bring fruits and vegetables to the resort where there is a bigger emphasis on local foods.

We enjoyed excellent massages at one of the best-located spas I’ve ever seen—overlooking a bluff, we could hear the waves crash. Afterward, we sat in the hot tub looking out at the sea, sail boats in the distance.

While there are no TVs in the rooms, the Internet is fast so if anyone must watch TV they can do it on one of the devices they bring with them, Eastmond said.  A second restaurant—Sea Grape is now open in the evening.  It’s where lunch is served but at dinner, it becomes a white tablecloth bistro where you can watch the ocean and feel the breeze; dinner is also served up on the terrace amid flowering bougainvillea.

When a lot of kids are in house, there’s an earlier kids buffet but this is the kind of place kids can eat with their parents and then safely wander off, as the 10 and 11 year olds of friends of hours did last night while we lingered over desert.

“We want to incorporate what’s new with the soul that is here,” said Eastmond.

And from what I can see, it’s working.  “We’ll keep coming back as long as we’re able,” vows Alida McRae.