Families flock to aquariums in the fall for fun and learning 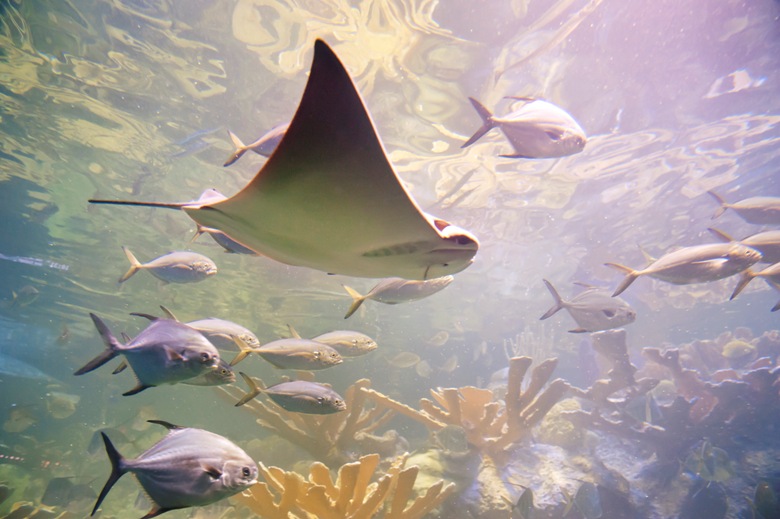 Are you ready to reach out and touch a shark?

Maybe you’d prefer a stingray, though they may feel “slimy,” offered 9-year-old Owen.

“It’s really cool,” promised their friend Cori, 10. All three were attending the New England Aquarium’s summer Harbor Discoveries Camps and had lots of suggestions for kids visiting the wonderful New England Aquarium for the first time. Tops on their list are the aquarium’s touch tanks, especially the one with the sharks and the rays — the largest such tank on the East Coast — and seeing the Atlantic harbor seals, outside in the front of the Aquarium, and the California sea lions and northern fur seals in the back.

In case you are wondering about the difference between seals and sea lions, the kids enlightened me: Sea lions can walk but seals can’t and seals have just a hole where ears should be, while sea lions have an external flap. “It’s hard to choose which one I like better,” said Emma, 10.

This has been an important few months for the New England Aquarium (read more in my recent travel diaries). It has transformed its iconic Giant Ocean Tank, which houses thousands of new animals, as well as favorites like Myrtle the sea turtle and the giant Pacific octopus. Myrtle, noted the kids, has been fitted with a camera “so you can watch where she’s going.” Cool!

Equally cool are the interactive exhibits as you wind your way to the top of the multi-story tank where you can search for the fish you are seeing. “I’ve never seen anything like this!” said Mahlon Page, 10, visiting from Indiana.

But every kid I met in Boston — at the aquarium and elsewhere — opined that one of their top experiences in the city was going out on a whale watch. The New England Aquarium partners with Boston Harbor Cruises for whale watches that guarantee you will see whales in Stellwagen Bank National Marine Sanctuary at the mouth of Massachusetts Bay, just 25 miles east of Boston. This is a rich feeding ground not only for whales but for dolphins, seabirds and other marine life.

Fall, of course, is a great time to visit an aquarium — and go on a whale watch with your kids, whether you have a day off from school, are enjoying a weekend getaway or a reprieve during a college tour trip. Some aquariums also offer sleepovers and behind-the-scenes tours for marine life aficionados. Aquariums are a place to learn about the creatures who live deep in the sea and along the shore in far-flung destinations — penguins from Antarctica, piranhas from the Amazon, exotic corals and the translucent jellies that live in every ocean (did you know jellies are 95 percent water?)

But just as important, aquariums are a great way to get a sense of local sea life whether you are visiting a region far from home or learning about the sea creatures who live where you do.

In Hawaii, many families stop in at the Maui Ocean Center, for example, to learn more about the fish they might see snorkeling or the green sea turtles and learn about Hawaii’s cultural heritage — showcasing the myths and history of the Hawaiian Islands at the same time.

At the New England Aquarium, there’s also the Gulf of Maine Exhibit where you’ll see creatures that live along the northeast coast — lobsters and giant sea stars, crab, halibut and cod, the Massachusetts state fish.

Here are five other aquariums where you can learn about the sea life just outside: 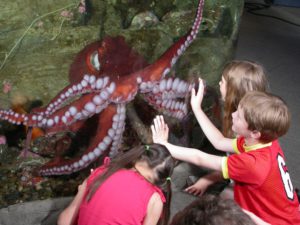 The octopus exhibit at the Seattle Aquarium

— The Seattle Aquarium located on the Seattle waterfront has exhibits where you can get to know the fish of Puget Sound (have you ever seen a ratfish?) There’s a touch pool that mimics local tide pools, you can learn about the struggling local orca population and what you can do to help and also meet the always funny otters, seals and birds that live along the coastal northwest shores.

— The Monterey Bay Aquarium right on the famous California coast in Monterey, Calif., is the place to watch humpbacks, blue whales (the largest creature on earth) and Orcas as they migrate right from the aquarium’s decks, as well as the otters that live in Monterey Bay. Everyone loves the giant Pacific octopus; explore the waters of the bay — check out the 200-pound sea bass. The exhibit is more than 90 feet long. Everyone loves the 28-foot-high underwater kelp forest and the chance to see the creatures the way divers do. Learn about how fishing practices are damaging our oceans and how we can support companies and restaurants that support sustainable fishing.

— The National Aquarium in downtown Baltimore’s inner harbor showcases the diversity of Maryland’s aquatic life, the Atlantic coral reef and the chance to watch training, feeding and playtime with the dolphins. Come face to face with Atlantic predators in Shark Alley in the huge ring-shaped exhibit. (Want to sleep over with the sharks?)

— The Shedd Aquarium in Chicago where “At Home on the Great Lakes” is now part of the famous “Waters of the World” galleries (travel the world to 80 habitats), highlighting the region’s creatures and hoping that in so doing, visitors will be inspired to help protect the Great Lakes. Touch a sturgeon, the largest fish in the Great Lakes. They can be as long as nine feet. (Did you know they were around since dinosaur days?) You can even record a story of an experience you’ve had on the Great Lakes.

Wherever you go, encourage the kids to take a virtual tour at home first and then let them lead the way. That way, the kids in Boston promise, everyone will have fun.

Parents and grandparents too.