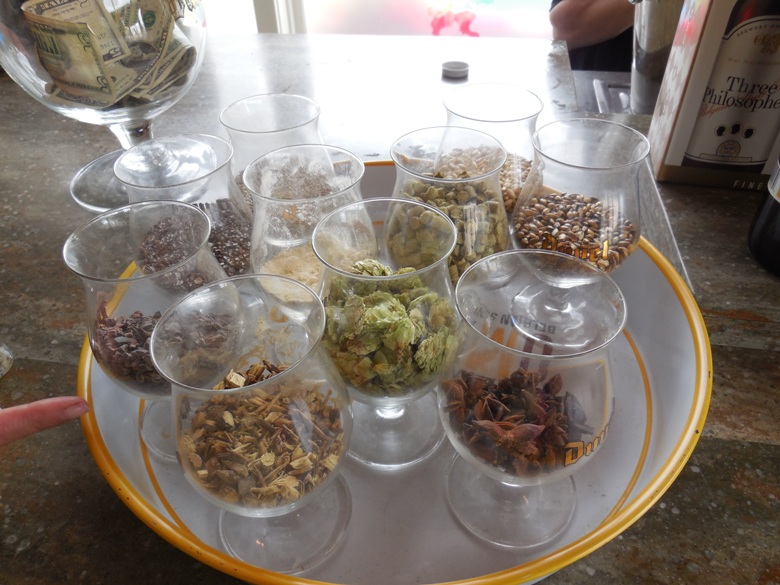 At the Farmer’s Museum in Cooperstown, NY,  Peg Young is making bread, fried  bacon and potato balls all over an open fire.  There will be rhubarb pie for desert.

Of course it’s 1840 at the Lippitt Farmhouse and in those days dinner was the mid day meal.“ Can I help?”  three year-old Willa asks.

She had just seen fresh milk—fresh from a cow that morning—that was going to be used to make cheese, butter and cottage cheese.  Lucky for Willa.  Young was baking bread and Willa could work her own small piece of dough.  The yeast is made from hops that grows on the farm.

In the bedroom—the beds were so small in 1800! –a master weaver is hard at work.   It could take 40 hours just to get the big loom ready, he explains.

The Farmer’s Museum is fun for kids and adults—the baby goats, the chicks, donkeys, turkeys, the chance for a ride on a horse-drawn wagon.  It’s also the chance to see what life was like here on farms in the mid 19th Century with costumed interpreters to help us understand.  One is making brooms in one shop; a blacksmith; a pharmacist grinding medicines in a third.  There’s a medicinal herb garden outside, a school house and stables.  At the print shop, the printer is laying type by hand to make a newspaper.  It was so labor intensive, he explained, they would only have a four-page weekly. Visitors could try their hand at the printing press.

There’s even a big exhibit on pick up trucks and toy trucks.  We learn Matchbox cars were born in 1953 when the daughter of  the head of Lesney Products  in England asked her dad to fashion her a tiny toy truck she could put in a matchbox to take to school.

Sure Cooperstown is famous for being where baseball was born and the Hall of Fame but it’s also a great place to show kids what rural life is like—and was like.

“People  want to know where their food comes from these days,” explains Willy Bruneau who with his wife Joan own the 128 acre Middlefield Orchard, where families come to pick  fruit—blueberries, raspberries, strawberries, peaches and in the fall, apples and pumpkins. The kids will play in the cornstalk teepee and the hay maze.  Local families “rent a tree”—an apple tree where they can pick hundreds of apples.  Joan Bruneau makes 20 varieties of jam that the couple sells at farmer’s markets along with the fruits.  Her favorite: A rhubarb jam that was her great grandmother’s recipe.  More visitors, she observes, are making a stop at a farmer’s market on vacation, chatting with the vendors, like the year-round Cooperstown Market selling cheese and honey, vegetables, home-made breads, cookies and pies, artisanal spirits made here, local maple syrup, huge flower baskets, even deer antlers as dog chews.

Families come to the orchard to have a picnic and pick fruit.  In the fall, no one will need a ladder for these apple trees. The Bruneaus say they’ve become an increasingly popular destination for visiting as well as local families. “They get excited because this was something they did as a kid and now they can do it with their kids and grandkids,” says Joan Bruneau.

Cooperstown has emerged as something of foodie destination, with  innovative restaurants like Alex + Ika on Main Street and its own 37-mile beverage trail. Did you know that Cooperstown was once the hops growing capitol of North America?

Cardamon… coriander… ginger, cumin and licorice root –who knew beer had so many spices in them.  We’re at the Ommegang Brewery where we’ve just had lunch (mussles and frites; bratwurst…) and a brewery tour where they produce almost 18,000 cases of beer a week that go to 45 states. (Yes this is the beer doing the promotion with Game of Thrones on HBO.)

There are over 100 breweries, nearly 400 wineries and 40 distilleries in New York State. Ommegang Brewery in fact is located on a 140 acre former hop farm where  they produce hand-crafted Belgium-style ales. Did I mention kids are welcome here?  They play outside and love the big communal tables in the café where they chow down on chicken and waffles, mac and cheese, grilled ham and cheese and Wagu Beef hotdogs.

Cooperstown is on the southern edge of Otsego Lake, a pristine glacial pond at the headwaters of the Susquehanna River.  On the shoreline in Cooperstown is the Otesaga Resort Hotel, in the tradition of great historic hotels.  It’s been in the same family for over 100 years. Enjoy dinner watching the lake in the Glimmerglass Dining Room; relax at the fire pit or go out in a canoe.  Our waitress tells us the fishing on the lake is great for trout and bass!  It’s nine miles long

Cooperstown was founded in 1786 by William Cooper-–the father of author James Fennimore Cooper–who bought a big tract of wilderness from a bankrupt Tory sympathizer and sold land to whoever wanted it giving them up to 10 years to pay off their debt.  Many say this was the first planned community. Cooper did all he could to help it succeed—even using his own money to store food for the harsh winters

James Fenimore Cooper set some of his works here and wrote his first novel on a dare from his wife.  He’s the one who dubbed the lake here “Glimmerglass” because of its smooth surface.