Families love the Four Seasons in Vail Co. for “glamping” and more 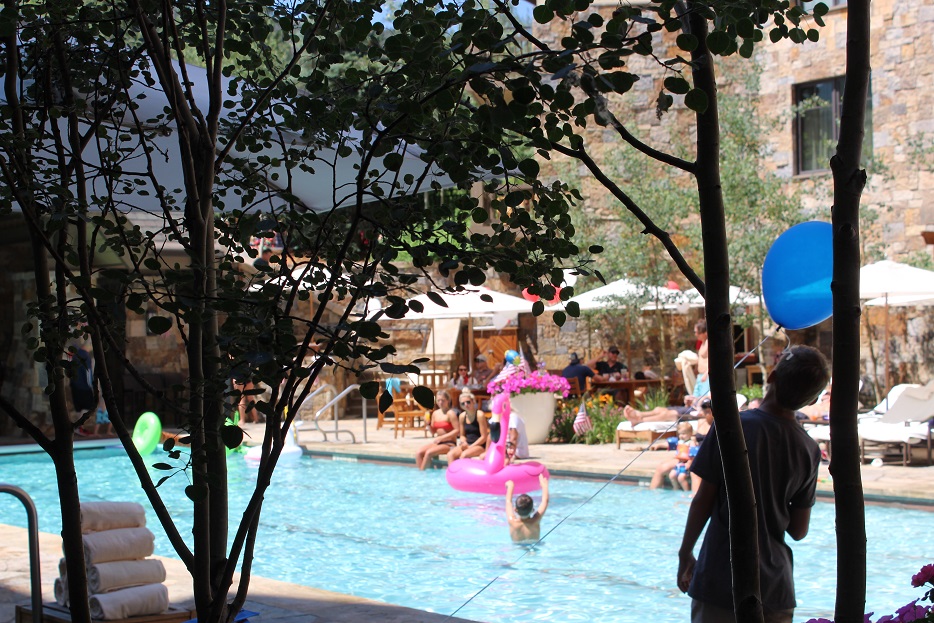 That’s why the Johnstons, including Kendall, 11, and Reagan, 13, have decamped from Denver to the Four Seasons Resort in Vail for their fourth weekend—this time the Fourth of July.

“You get a lot more for your money—the rooms, the food, the service at the Four Seasons,” said Melissa Bauman, here with three kids from the Denver suburbs.

The families especially love the little things—the smoothie shots at the pool, the kids’ carnival on July Fourth with crafts, face painting, bouncy house games like a potato sack race and ladder toss, popcorn and cotton candy, plus the ample pool toys. They get a welcome bag when they check in, can take their pick of kids’ DVDs from the hotel library, watching a movie in mini-sized robes and slippers, and play in a tent set up in their rooms, complete with blankets and slippers. “Glamping for kids,” jokes the general manager Brent Martin. The hotel isn’t too big either—121 rooms and 19 residences.

We’ve been staying in a two-bedroom residence unit that is double the size of most city apartments and better equipped, should you want to cook. It’s so comfortable–think big screen TV, comfy couches, big kitchen, steam shower—that it’s hard to rouse anyone to leave, though there is  a pool and big spa downstairs and much to do in and around Vail—hiking,  mountain biking, free concerts, Adventure Ridge at the top of the Vail Mountain Gondola with ropes courses, alpine coaster and ziplines. (one for the kids!)

Dana Le, here with her husband and two kids from Dallas, casually mentioned the family was going hiking; fifteen minutes later, she said, “there was a knock on the door and they brought up Gatorade, water and granola bars. That was really nice.”

That includes the traditional Vail America Days Fourth of July parade that goes right by the hotel on the pedestrian path; there is a lemonade stand (benefits to the Salvation Army) as kids watch locals in jeeps (veterans as far back as World War II)  in vintage cars, on bikes, skates, Segways and horseback, tossing out penny candy.

“Do we have any future marines?” one of the Vietnam War Vets asked kids watching the parade.

“I feel like Vail is a hidden gem in the summer and especially around the Fourth,” said Andrea Grohman, who counts herself lucky to live here. “There is just so much to do.”

And everything is walkable from the Four Seasons—Vail Village with Gore Creek where the kids love to splash and lots of restaurants like the White Bison known for its burgers, ribs and fried chicken.

A short walk in the other direction is Lionshead Village with its Gondola to the top of the mountain, said Dana Le, as we watch the parade pass by–kids who are drummers, cheerleaders, gymnasts, hockey players—even a “precision lawn chair demonstration.” There are puppies being trained to be companions for those with challenges, firemen,  kids in self designed tee shirts from the Alpine Arts Center and   the local Bookmobile in a decorated school bus. Kids who are veterans of this parade have brought bags for the candy and sunglasses being tossed from the marchers.

“Everything is so easy,” added Lindsay Morgan, here with four kids. After the parade, they headed to the Four Seasons pool and the BBQ buffet with everything from chicken, lamb, brisket and a whole suckling pig with sides (think fruit, cornbread, corn on the cob, grilled veggies and three bean salad). There were also burgers, veggie burgers, hot dogs and, the best part—make your own ice-cream sundaes and milk shakes ($35 may seem pricey for the adults but you can’t buy the convenience of eating while the kids are playing in the pool!).

“We’ve stayed a lot of places in Vail,” said Kelli Martin, back with her husband and two kids, adding that they are such fans of the Four Seasons that they convinced friends to join them this year.

“This is the best,” she said, digging into her veggie burger.

During the afternoon, there is a free “Patriotic Concert” at the Gerald R. Ford Amphitheater, also a short walk from the Four Seasons and Vail Village. The Dallas Symphony orchestra played scores from World War II movies along with a host of John Philip Sousa numbers.

What to kids think is the best part of their stay?

“Everything! said Kate Le,7, here with her family from Dallas.

It doesn’t get better than that!