Family gatherings at Gettysburg for 150th anniversary of Lincoln’s address 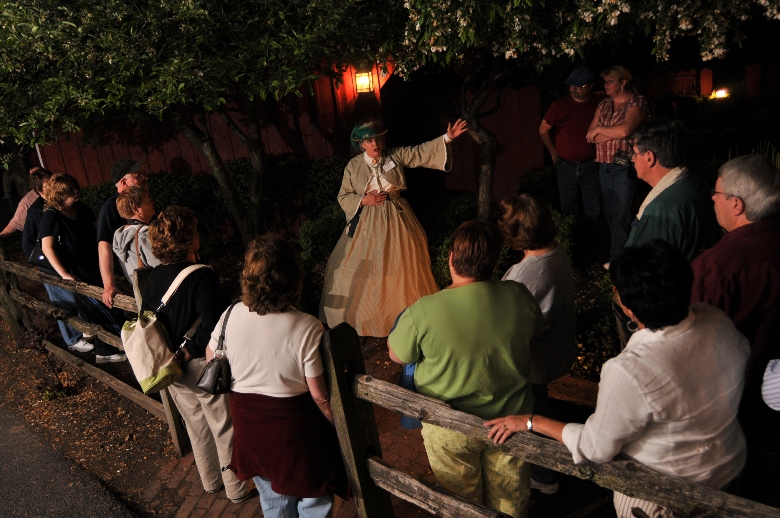 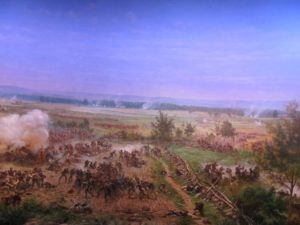 President Lincoln spoke for only two minutes Nov. 19, 1863 when he delivered those 272 words — The Gettysburg Address.

At the time, no one expected the speech to be a big deal. Lincoln had merely been asked to make a few remarks at the dedication of the Soldiers’ National Cemetery in Gettysburg, here in the Pennsylvania countryside, just four months after the searing battle that turned the tide of the Civil War and left 51,000 soldiers dead, wounded and missing. He didn’t write the speech on the back of an envelope, as many believe, but he did revise it at the Gettysburg home where he stayed.

“The world will little note, nor long remember what we say here, but it can never forget what they did here. It is for the living, rather, to be dedicated here to the unfinished work which they who fought here have thus far so nobly advanced … that we here highly resolve that these dead shall not have died in vain — that this nation, under God, shall have a new birth of freedom — and that government of the people, by the people, for the people, shall not perish from the earth.”

Gives you goose bumps, doesn’t it? That short speech — the 150th anniversary being celebrated with much fanfare this month — is not only considered one of the best speeches in the history of this country but it also transformed Gettysburg from a scene of merciless carnage to a place that gave meaning to the sacrifice of the dead — and gives meaning to all those who visit today, some 1.5 million people a year.

Gettysburg will commemorate the cemetery dedication with candidates taking the Oath of Citizenship. Also, on Saturday, Nov. 23, there will be a Remembrance Day celebration with a service and parade and that night, luminary candles will light the graves of each Civil War soldier.

When the armies limped away from Gettysburg after that epic three-day battle in the beginning of July 1863, the community was in shambles with wounded men in every available building and the dead in hastily dug graves. Land was purchased to create a proper burial ground for the Union dead (the Confederate dead were dug up years later and reburied in the South).

Today — and now that the government shutdown is over — you can walk the battlefields, past some 1,500 monuments that Civil War veterans erected where soldiers once stood and fought — regiments from New York and Maine, Pennsylvania and Massachusetts.

We learned that there were 64 medals of honor won in Gettysburg and only one civilian casualty — a young woman named Jennie Wade, who was inadvertently shot by a stray bullet in her sister’s kitchen. Did you know that Civil War soldiers were twice as likely to die of illness then they were to die on the battlefield?

“As the tour guide spoke, I stood there imagining the intensity and activity that took place on that battlefield. … It felt like I was there during the battle,” said 15-year-old Christopher, one of a group of inner-city high school boys I recently took to visit Gettysburg. They attend our local high school under the auspices of A Better Chance and aren’t that much younger than some the soldiers who died at Gettysburg.

The boys especially like the Visitor Center, owned and operated by the Gettysburg Foundation with its first-rate museum chronicling the battle and the men who fought here and the famous Cyclorama circular painting depicting the battle.

Hundreds of cycloramas were painted and exhibited during the 1800s, using lighting effects and a narrated script. French artist Paul Philippoteaux completed the Battle of Gettysburg in 1884. It is 377 feet around and 42 feet high, longer than a football field and as tall as a four-story building.

Even 21st-century tech-savvy kids were mesmerized watching the painting seem to come to life as they heard the story of Pickett’s Charge, when the Confederate troops attacked Union forces on Cemetery Ridge in what was one of the bloodiest battles of the Civil War.

I was impressed with the museum’s artifacts, which include everything from drums, cards and harmonicas the soldiers carried to haversacks. There is also a comparison of officer and enlisted men’s sleeping quarters. Much better to be an officer, the boys agreed, with baggage carried in a wagon and a cot to sleep on. We also learned about Clara Barton, who nursed the soldiers and, of course, went on to co-found the American Red Cross in 1881.

The Blue and Gray Bar and Grill, where we stopped for burgers, served them up with Confederate and Union Flags, each one named for a famous general in the battle. 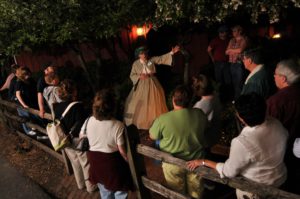 We were all surprised by how much there was to do in Gettysburg beyond the battlefields — bike tours, farms to visit (Fields of Adventure has a giant corn maze and campfire program); go-carting at the Gettysburg Family Amusement Complex right next to our hotel, The Aspire Gettysburg Hotel, and even ghost tours.

“That was my favorite part,” said Luis, a high school junior. We were guided by “the ghost of a Confederate soldier” to the home where 20-year-old Jennie Wade died from a stray bullet.

The ghost lamented that all these years, he’s been blamed for the shot that killed Jennie and ever since, there have been ghostly happenings in and around the house in downtown Gettysburg — floating lamps that shatter, footsteps, Confederate soldiers seen outside on the grounds. We didn’t see any of that, but we were thoroughly entertained by “Johnny Reb” from Ghostly Images. “How do they know it was my bullet?” he thundered.

We saw the bullet holes — the bullet that killed her went through two doors — and sat in the dark basement where her family hid with her body for 36 hours, until it was safe to leave.

But mostly, we thought about all the young soldiers on both sides who were lost to war.

Our group of kids was comprised of African American and Hispanic students, many first generation Americans, who remarked soberly, that they were here because of the sacrifices of those soldiers long ago. As President Lincoln vowed, they have not died in vain.