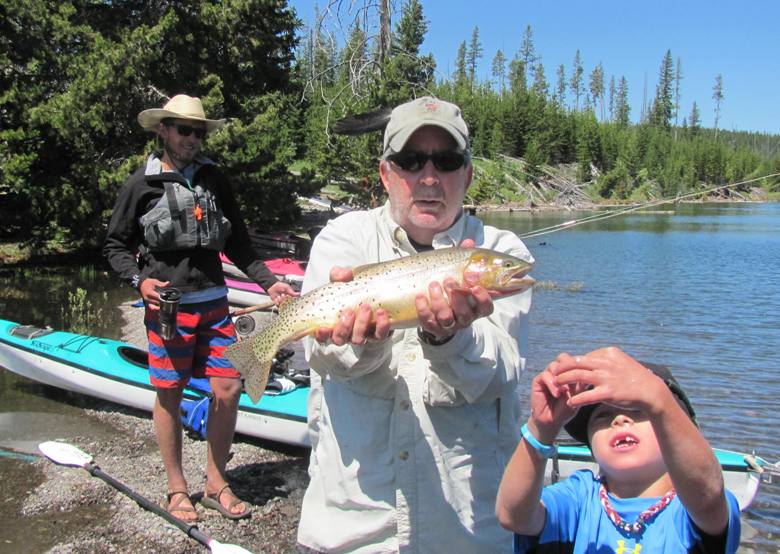 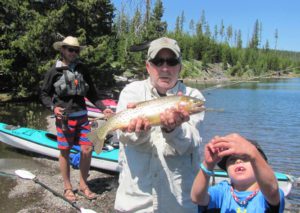 DAY 4 – Ethan and Hannah are leading the way.

The best part of the day: “I caught a frog,” nine-year-old Ethan said, adding he named him Freddie Frog.

We were camping in a wilderness site on Yellowstone Lake in Yellowstone National Park and had spent the morning kayaking, stopping in a meadow full of wildflowers to fish, fly a kite and catch frogs.

The wildflowers were gorgeous– purple (lupine), blue (columbine), yellow (buttercups), red (Indian Paint Brush) and white (Elk Thistle. And the kite was certainly fun, brought along by our intrepid Austin Lehman Adventure guides Matty Kirkland and Katie Gugliotta, who also brought a football to toss and gave Ethan and six-year-old Hannah some lessons in rock-skipping.

But the best part, Ethan said, was the frog, caught in estuary. “Looking at Freddie Frog was the most fun,” his six-year-old sister Hannah agreed.

Ethan wasn’t the only one who had a fun morning. My husband Andy, a novice fly fisherman, was just practicing casting when he caught a 22-inch cutthroat trout. We couldn’t keep him—in Yellowstone they have to be released– but Andy had him long enough for the picture.

There was no one on the huge lake but us and a huge Bald Eagle Ethan named what else—Ethan. He named the Osprey Oscar Osprey, Andy’s trout Tommy, the Canadian Geese Cameron and the Loon Lucy.

The paddle was “hard and fun.” The kids declared.  “The hardest part was just getting the rhythm.”

Though millions visit Yellowstone each year, we’re about as far from the crowds you can get. Here, a motorized boat may go no more than 5 mph, contributing to the wilderness ambiance.

Hannah loved when Matty rocked their kayak, “Kind of scary but fun,” she declared, adding, we paddled, “a little too long and I got tired.,”

No TV, No electricity, or AC. No showers or even hot water. We climb over logs to get to the outdoor privy—crazy!  Declares Ethan– and sleep on simple cots in tents. Our food is strung up high in case of bears (which don’t make an appearance, thankfully.  The mosquitoes are fierce but we’re all having a blast, especially the kids.  Everything here is new and exciting. They’d never kayaked or flew a kite in a wildflower-covered meadow so far from civilization. They helped drive the boat that got us to the point on the lake where we began our paddle to the campsite.  We even learn a little geology. The epicenter of the caldera—the Yellowstone Volcano—is in the middle of this huge lake 300 feet deep. There is a lot of geothermal activity deep under the water, we learn.

Despite 40-degree water, they are in inner tubes with snorkel masks to look at the fish, jumping out to stand by the fire.  On a nature walk, they peer through mini magnifying glasses at bugs and flowers and wild strawberry.  “We saw a chipmunk. We found Alvin!” Hannah says.

When camping with kids, “It’s all about the entertainment,” said our veteran guide Matty Kirkland.  Being prepared with games, stories and songs certainly helps.  Take time to appreciate the smaller things-flowers, bugs, the sounds of the water, he urges. “Totally look at it from the kids perspective,” he says.

Even getting to the outdoor potty is an adventure.  The kids take their stuffed moosees (a gift from Austin Lehman Adventures—and photograph them everywhere, from the potty to the kayaks and tents. The small things—like the fact that the fixings for smores got left behind—seem inconsequential.

It’s gratifying to see 21st Century kids cope so well outside their comfort zone without the electronics that they never seem to be without.

As I’m writing this, the kids are making balloon creatures—dogs, flower, dinos, party hats—to hide for the grownups to find.

Next: Eagle, Osprey… and bears!