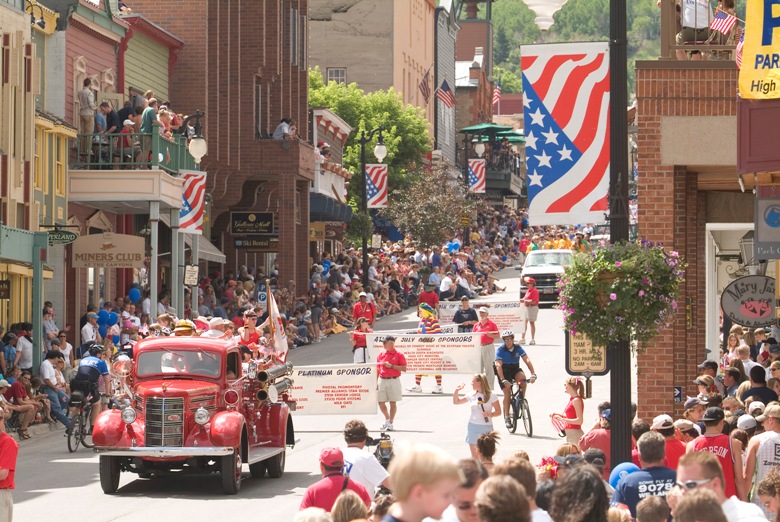 Sometimes, the anticipation before a big holiday is the most fun.

It was for us as we’d get ready to celebrate July 4th, in Evanston, Ill. The day before the big parade, we’d go with the kids to stake out our spot, leaving lawn chairs behind. We’d decorate their bikes if they were marching in the parade — with soccer, little league or scouts — and bring flags to wave and plenty of water.

It didn’t matter that it was hot. There was always ice cream to cool us off.

Wherever you are you this year, you have a chance to create a new family tradition while celebrating the nation’s birthday — whether running in a race (how about a midnight race three miles up and three miles down a mountain in Seward, Alaska), indulging in a pancake breakfast, checking out a local arts festival and, of course, watching fireworks. (Yes, there were years when the kids were scared, but we went anyway, sometimes leaving early.)

Have your kids ever entered a watermelon rolling contest? They can as part of the festivities in Southport, N.C., part of the North Carolina Brunswick Islands. Line up at the popular dunking booth in Stowe, Vt., or march along with the fife and drums at Colonial Williamsburg where you might bump into Thomas Jefferson.

Here’s your chance to see the fireworks in the Fireworks Capital of America — New Castle, Pa., where Zambelli Fireworks Internationale and Pyrotecnico got their start in the mid-1800s. This region was once the largest producer of fireworks in the world and today, the festival in downtown New Castle promises a terrific display, along with music, entertainment and more.

Join the pie eating contest in Park City, Utah or watch the lobster races in Bar Harbor Me., where you can chow down at a seafood festival.

You might meet up with Teddy Roosevelt’s Rough Riders at Sagamore Hill in Oyster Bay Long Island () where the free Fourth of July celebration also includes a visit and speech from Theodore Roosevelt.

Abe Lincoln and Uncle Sam will be on hand in Denver at the Four Mile Historic Park’s Old-Fashioned Fourth of July Celebration.

It’s not too late for a last-minute, early July getaway either. Find lots of ideas in our special “51 Great Ideas for Your Family’s Summer Vacation.”

A lot of July 4th festivities last a lot longer than just one day too. Here are seven that are guaranteed to please:

2. You’ve got an entire week to celebrate at the 31st Annual Boston Harborfest, the celebration of Boston’s colonial and maritime heritage. This year, Harborfest honors the Bicentennial of the War of 1812 with the USS Constitution and a Parade of Ships Saturday, June 30. Here’s your chance to have a scavenger hunt where the Boston Tea Party began (www.osmh.org) or hear the reading of the Declaration of Independence from the balcony of the Old State House, as it was read on July 18, 1776 (www.july4th.org).

4. The 93rd Annual Cody, Wyo., Stampede starts June 30 with some of the world’s top bull riders competing. It also offers a street dance, arts and crafts festival and the July 4th Stampede Parade. Cody, of course, is considered a gateway to Yellowstone National Park.

6. Head to the nation’s capitol where, in addition to the fireworks and parade, the Smithsonian Folk Life Festival promises to draw more than a million people June 27 to July 1 and July 4 to 8 to the National Mall to watch exhibits and performances highlighting grassroots culture entitled “Campus and Community, Citified, and Creativity and Crisis.” Attend a “mini-university” class on astronomy, paleontology, sustainable energy, and many other topics or try a wide variety of 4-H family activities, from gardening with heirloom seeds to robotics competitions. See how African-American residents living east of the Anacostia River maintain their Southern heritage.

Got those American flags ready?