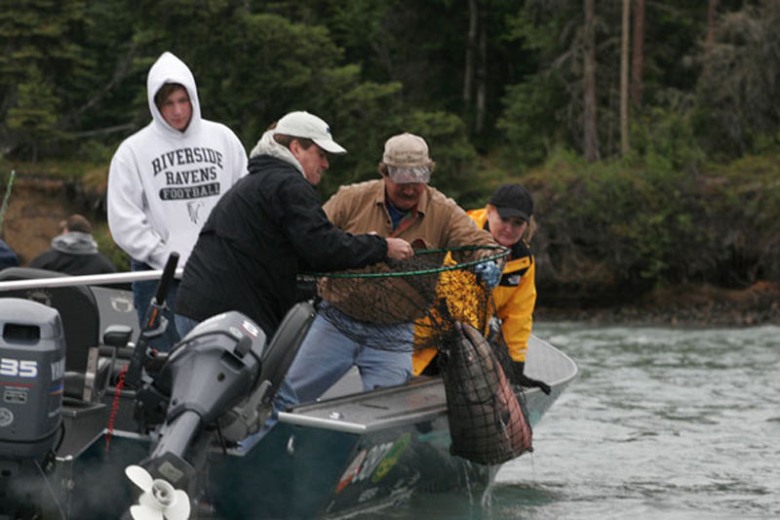 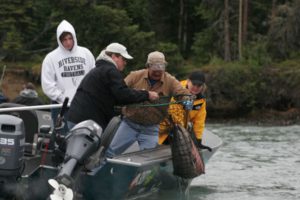 Reeling in a big one on the Kenai River.

“The fish must hate us,” moans 13-year-old Miles Singer.

We are on the world-famous Kenai River in Alaska with one of the river’s best guides, Steve Fickes, who jokes that he’s been guiding “ever since I got my accounting degree” — more than two decades ago.It’s like Grand Central Station on the Kenai this morning — about 50 small boats within a quarter-mile stretch on the river hoping to catch one of the 50-pound King Salmon making their run up the river to spawn before dying.

His choice — I knew he’d be safe where we’re staying — at the simple Great Alaska Lodge (www.greatalaska.com ) right on the Kenai River. The lodge attracts serious “fishers,” as well as families seeking an alternative to seeing Alaska by cruise ship, and offers the opportunity to fish, kayak, hike and nature walk along the spectacular Kenai Peninsula.

“We thought a cruise would be boring,” the kids said. “This has been the coolest trip ever,” added Mary Ann Quigley, visiting from Florida with four kids 14 to 24. Some budget-minded families opt for the adjacent tent camp — complete with hot water showers, camp cots, fluffy towels and cooks. “Great Bonding,” said Californian Becky Roth, traveling with her husband and grown kids on their first family trip in 11 years. They were hiking, fishing, kayaking all together. Had they opted for a cruise, she said, “We’d all be going our separate ways.”

The Kenai, meanwhile, is chock-a-block with boats, some reeling in Kings, others (like ours) looking on enviously. The guides confer by cell phone to find the best fishing “holes” where the salmon stop to rest on their way upstream. We find plenty of these holes — Mud Island, Eagle Rock, Poacher’s Cove, Old Faithful — staked out by plenty of boats — but the salmon elude us. We get four bites (I get three!) but we don’t catch any fish.

“It’s about patience,” says Steve Fickes, one of the best guides on the river. But that doesn’t lessen our frustration. We munch on granola bars and sandwiches we made at breakfast. The sun peeks out from behind the clouds. We peel off windbreakers and fleece jackets. But no fish. Fickes tells us the second and largest run of salmon has started on the river — more than 50,000 sockeye salmon in one day and more than 1,000 of the King Salmon prized for their size.

We see one jump to the side of the boat; another jumps in front, but they avoid our hooks and lures. So frustrating!

Miles Singer, meanwhile, is already thinking about how much money he can make from selling the sockeye salmon he has already caught from the beach at the lodge. I think back to my kids’ excitement when they first fished for “keepers” on Minnesota’s Lake Vermillion at Ludlow’s Island Resort (www.ludlowsresort.com ). The key to their interest, whether they’re three or 13, of course, is the catch. But that doesn’t deter anyone from trying — or bringing kids along. Roughly 34,000 visitors to Alaska — one in five — go fishing every summer, Alaska tourism officials report.

Alaska fishing resorts — here and elsewhere — are finding more families seeking them out and welcome their business. The Waterfall Resort in Ketchikan (www.waterfallresort.com ), for example, has designated the week of July 4th for families. (Kids can stay and fish for half price.) We fished in Glacier Bay from the deck of the Sea Wolf, a small, reconstituted World War II minesweeper we called home during a kayak trip, courtesy of a Thompson Family Adventures (www.familyadventures.com ).

On our boat, I’m getting a little cranky. How long until we catch the Big One? “Kings can be temperamental,” says Fickes. “Sometime they bite, sometimes they don’t. The hours of boredom are worth it for the payoff,” he promises.

That doesn’t make us feel any better, as we try to keep warm in the damp morning air.

We make our way up and down the lake — 20 miles in nine hours — but no luck. Steve Fickes explains that we are approaching the best of the salmon run, which people come from all over the world to fish every late July and early August. This just makes us feel worse.

Miles focuses on the two sockeyes (almost 10 pounds of meat) he has already caught. (They will cost $150 to ship home.) I keep thinking about how amazed my gang will be if I reel in a 50-pound king salmon.

But it is not to be. While others take pictures of their trophy fish, we wonder why we’re having such rotten luck.

Fishermen are only allowed to reel in one King Salmon, our guide explains. At this point, we’d settle for one for the boat. A bald eagle passes overhead. Seabirds munch on salmon carcasses thrown back in the water by fishermen after they’ve cleaned their catch. Our guide confers some more via cell phone with his fellow guides.

Three bites, nine hours on the world-famous lower Kenai River, and no fish later we call it a day. We can’t help but be disappointed when we return empty-handed. Why couldn’t the salmon choose another day to be temperamental?