Five days in Anguilla on a best girlfriends getaway 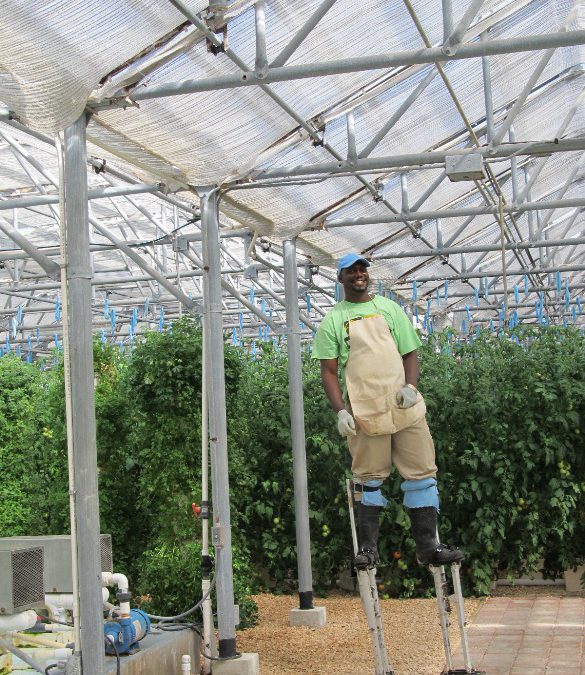 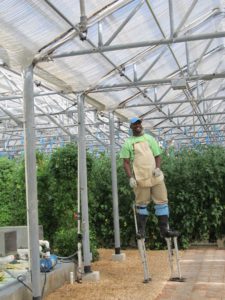 Farming on stilts in the hydroponic garden at CuisinArt Resort Anguilla

DAY ONE:  Help yourself.

To a bright red cherry tomato.   On the vine.   Maybe you’d prefer a cucumber or a yellow pepper.   Or some parsley.

No we’re not at a farmer’s market or a market.  We’re at a luxe Caribbean resort—CuisinArt Resort in Anguilla, a tiny island just a few miles from St Maarten (the whole island is just 16 miles long and three and a half miles wide) that is famous for its 18,000 square foot hydroponic farm that grows 75 per cent of the veggies this resort uses—they harvest more than 60 pounds of tomatoes every day!

In case you are wondering, this resort is owned by Leandro Rizzuto, the American financier who owns ConAir Corporation, of which the CuisinArt company is a part.   Years ago, he wanted to build a house here but was told the land was zoned for a hotel.  No problem — he built a Greek-inspired hotel (all white and blue) with 102 rooms and villas.

We’re here on a girlfriends’ getaway ensconced in a huge three-bedroom villa with its own pool, kitchen, and beach.  I’m sitting aside the pool and hear the crashing waves as I write this.   Did I mention the 2-mile-long beach?

But locals are quick to tell you Anguilla isn’t only about the beaches.   “We’re about hospitality and good food,” says Dave Fleming, who was our waiter at Smokey’s Cove, a local restaurant on the beach where we feasted on just-caught tuna, ribs, and goat curry, a local specialty.

“Anguillans are very friendly and the food is all fresh.”

That’s certainly true at CuisinArt where we take a tour of the gardens and the hydroponic farm in the greenhouse.  Owner Leandro Rizzuto was inspired in the early 1990’s, after visiting Disney World’s Epcot, to build this state of the art food production facility here, helped by experts from the College of Agriculture at the University of Arizona who were known for their expertise in hydroponic farming. 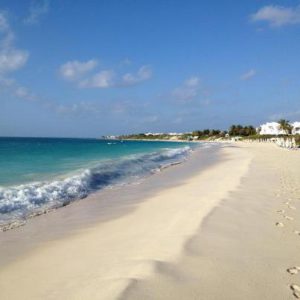 The mile long beach at the CuisinArt Anguilla

The CuisinArt Resort & Spa has over 35,000 plants representing over 150 species.  Want a coconut?  There are more than 8 kinds of coconut trees.  Brian Corbett, who oversees the gardens, obligingly opens one for us and encourages us to “put our mouths over the hole” and drink the nutritious coconut water.  Coconuts, he says, are used in spa treatments and beach bar drinks as well as by the chefs for the resort restaurants—there are five of them.

Back to the hydroponic farm which draws guest and locals.  “This is my third tour, and I learn something every time,” said Jim Sottile.   With over 1,000 school children visiting in the last year, it’s a wonderful place for visiting kids to learn the concept of farm-to-table where they can pick a tomato, a pepper, or an eggplant right off the vine.

Hydroponic means “water working” with plant nutrients added for the plants to grow.  The Aztecs had floating hydroponic farms.  Other ancient cultures had hanging crops.

Hydroponics were used during World War II to grow fresh vegetables on islands where troops were stationed.  Today, principal crops grown are tomatoes, cucumbers, peppers, and lettuce.  Here, on Anguilla, where all fruits and vegetables must be imported, quality is reduced by shipping.  The greenhouse is designed to withstand winds up to 110 mph caused by hurricanes.  The tomatoes and peppers ripen on their vines for maximum nutritional value and taste and are used in everything from pasta to salad.  The resort grows all its own herbs—chives, garlic, rosemary, thyme, parsley, basil, and oregano—some of which are used in spa treatments.  Did I mention the mint and lavender—all grown in baskets that reach almost to the roof?  Impressive!   Some of the tomato plants grow 40 feet high!  From seeds to harvest is just 44 days!

At the separate organic gardens, we see lemongrass and the noony tree, the fruit of which is good for whatever ails you, whether cramps or high blood pressure.  There are avocados, grapefruit, tamarind, guava and soursop and sugar apple.  But nothing is as impressive as the 10-foot tall vines of tomatoes, the lush red, green, and yellow peppers, the cucumbers, and the varieties of lettuce—arugula, red and green.

“We harvest lettuce everyday,” said Rohan Maynard, one of the five full-time employees who oversee the greenhouse.

Brian said he’s also working with local kids at the island’s famous tennis academy to teach them that gardens aren’t something that other people do.  “No other resort has gardens like we do,” Brian Corbett said proudly.

But Dr. Howard Resh, the horticulturist who founded the hydroponic greenhouse here as well as overseeing other hydroponic projects elsewhere—laments that if kids aren’t really interested in science, they aren’t interested in visiting and learning.  “They would rather play video games or go to the beach,” he says.  “The biggest problem is the lack of interest in science…but they certainly need to be made aware that food doesn’t come from the supermarket!  They need to know how much it costs to grow food that goes to the supermarket and that all vegetables don’t have to be perfect…that’s not real!  He shows me a beautiful tomato on the vine that would be rejected because it is too small; another because it is an odd shape.

With the island’s only golf course, the resort is over 400 acres—the most land of any resort on Anguilla.

I like the vibe here—quiet, over 100 restaurants on the island.  This resort boasts plenty of water toys (included in the rate) as well as the only golf course on island.  When kids are here—and during school break times, 75 per cent, more than half the guests ,70 per cent who are returning are with families—there are plenty of sand toys and kids’ dinners supervised at no extra charge, beach volleyball and ore  (?) Can cooking with the chef be next? There are already cooking classes.

“It is so relaxed here,” says Kerin Lake, who works as a bellman at the resort.

“The island people aren’t afraid to come to your aid,” said Brian Corbett.

“We all look out for each other,” said Chris Richardson, the resort’s acting manager.