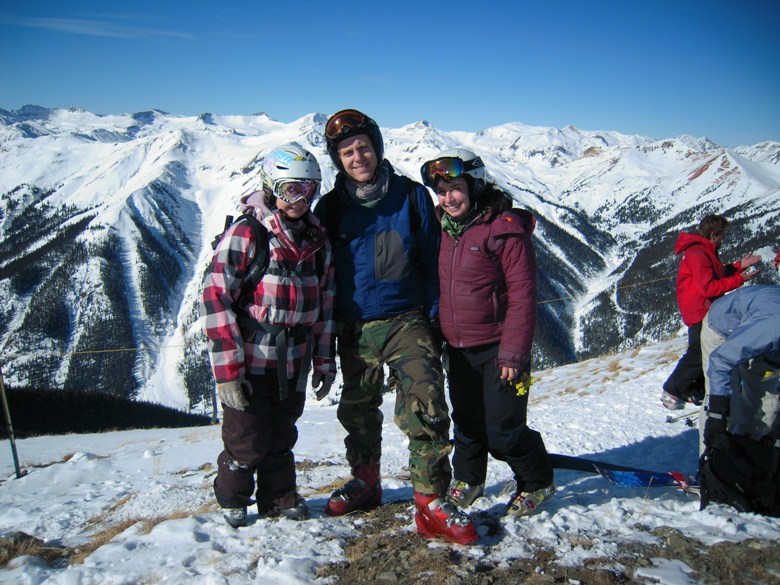 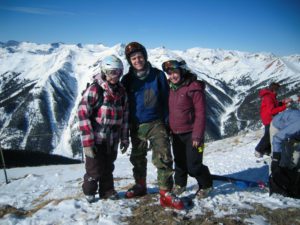 “It’s a lot of hard work and a lot of fun and you just have to learn to roll with the punches when there is an obstacle in your path,” says Aaron Brill, the 38-year-old owner and founder, with his 37 year-old wife Jenny, of Silverton Mountain Resort in Colorado  (www.silverton.com)  that  is celebrating its 10th  anniversary this year.

This isn’t any ski resort.  For one thing, there is only one lift and no bathrooms–just an outhouse.  Apres ski means a beer or a coke in the chilly tent that serves as a base lodge.  It’s heated by a wood stove. Only expert skiers need come and be prepared to work for your turns. You might have to hike 45 minutes—uphill in 10,000 foot-plus elevation. The payoff is skiing down.  Did I mention you need a shovel and avalanche probe?

But what an experience!   More than 400 inches of snow a year, heart stopping views in every direction and affordability too–$100 for a full day with a guide on a mountain with less than 100 people. Compare that with a lift ticket at Vail and skiing with thousands.   You can even heli-ski here—at $159 a trip—a whole day is at least a third less than any other resort.

“It’s scenery equal to other famous resorts like Telluride with Branson Missouri prices,” says Michael  Constantine, who owns the  nine room B&B Inn of the Rockies (www.innoftherockies.com), where we stayed, enjoying probably the best B&B breakfast I’ve ever had (quiche with seven vegetables and five  kinds of cheese!)  “The mountain is one of a kind,” says Constantine, who has served as a ski patroller there.  “It has more snow and less people than any mountain in North America.” “We have as many skiers in a year as Vail has in one day” says Jenny Brill.

In fact, last season, Shaun White’s sponsors built him a Olympics sized superpipe at 12,000 feet where he could practice new tricks for the upcoming Olympics.

“It is super deep and super steep and a better scene than the resorts. It is totally different,” said Darin Ramirez, a 28 year old engineer from Denver warming up in front of the wood stove.  “If you want a vacation where you are chilling out, go to Vail,” Jokes Susie Kim, a cardiologist from Denver who logs plenty of time snowboarding at Vail Mountain.  “Here you work for it.”

You just wouldn’t want to be sitting on a couch for six months and then come here,” jokes his friend  Theron Hreno, who is  from Boulder.

But the challenge is a big part of the allure, says long time Silverton guide Kim Grant. “You push yourselves a little more than you might at Telluride or another resort,” says Grant. “They might be a little frightened at the beginning but by the end of the day, they are so amazed to see what they’ve accomplished.”

“The people here are skiers. It is about the snow and the terrain—a special place,” says Jim Orofino, a 72 year old retired engineer from Florida. “People don’t come here for shopping or nightlife.”

That’s an understatement. There are only a handful of restaurants in town and they close by 8:30 p.m. But such nice people  This is the kind of town where the owner of the Gear Exchange—the only ski and snowboard shop in town, Roger Wrublik, opens up for us after we arrive so my daughter’s boyfriend can rent some boots in time to be at Silverton Mountain early the next morning.  “No problem,” he tells us.  This is also a town where a young family produces both rum in a distillery and sleds that LL bean sells.

“Kids won’t run off here. They will hang with you and you will be making memories for ever,” says Jenny Brill.  “I feel  lucky to live here the sense of community is very strong,” agrees Megan Kimmel, who owns Café Mobius, the coffee shop on Silverton’s main street.  “As soon as I came here I knew this is where I wanted to be.”

Lucky girl! Incidentally, there is also Kendall Mountain–very small and very cheap– $10 lift tickets that is ideal for young kids or adults who just are learning and want to have some fun in the snow.

My knee has kept me off the steeps and deeps but my two daughters, Reg and Mel, and Reg’s boyfriend  Dan Foldes, headed out  at 8:30 a.m. and didn’t stop until they quit at 3:30 p.m.  Lunch was a sandwich waiting for them  preordered when they come in tired but all smiles.  I can’t imagine a better place for an adventure–loving parent who is an expert to bring a teen or tween for a memorable experience on snow.

Younger kids are welcome too–Jenny Brill is  a new mom herself. In fact, she has the only infant in the entire town of Silverton. She says kids as young as six have skied here.

In the beginning, Jenny Brill said, their families thought they were nuts—to build their own ski resort…from scratch! “They thought we’d be home soon! Now they are super proud. We showed them!” Not that it was easy. They did a lot of the manual labor themselves, even digging the posts for the lift. There were a lot of nights when Jenny Brill said she went to bed crying wondering how they’d make it.    “Five of the last 10 years were “brutal”   It seemed like something “traumatic”  “Now we’re making a living,” she said happily.“

The Brills met as college students in California—Aaron from Berkeley Jenny from suburban New York. Aaron always wanted to own and run his own resort and they spent their 20s working around ski country finding the perfect place—undeveloped, lots of snow and private property for sale.

That led them to Silverton, a tiny struggling town (just 500 people).  B&B owner Constantine says he thinks Silverton is weathering the recession because “people have always struggled here.”

Jenny Brill notes that powder hounds who head to areas like Alta, Snowbird, Squaw Valley or Jackson get frustrated because the areas get skied out too quickly. Skiers and riders spend as much time waiting on lift lines as they do on the mountain. But simply heading into the back country can be dangerous- deaths and injuries every year attest to that.

Silverton Mountain provides lift accessed skiing and is only open four days a week. It is designed to have a minimal environmental impact (no plans for condos or high speed lifts ). Indeed, it’s how skiing used to be. Imagine Aspen in the  1960s and Telluride in the ‘70s, suggests Constantine.   Imagine an experience where you can access more than 1,800 acres of pristine back country via chairlift and without a crowd.

Just don’t expect groomed runs or places for a fancy lunch or even a bathroom.  Expect “magic” says Clifton Yen, who came all the way from New York for two days here. “It has a lot of heart, and no attitude,” he said.

That was Aaron and Jenny Brill’s dream from the beginning. Aaron runs the operations side of the business—the helicopters, the lifts, the avalanche patrol.  Jenny handles marketing the HR. “Other places have 10 different positions for we each are filling,” she says –all the tougher since the arrival of son Colt four months ago. And they haven’t hired a nanny yet!

It is amazing that you go out with one set of expectations and when it doesn’t work out that way, you go around the obstacles in front of you…that’s life!