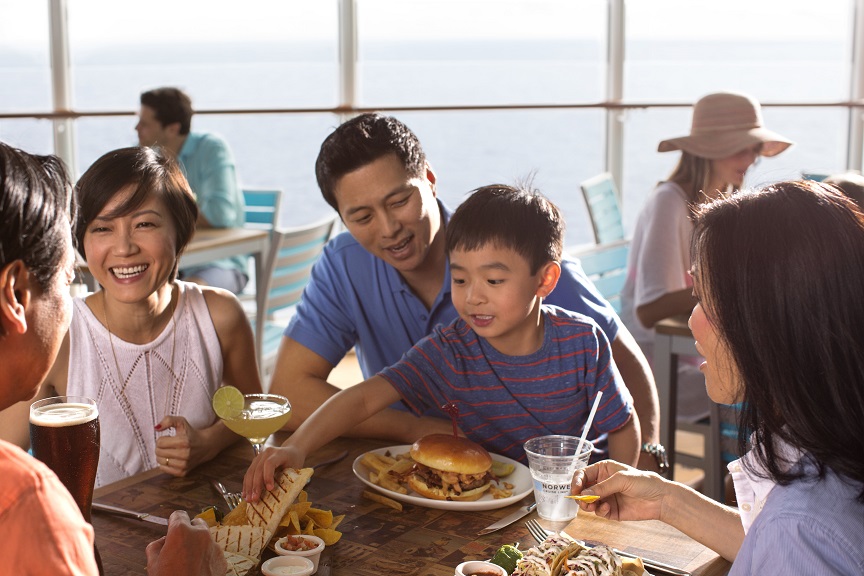 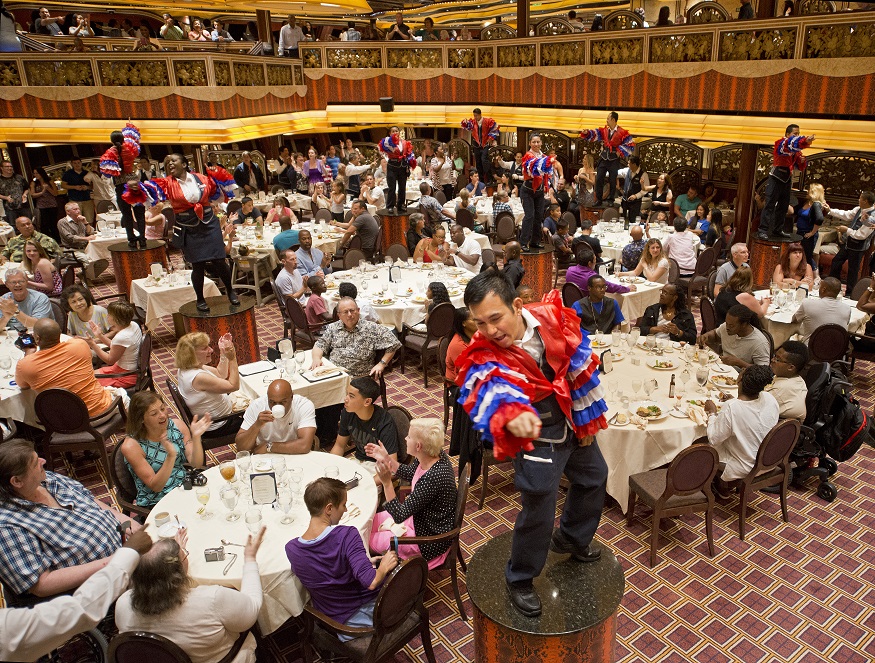 Waiters dance for guests as part of post-dinner entertainment aboard the Carnival Freedom, which operates year-round four- to seven-day cruises from Galveston

That’s what everyone asks you in New Mexico restaurants. Translation: Do you want New Mexico’s famous red or green chiles?

The story goes that a waitress at Tia Sophia’s, the popular breakfast and lunch place on Santa Fe’s Plaza, got tired of the question, so she’d just ask people if they wanted both — Christmas!

Now that term is widely used all over New Mexico, but Tia Sophia owner, Nick Maryol, who took the popular eatery over from his dad, swears the story is true.

Tia Sophia has another claim to fame — besides excellent, well-priced Mexican food. It’s said to be the first place a breakfast burrito was ever put on a menu in New Mexico. Now, there are so many varieties of breakfast burritos that there is a state-sanctioned Breakfast Burrito Byway celebrating its popularity.

Maryol’s dad, Jim, first put it on the menu in the 1970s — a breakfast burrito is typically bacon, potato, cheese all wrapped in a tortilla and smothered with red or green chiles. (Today, you can have it with ham, sausage or bologna, too.)

“It’s still the most popular breakfast,” Maryol says — and a bargain at under $10.

Certainly you can eat well in New Mexico no matter what your budget — like the 1,000-seat El Pinto Restaurant and Salsa Company, spread out over 12 acres in Albuquerque. The company, run by twin brothers, grows its own chiles, keeps its own chickens and produces 4,000 cases of salsa and green chile sauce a day.

You can teach the kids a lot about the culture of a place through its food. Besides, it’s fun. Two-thirds of those polled for the 2016 Portrait of American Travelers say fine-dining is important on vacation. Food is especially important for millennial families. Seventy-seven percent of those polled said experiencing new cuisines was a motivation for vacation, MMGY Global’s Steve Cohen told the attendees at the TMS Family Travel Summit I co-chair.

Chefs and hoteliers report that often kids are the biggest foodies in the family and turn up their noses at traditional kids’ menus, once they are past kindergarten. “The families I see today have a whole different take on food,” said celebrity chef and hotelier Charlie Palmer, the father of four sons. “They are concerned about the quality of the food they are eating.”

To that end, it’s up to all of us to help restaurants and hotels up their game when it comes to food for kids. If you think the kids’ menu is too limited, ask to order a half portion at half price or an appetizer portion. If the waiter balks, ask to speak to a manager.

Award-winning San Francisco chef Traci Des Jardins wishes American restaurants would take a page — a menu page — from their counterparts in other parts of the world.

“The United States is one of the only places in the world that has special meals for kids,” she said. “We are conditioned to teach kids to eat differently than we do and that is a mistake.” This is especially true when kids’ menus are not only pedestrian, but unhealthy, serving up processed, fat-laden dishes like macaroni and cheese and chicken fingers.

Here are five ways to up your food game — and encourage picky eaters to try new foods on your next 2017 trip:

CONSIDER A CRUISE. Families tell me cruises offer the chance for kids to try all kinds of new foods, because if they don’t like something, they can simply order something else. And at the bountiful buffets you can encourage them to sample something beyond pizza or a burger and fries (a curry, for example). According to the 2016 Portrait of the American Traveler, the vast majority of those polled who vacationed with kids — 88 percent — said food available onboard was influential in their cruise line selection. Just be mindful of the upcharges for specialty restaurants aboard ship. (Check to see if kids can go free, as those staying in Carnival Vista’s Family Harbor can, or at a reduced price.)

VISIT A FARMER’S MARKET where you can chat with local farmers about what they grow and taste varieties of fruits and vegetables different from home. One of my favorites is the Ferry Plaza Farmers Market in San Francisco; Barcelona’s La Boqueria Food Market also shouldn’t be missed. The Original Farmers Market at Third and Fairfax in Los Angeles has been its city’s most extraordinary landmark since 1934 when 18 pick-up trucks drove onto a large vacant lot to offer fresh fruits and vegetables to families in the growing community. Let the kids help choose picnic fixings.

TAKE A FOOD TOUR and learn about local culture through food. Most recently, I took a food tour in Athens with Context Travel, which offers themed walking tours all over the world. Another particularly good one was the “eating history” tour in London’s East End with EatingLondonTours.co.uk. Another option: Designate food as your interest when you sign up for a complimentary tour led by a local through the Global Greeter Network, which operates in cities around the world. How about desserts, if you are in NYC with Sugartooth Tours.

SIGN ON FOR A FAMILY COOKING CLASS. You’ll find them all around the world, from the Family Funday at Culinary Institute of America at Greystone in Napa Valley to La Cuisine Paris where courses are taught in English.