Follow the Yellow Brick Road to Lincoln Park in Chicago 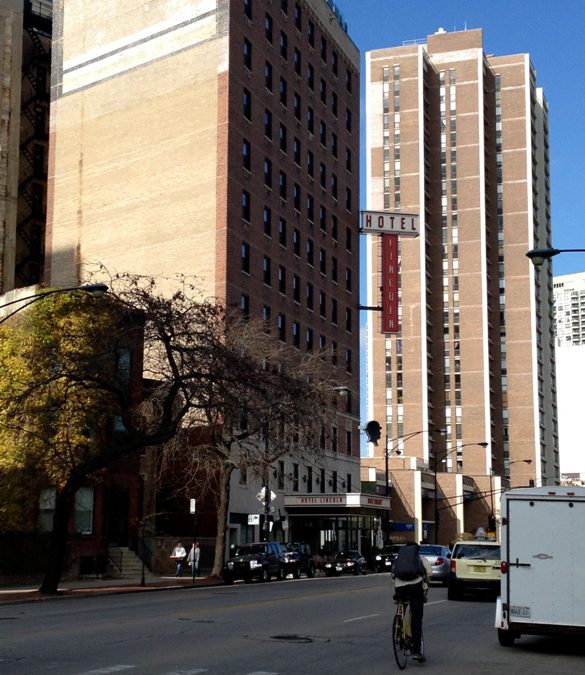 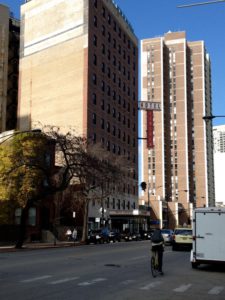 In a city as large as Chicago, it’s comforting to be based in a neighborhood like Lincoln Park, easily accessible to the attractions of downtown but far enough away to avoid the crowds and over-priced tourist traps.  Hotel Lincoln, found on the edge of Chicago’s Lincoln Park is a hotel that establishes a sense of place by bringing the artistic and hipster cultural vibes of the neighborhood into the hotel.  The rooms at Hotel Lincoln feel more like an eclectic aunt’s guestroom, comfortable and unpretentious but adorned with a hodgepodge of art from local artists like the modernist interpretation of President Lincoln that hangs above my bed.

The view of Lake Michigan from my windows changed my perspective of the great lake and forced me to concede in the everlasting debate I had held with my native Chicagoan friends – that the shores of Lake Michigan are worthy of the title “beach.” A trip up the exclusive elevator to the J. Parker rooftop bar and restaurant is worth the ride for an unobstructed 360 degree view of the city from the thirteenth floor.

Creativity flows in the neighborhood of Wizard of Oz’s creator Lyman Frank Baum and prominent greats of various American art movements, so the kid’s rooms at Hotel Lincoln are stocked with art supplies.  This may be the fledgling artists’ chance to be discovered; the best art from visiting kids adorns the walls.  A great spot in the area is Oz Park, where all of the favorite characters of Wizard of Oz are embodied in sculptures found throughout the park.

Forget traditional modes of transportation, grab one of the shiny bikes that look like they have been stored in your grandma’s attic since the 1950’s and cruise around the trails of Lincoln Park.  Not willing to work so hard on vacation? Take the petticab in the summer to the destination of your choice or snuggle up with a hot drink on a carriage ride in the winter. I chose to spend the whole day exploring Lincoln Park by foot, as many of the city’s greatest museums, restaurants, parks and theaters are within walking distance.

The Green City Market pops up on Wednesday and Saturdays across the street and the seasonal veggies inspire many of the dishes (and cocktails) found at Perennial Virant. Chef Paul Virant emphasizes local food to the point that he preserves fresh food at the end of the growing season in jars to use in the winter.  I was especially impressed by the sweet potato pirogies and the pealmeal bacon, which were classic Midwestern yet inventive with their adornments. You’ll know exactly what where your food is coming from, the small farms are spelled out on the menu.

I ventured down North Clark Street to The Chicago History Museum, which boasts the bed where President Lincoln died.  Teens will love the audio tour by local peers as they walk through the interactive exhibits highlighting Chicago’s history of railroads, gangsters, jazz and retail stores.  A magician baffled me at the Magic exhibit by popping popcorn without heat.  He wouldn’t give away his secret, but in the exhibit I discovered Houdini put four swords through a box with a woman in it without spearing her! Be sure to visit the kiosk that allows you to make a customized postcard with your picture to email to friends. No need for stamps!

I meandered through the free Lincoln Park Zoo, where many animals were playful and active despite the cold temperature.  They must be true Chicagoans now!  I quickly arrived at the Peggy Notebart Nature Museum, a great museum for kids to experience some of the wonders of nature by walking through an exhibit where over 1,000 butterflies flutter and through petting the thick fur of a giant stuffed polar bear.  See how younger kids can lead by example in conservation methods to protect our environment by touring the Extreme Green House.  The benches are made out of recycled plastic water bottles!

In the evening, prepare to laugh so hard your stomach literally hurts at a show at Second City, the country’s most renowned improv and comedy theater that once featured young talent like Tina Fey, Mike Meyers and Steve Carrell, to name a few.  Admittedly, I’m among the tougher crowds to please when it comes to comedy but the skits were so relevant and fresh that I think it would be difficult not to garner a chuckle from most anyone.  It’s great for older teenagers and college kids, but leave the little ones at home because it can be “R” rated at times.  I wonder which of the actors and actresses I saw perform might up end up on Saturday Night Live one day.

My second day in Chicago was cut short when the airlines started taking precautions for Hurricane Sandy and cancelled my evening flight.  The airline’s phone line was too busy to receive my call to reschedule my flight and I knew that if I didn’t leave that day, I would have to wait until after the hurricane hit to return to the East Coast.  I was skeptical, but heeded the advice of a friend who suggested I go to the airport to reschedule the flight since I couldn’t do so over the phone or through the website.  I ended up waiting in a line for customers whose flights had been cancelled for about an hour and a half and luckily got the last flight headed to my destination for three days!

If I had a more flexible schedule, I would have taken the opportunity to explore more neighborhoods and sights of Chicago.  On a previous trip, I took a very creative tour through Chicago Detours and explored the architecture and learned the little known historical secrets of the inner loop of the city. We saw the Tiffany glass ceiling at the Chicago Cultural Center, a skyscraper church and the most-loved department store in the city, all narrated by an excellent art historian who used Ipads to make the tour more interactive.  I took the tour in the heart of winter but managed to stay warm because the tour weaved in and out of the city’s underground pedway.

Winter may be the best time to visit Chicago, less crowds and plenty of heated museums. Hotel Lincoln will be debuting some windy discounts and Perennial Virant will be adding the preserved vegetables to the seasonal menu. How many people can say they braved the windy city in its coldest months?