The city of Norfolk in southeastern Virginia is home to the Naval Station Norfolk, a massive naval base on Chesapeake Bay, a maritime museum that features the Battleship Wisconsin, the Chrysler Museum of Art and according to locals, the birthplace of American Cuisine. But families who visit this culturally-diverse and exciting city will also be surprised to hear that Norfolk is famous for its interactive Mermaid Trail. 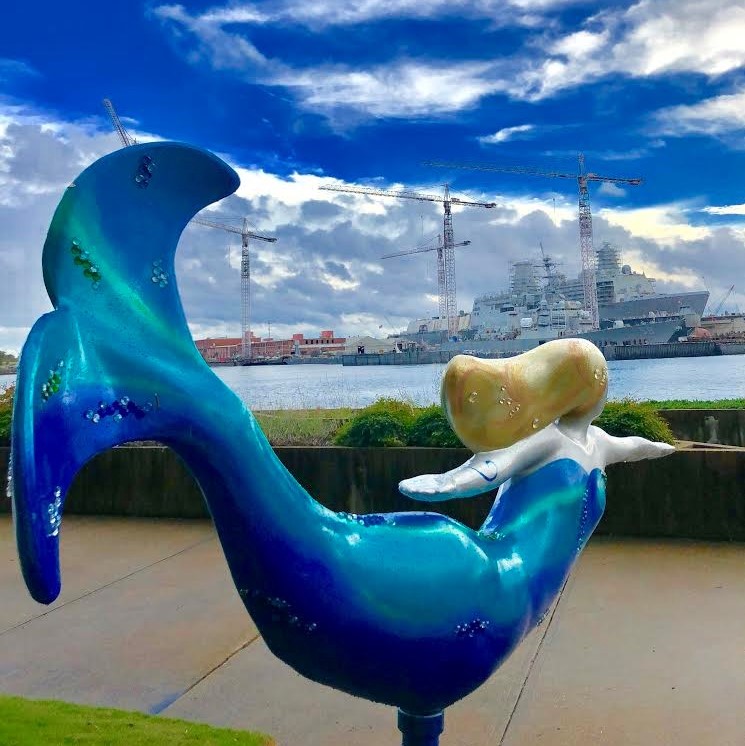 As many already know, mermaids are known as fictitious or mythical half-human sea creatures with the head and trunk of a woman and the tail of a fish. In folklore, they are conventionally depicted as beautiful and with long, flowing golden hair and often appear in cultures worldwide, including the Near East, Europe, Asia, and Africa. So, what brought Mermaids to Norfolk? An innovative idea, lots of planning, and the help of community members who wanted to make the city stand out in more ways than one.

The mermaid sculptures were first introduced to Norfolk by attorney Peter Decker back in 1999. The idea actually came from his wife Bess who was inspired by the cow sculptures and parade in Chicago. Through both a public and a private partnership, the Norfolk community held an annual Mermaids on Parade event. It was such a huge success that local bronze sculptor Kevin Gallup decided to mass produce 130 mermaid castings for artists to decorate. And as the saying goes, one thing lead to another and before they knew it, businesses and community leaders from Norfolk and the surrounding areas adopted mermaids at $2,000 a piece. They were auctioned off during the event and as they say, the rest is history.

These days dozens of mermaids can be found all throughout the beautiful city of Norfolk. Each one of the iconic mermaids reflects the nautical Norfolk theme, civic pride, and the diversity of the region. As a matter of fact, families can hunt for mermaids using a fun interactive map. If that weren’t enough, the city even has a craft store called the Mermaid Factory, the Village Mermaid, and a Mermaid Winery, which has an elegant tasting room and café. In other words, you can get your mermaid fix on and then some in one of the most beautiful waterfront cities in the country, if not the world.

To see all of the Mermaids in Norfolk, you can download the Mermaid Walking Map – along with the Mermaids on Parade Tour of Downtown Norfolk – or a Blank Mermaid Map for your own hunt. This is a fun way for families to get to know the city by foot as they are truly loved by both visitors and residents alike.