Food, Glorious Food — at the museums! 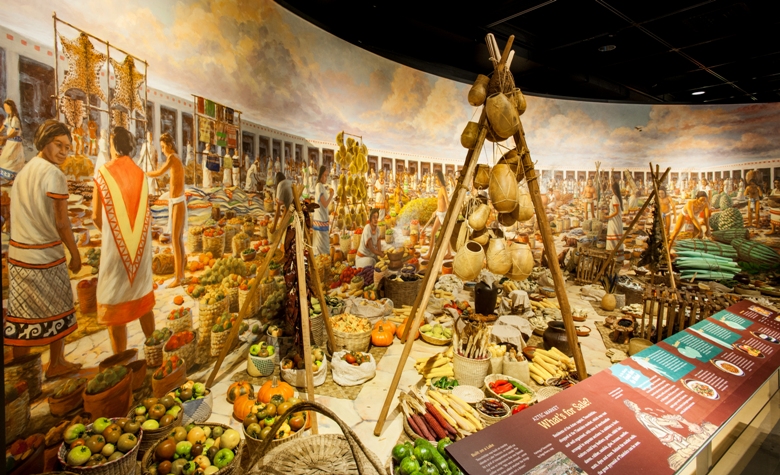 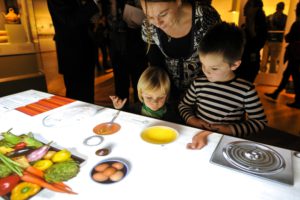 Ready to make tamales?  Maybe you’d rather get a lesson in preparing hollandaise sauce.

No, not at a cooking school or a restaurant.  We’re in New York City at  the American Museum of Natural History’s  terrific new  Our Global Kitchen: Food Nature Culture exhibit that not only lets us explore how food gets from farm to table, but the role food plays in different cultures. We can even time-travel back and see what we might have been eating at an ancient Aztec Market (cacao beans were so valuable that they were traded — one for an avocado; 30 for a rabbit; 300 for a turkey), in ancient Rome (salted sea urchin anyone?)  or at a English country house where Jane Austen might have eaten ice cream at the end of the 18th Century (only the gentry had ice cream molded into fancy shapes because they were the only ones who had ice!).  You can even see what Olympian Michael Phelps would have eaten for breakfast during training (a five-egg omelet was just the beginning!).

The cooking lessons are virtual  at the interactive Cooking Table (you can also learn to make Groundnut Soup from West Africa or  grilled Salmon and Peach Salad ), but there is a real kitchen—a first for the museum—which features daily samplings, taste tests  and demonstrations (come Jan. 14 for the program on healthy eating for kids).

This exhibit gives us all a lot to think about—and it’s a lot of fun (Play FoodShips, the interactive game that demonstrates how difficult it is to transport various foods), especially when we are all thinking  so much about food, cooking and eating during the holiday season.  The exhibit challenges us to think about what food means to us and talks about how special meals are served for all kinds of occasions, whether celebrating the harvest, the holidays or at a funeral.

You can even post your photo of a favorite dish on Instagram with hashtag #CelebrateFood.  (Just remember to include a brief caption!)  I loved the photo of the preschooler eyeing the wedding cupcakes!

At the same time, The Smithsonian’s National Museum of American History has also just opened FOOD: Transforming the American Table, 1950-2000  that explores how the way we cook and eat has changed. The exhibit includes Julia Child’s famous kitchen from her Cambridge, MA home as well as how immigrants brought their own dishes to the United States and the growth of the wine industry here.  There is even the chance to take a seat at a communal table and talk about food issues.

It’s not only at big city museums where food is front-and-center these days. In Santa Fe this month, at the Museum of International Folk Art,  a major new exhibit, New World Cuisine: The Histories of Chocolate, Mate, y Mas, opens, exploring food’s historic, cultural and geographic connections. The histories of chocolate and mate are of particular interest here in the Southwest and are illustrated by the many decorative cups, sippers, stirrers and pots used to make the popular beverages. The exhibit, which will run until January 2014, includes some 300 objects related to the gathering, preparation, serving and storage of food.

I always think travel is a great time to introduce kids to new foods wherever you are  and at the same time, food  is a great vehicle to help kids explore a new culture and to appreciate where their food comes from, whether you visit a farmer’s market, a sustainable farm , or a restaurant serving kid-friendly local eats.  In fact my youngest daughter Melanie has her own local food column in the Colorado College student newspaper – Food for Thought.

I love that these new museum exhibits can help put our complex food system—from where it is grown (check out the 280-plant hydroponic vertical growing system!)  how it reaches our plates–into context for all of us.

At the end of the exhibit, there’s a video that lets you peek into celebrations at Thanksgiving, a Chinese New Year, the Enid feast marking the end of Ramadan and more.

Take time this holiday season to not only show the kids how to make your  favorite holiday dish but tell them where the recipe came from.  Another latke anyone?