Four days in Los Cabos and the OneAndOnly Palmilla 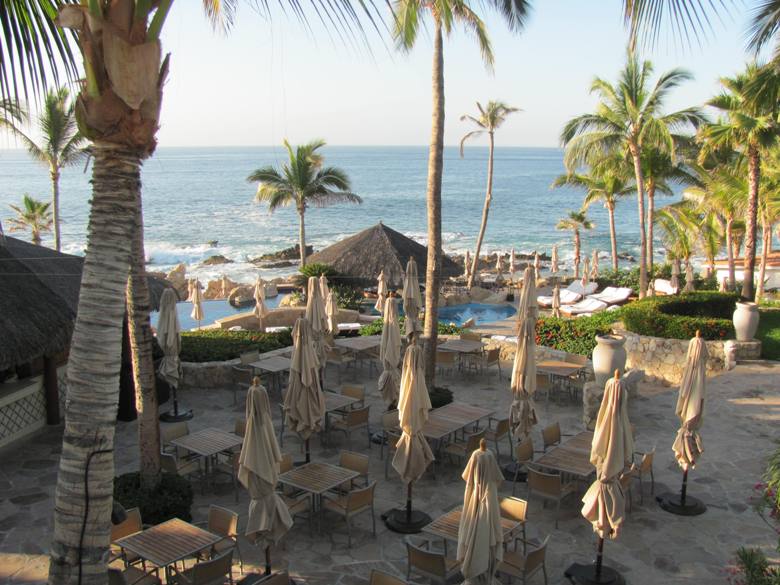 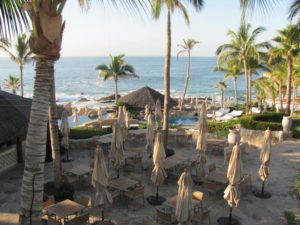 DAY ONE: Hammock under a thatched  roof on the beach, watching the waves crash in the Sea of Cortez or a comfy chaise overlooking the ocean in front of the pool?

After we arrive at One&Only Palimilla in Los Cabos, Mexico that is my only decision of the afternoon—other than whether I want a  Mojito or a Margarita at the swim up bar.

Yes, we opted for the pool, followed by a walk on the beach.

Cabo—Los Cabos  “the capes” is the name generally given to this area –a 20-mile long stretch of white sandy beaches and resorts between San Jose del Cabo and Cabo San Lucas. One&Only is between the two towns at the tip of the Baja Peninsula—the meeting point of the Pacific Ocean and the Sea of Cortez. It’s a less than two-hour flight from Los Angeles or Phoenix, with non-stops from Chicago, Texas and even Newark. People love it here because winter or summer, the weather is reliable—no rain except in September, I’m told.

In the winter, the area is especially known for terrific whale watching as the mama whales come here to calve.   In fact, our room at the ultra luxe resort is equipped with a telescope for just that reason.

Cabo is s also known for golf (my husband is playing on Palmilla’s 27-hole golf club  this morning) deep sea fishing, snorkeling, diving and just relaxing as are the folks we meet in the pool—a  couple from New Jersey celebrating a 40th birthday, a gay couple from LA celebrating an anniversary. There  is a wedding here  this weekend at the tiny  picturesque  chapel that has been on the property since it was first built as a private hacienda by a Mexican general in the 1950s.

One&Only is decidedly a luxury resort—172 rooms (ours has its own infinity pool overlooking the sea) plus a luxurious four-bedroom villa where Jennifer Anniston recently celebrated her birthday  with 24-hour butler service,  a restaurant Market overseen by Michelin-starred chef Jean-Georges Vongerichten and a staff that couldn’t do more for you.

They say this is a “a place of rediscovery…the pure pleasure of sun and surf,” designed to rekindle your spirit and sense of well being—whether you are here solo, as a couple or with your kids. Yes, with your kids.

This is not the place you want to worry about how much your drinks or dinner cost, but rather revel in the exquisite details (the beautifully woven blue, yellow and orange throw pillows on our patio chaise, the ornate headboard, tiled floors and bathroom with colorfully painted tile. When the resort was renovated in 2004 and taken over by One&Only, every effort was made to preserve its Mexican ambiance and it shows.

The always smiling pool staff brings you not only towels and bottled water but pillows both for your feet and your head. Consider that while this resort has just 172 rooms. There’s a staff of 700 including nearly 50 gardeners.  No wonder the grounds are so beautifully manicured!

But what is most interesting to me is how such an upscale resort—long a favorite among Hollywood celebs and pro athletes where rooms in season are often over $1000 a night —has gone out of its way to welcome well-heeled families with its complimentary kids’ club for kids 4-11, kids menus even at Market (how about a sirloin mini cheeseburger, fish of the day with mashed potatoes , chicken noodle soup or veggie sticks with different dipping sauces).

There is now KidsOnly Wellness programming too—from child yoga (inspired by animal poses)  to Kids Music (making sounds of nature using indigenous instruments) eating healthier (Kids get a tour through the kitchen and learn what “super” foods will give them more energy) reflexology, relaxation exercises, meditation in the form of storytelling, even the power of aromatherapy.  A teen program is in the works.

There is a separate family pool so that adults who are away from their kids or don’t want to be surrounded by any doing cannonballs in the pool can relax.  There’s also a special Family Sanctuary Spa Menu.

Let’s talk about dinner. We ate outside overlooking the ocean and swaying palms at Market, hot pink bougainvillea in planters on the terrace. The View was so spectacular from the bar area my husband didn’t even want to move for dinner.

And the food was delicious, the portions so ample that we were glad we shared. I’ll be thinking of this meal next time we’re eating leftovers Ribbons of Tuna, Avocado, Spicy Radish And Ginger Marinade…bib lettuce salad with mustard vinaigrette, crispy snapper with asparagus and shitake mushrooms and Sesame vinaigrette,   Because we’re in Mexico we ordered a side of black beans and avocado and finished with warm chocolate cake and ice cream. Yum!  “I haven’t had a bad meal here all week,” said the 40-year-old mom from New Jersey who celebrated her birthday with a private dinner with her husband on the beach which she said was “perfect.”

The downside: this place is pricey. If you need to be worrying about the fact that appetizers cost $25 or margaritas $19 you shouldn’t be here. But if you can afford it, it’s an idyllic spot.  Every room overlooks the ocean.

And though this resort has one of the few swimmable beaches, guests here and elsewhere in Cabo seem to prefer the pools rather than the crashing waves.

I’m writing this hearing the ocean crash outside our room, trying to decide if I’d rather cozy up on the green chaise on the stone patio or head down to a hammock on the beach where a butler will soon come to ask if I’d like something to drink.

Our room butler has just brought us fresh fruit and bottled water (we are in Mexico). We could opt for a day on the resort’s yacht ($2500) or deep sea fishing ($500).

A word about safety: TripAdvisor says Cabo is the safest areas in Mexico and in this manicured area, I would have to agree.  “People seem comfortable here..It’s like Los Cabos is part of the U.S.,” says Jesus Padilla, who was raised here and drives us the 20 minutes from the airport to the resort.

Next:  a very unique and family-friendly spa