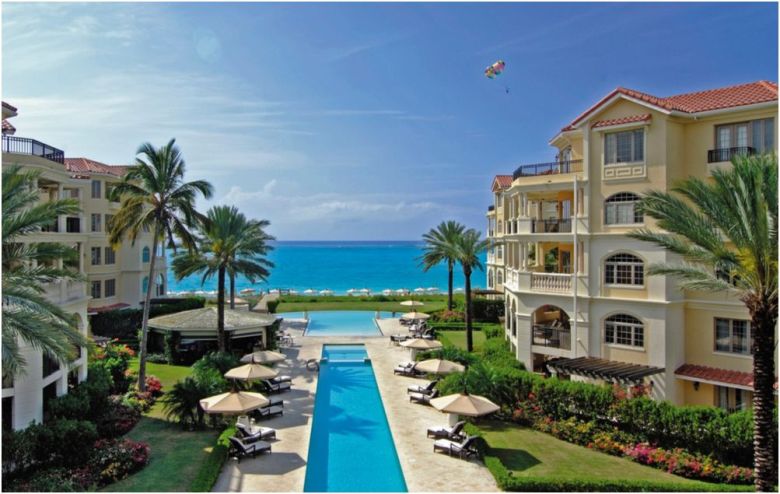 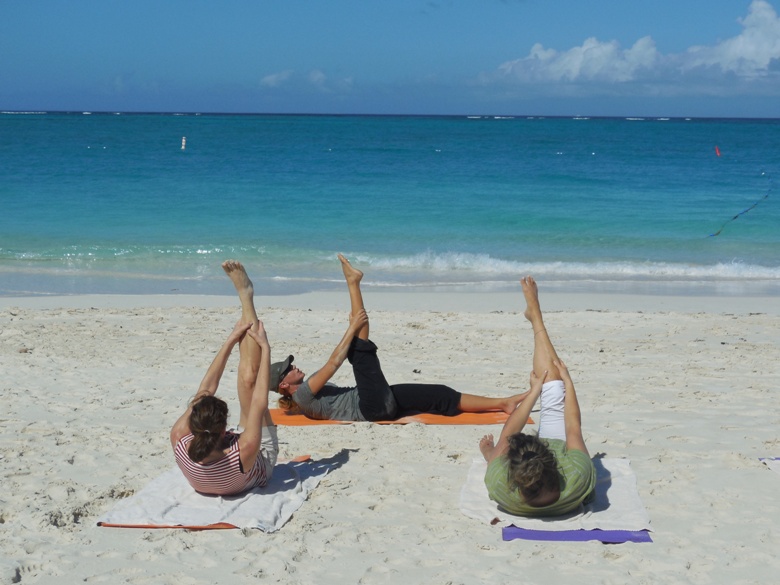 Yoga class at The Somerset

DAY ONE (Turks and Caicos) — The sky is blue, the water turquoise. The beach stretches for miles.  There are para-sailers, Hobie Cats bobbing in the water and little kids building sand castles.

There’s a yoga class on the beach—that’s us—me and my three closest friends from grade school on our annual girlfriends’ getaway.

“There is good energy on the beach,” says our excellent instructor Kim Mortimer.  “Look up to the ocean and take in breeze! “

We’re staying at The Somerset on Grace Bay, the 12-mile stretch of white sand beach Turks and Caicos is known for.  This is just a 53-condo resort—as compared to The Beaches’ 700 rooms down the beach.  Most of Turks’ resorts are like this. the general manager tells us, though more than 60 per cent of those flying to here stay at The Beaches.  Turks and Caicos is made up of 40 islands and Cays just 575 miles from Miami.  Providenciales, where we’re staying, is famous for its beaches, diving, snorkeling and fishing.

Though it is just after the holidays, there are a lot of families with young kids on the beach.

Somerset is the kind of place where snorkeling equipment, the use of the kayaks and the Hobie Cats is complimentary, as is a part time kids club but this place is designed for vacationers who want to be on their own, rather than at a big place like Beaches, no matter all the morning-till-night activities for the kids.

“We come on vacation to get away from the crowds,” explained one young father from the New York suburbs playing in the sand with his three year old, the youngest of his three children.

“It’s so relaxing here.  The food is good, the accommodations are good.”

We’re staying in a spacious three-bedroom unit steps from the pool and the beach.  There’s a full kitchen, should we be inclined to cook.  I also like that other resorts and restaurants are just a short walk down the beach.  Last night, we walked over to the Sands where we ate at Hemingways — famous for its conch chowder and empanadas.  The fresh fish and pork chops were delicious too.

The Somerset is spread out on nearly 5 acres with gardens, two pools—an infinity edge and reverse current—fitness center and of course the spectacular beach.  Urmas Karner, the general manager, gestures out to where the blue water changes color slightly—that’s the famous reef that rings the island; we’ve scuba dived here and on Grand Turk, which l loved because the excellent diving was just five minutes from the beach.

“I’ve been all over and the beaches are unbelievable here,” says Terry Drummey, the owner of Hemingways and the father of  two young kids.  Take a complimentary boat and go shell hunting at nearby Pine Cay, he suggests.

The Schiecks, from Fort Worth, had rented a house with their two young kids on VRBO and were paying for beach chairs on the Somerset so they could have access to the fantastic beach.  “All inclusives don’t appeal as much as being able to spread out in a condo,” said Ashley Schieck.

Anna Greenberg, here with her husband and two kids from Connecticut, said despite all the kids’ activities at Beaches, she doesn’t want the crowds—or to pay the freight for activities, food and drinks that her family won’t enjoy.  “I’d rather pay as I go and get what I want,” she said.  “Part of the experience is to explore outside the resort.”

And she has no qualms about hiring sitters where she is staying either so she and her husband can enjoy an evening out.  She noted that she got married here at the Palms, just next door to the Somerset, seven years ago, “and it’s much more kid friendly than I remember,” she said.  And a condo means that they can feed the kids what they want them to eat and when they’re hungry—no need to sit in restaurants or eat buffet meals all the time.

“Beaches isn’t my idea of a vacation,” she said. “It’s like a cruise ship.”I’d rather rent a villa and do activities with the kids.”

But of course traveling with young kids isn’t always a vacation—even with a nanny along, said her friend Lydia Grishin, a single mom of a toddler from New York City.  “I knew it wouldn’t be,” she said.  “”This trip is about the kids.”