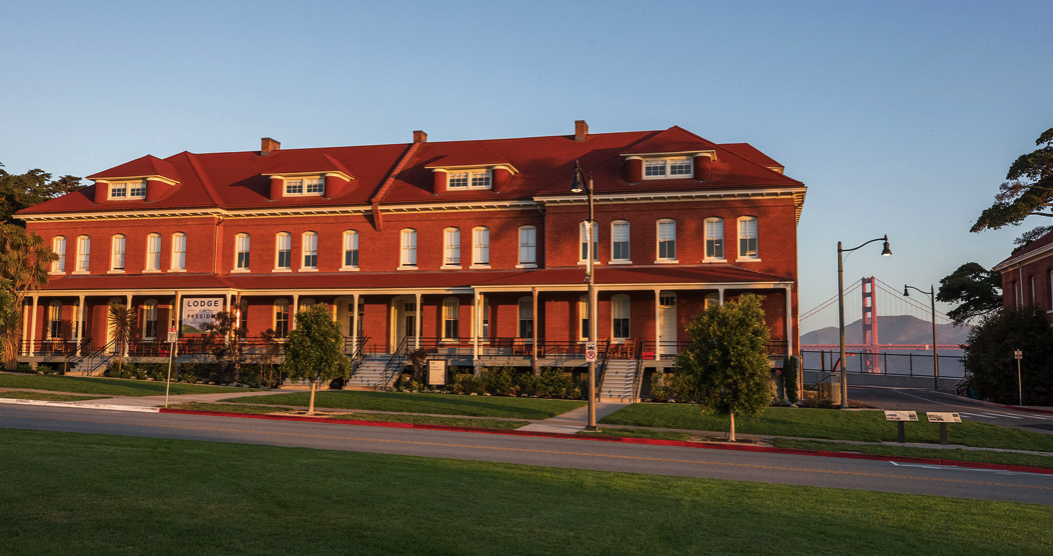 Maybe a hike within view of the Golden Gate Bridge, a long bike ride–maybe on an e-bike?  How about the chance to learn military history or see archeologists at work, play golf on a historic public course and see the kids have an outdoor adventure of their own equipped with binoculars, adventure map? And a place where can you spy a gliding Brown Pelican, hug a redwood or feel San Francisco’s famous fog? 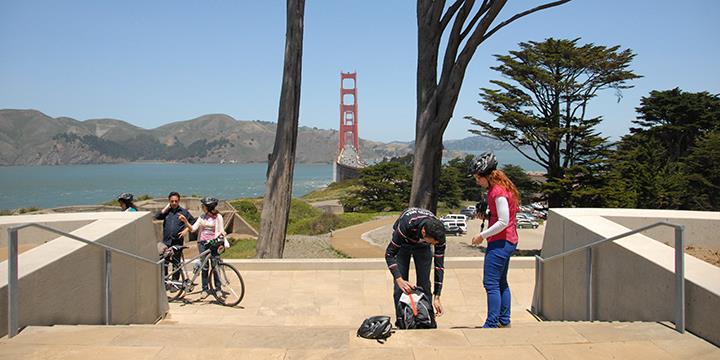 View of the Golden Gate Bridge from The Presidio

There’s the opportunity to explore a historic military fort and have a culinary adventure too with locally sourced cuisine. And you can stay at the closest hotel to the Golden Gate Bridge and even learn a bit about Walt Disney’s early life at the Walt Disney Family Museum.

Welcome to The Presidio, at 1,491 acres with 991 acres of open space, it boasts 24 miles of hiking and biking trails and spectacular overlooks with some of the best views in the city—the largest urban national park in the country welcoming 7.5 million visitors a year. 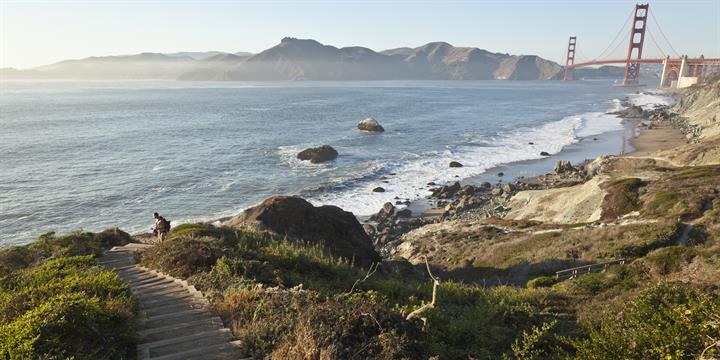 A trail among the old shore batteries at The Presidio

Challenge yourself at a climbing gym or trampoline —at historic Army plane hangers. Fly a kite with views of San Francisco Bay or put your toes in the cold water.

All this is a 25-minute free shuttle ride from downtown San Francisco. What makes San Francisco so great, suggests my daughter who lives here, is having the city and the access to the outdoors right here. 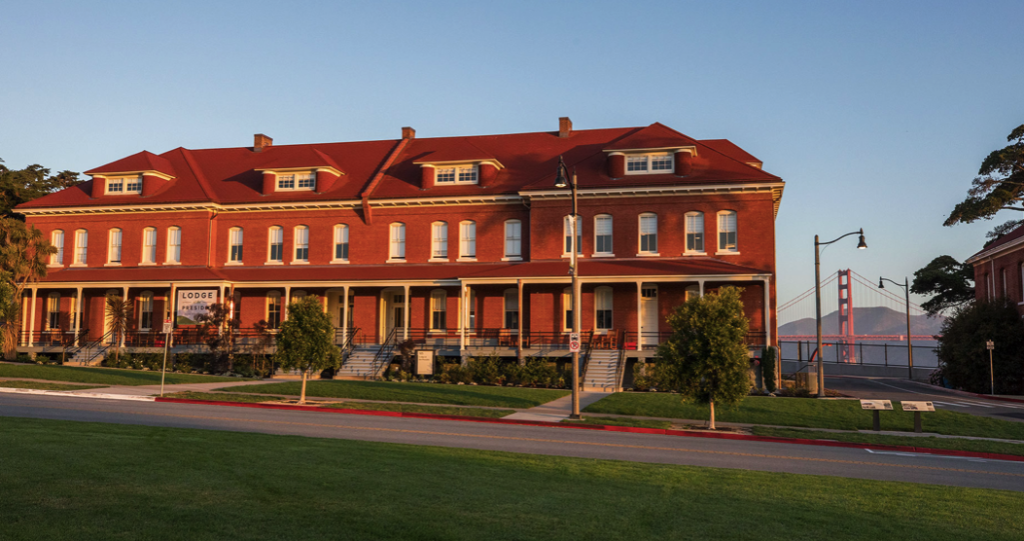 The Lodge at The Presidio

The Presidio has a unique history—and a future.  What was once a busy military base and then military hospital, is now managed by the Presidio Trust in partnership with the National Park Service and Golden Gate National Parks Conservancy.

More than 3000 people live here and many more work in 200 businesses (including Lucas Films) in what were once Army quarters and buildings Of the 870 structures, 470 are on the National Registry of Historic Places. Their rents help support the Presidio’s many programs including Geocache Adventures, the Kids Explorer  Backpacks that are available for a free loan at the Visitor Center, the popular Presidio Picnic Food Trucks each Sunday beginning April 7, the Archeology Lab where you can watch experts work on artifacts from the Spanish-colonial archeological site in front of the Presidio Officers’ Club dating back to the 18thcentury.

The Sports Basement offers rental gear for biking and camping while the Roaring Mouse on Crissy Field’s bike path also rents bikes for adults and kids.

There is art as well. The Presidio is home to the largest collection of British artist Andy Goldworthy’s public works in North America—Spire, WoodLine, Tree Fall and Earth Wall can even be explored on a three mile hike.

A powerful exhibition—and Then They Came for Me–explores the unjust incarceration of 120,000 American citizens of Japanese ancestry and their removal from their California Homes during World War II. Another exhibit–Exclusion: The Presidio’s Role in World War II Japanese American Incarceration–has been extended, exploring how the orders were signed in the Presidio’s Building 35 here in 1942.

Indeed, the Presidio is a wonderful place to explore the melting pot that San Francisco has been since its founding—Native American, Spanish and Mexican, Japanese-American and soldiers, including the famous black Buffalo Soldiers,  from around the country on their way to conflicts around the world. 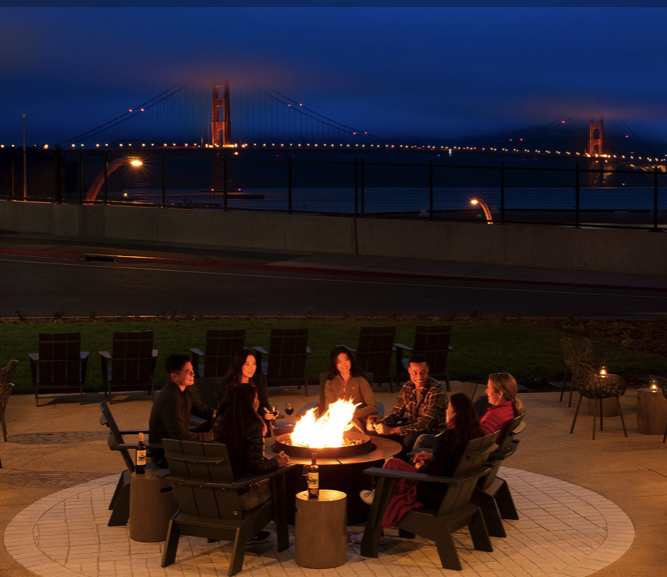 View from the Lodge at the Presidio at night

The Presidio’s Rob Hill Campground—the only overnight campground in the city—welcomes nearly 16,000 campers annually, including many kids from the inner city through programs for those who otherwise wouldn’t have the experience to get outdoors. There are 323 species of birds, mammals reptiles, amphibians insects and fish and its location on the Pacific Flyway attracts more than 65 bird species during their migrations.  See if you can find the tiny Western Pygmy Butterfly.

We are staying in one of the old barracks that have been transformed into the luxe  42-room Lodge at The Presidio, which opened last summer. The building on the Presidio’s famous Main Post had housed artillery, infantry and cavalry companies dating back to the end of the 19thCentury. “This is a great place for kids,” said Jeanna Capito, here with her husband and two young kids from Chicago as they were enjoying the happy hour—the kids cheese, crackers, home made cookies and fruit.  (There is also a complimentary continental breakfast.)

The Presidio’s history is showcased with memorabilia and historic photographs interspersed with pictures of birds and flowers guests can see here. There is a courtyard with a fire pit, a front porch with fire pit and a large lounge with a fire place—a comfy respite whatever your ages. Rates start at $275 a night.

Being here, Capito explains, is a nice antidote to the city, giving the kids the chance to safely run around outdoors and explore some of what makes northern California famous—the redwoods, the beach, the Golden Gate Bridge. They’ve even had the chance to listen as a local author read a new children’s book and planned to go to Fort Point National Historic Site where reenactors were going to fire a cannon.

There’s even a YMCA here with an indoor pool and the chance for an unusual history lesson at the Pet Cemetery, honoring those four-legged members of military families.

Capito adds that the “foodie” restaurants are kid friendly. We opted for the Presidio Social Club in historic barracks famous for its artisanal cocktails (you can even take one away in a bottle!) and northern California eats—crisped eggplant fries with wild honey, gruyere cheese toast, pasta, slow cooked artichokes with butternut squash and eggplant, herb roasted chicken and fantastic mac and cheese. There’s also steak,  meat loaf and burgers and for dessert…sugar dusted beignets with chocolate dipping sauce.

Good thing we walked back to The Lodge!

“How was dinner?” the front desk clerk asked. We gave him a thumbs up as we headed to bed, taking one last look at the Golden Gate from our windows.