Frozen Planet brings back memories of the Arctic 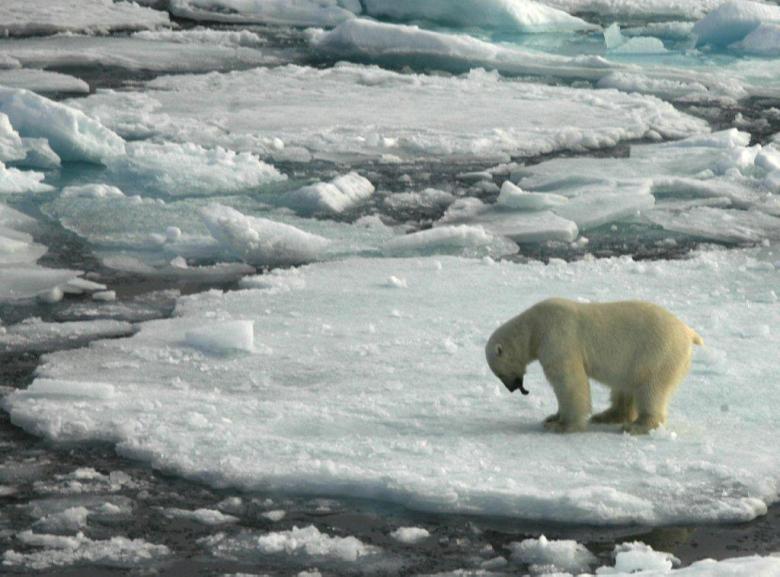 Evies polar bear with tongue out

The new Discovery Channel series Frozen Planet is reminding me of the exceptional trip to the Artic Circle last summer.   We were smack in the middle of a bustling fast food court—for Arctic animals.

Aboard the Lindblad Expedition’s National Geographic Explorer, in the Arctic, we were at the north entrance of Wood fjord in the part of northern Spitsbergen that’s covered with what’s called “fast ice.”

Naturalist Ian Bullock explains to me that there is an abundance food here.  Thus the Eider ducks, the walrus—yes we see a walrus!–the Minke whales and polar bears. So far this trip—and we’re only into day five—we’ve seen eight polar bears.  Expedition Leader Lisa Trotter makes a notch with a knife on the Bridge for each Polar Bear sighting.  The most she’s seen are 47. Imagine—seeing 47 polar bears in their natural habitat!

I love that these very accomplished naturalists are so available—standing with us on deck to answer our most arcane questions, leading walks, driving us on zodiac cruises, giving talks about what we’ve seen at the end of every day.

It’s drizzly and cold but no one on the deck is moving—not when a bear and her cub can be seen on the ice in the distance –and much closer through the scope, binoculars or the long camera lens they’ve got. We’re the guests here so we speak in whispers so as not to disturb the bears. Even the announcement for lunch is made with a steward holding up a big sign rather than over the PA system.

“With 24 hours of daylight, nothing is really scheduled except meals,” said Trotter.

“It’s exciting to see people so excited,” says geologist and naturalist Jason Kelley. “Every week you see new things through their eyes.”

That’s especially true with kids on board. This week there are only two. Memo to parents: Check how many children are sailing if that is important to your child.  Henry Douglas, 12, is a veteran of other Lindblad trips, and is disappointed there aren’t more kids his age but insists he is sorely disappointed there aren’t others to pal around with. The staff is being exceedingly accommodating but, said his mom Lisa, that can’t make up for a gang his own age.

The kids, Trotter says, get excited by different things than the adults—the chance to jump in the freezing polar water, for example, the sight of hundreds of birds on a cliff or the chance to learn to drive the zodiac.

Nine year old Evie Plunkett had never seen a glacier before this trip and was lucky enough to have a guide who landed the zodiac so people could walk and touch the glacier.

“The ice was a lot dirtier than I thought,” she reported.  Kids on board are being treated to behind-the scenes aspects of ship life—like seeing how the videographer works daily, hauling upwards of 25 pounds of gear,  shooting video to make a 30-minute movie of our voyage that guests can purchase at the end. Trotter explained to Evie that she shoots as much as 45 minutes a day to get just five minutes of edited video. Evie, of course, was most excited to see herself and her grandpa in the day’s edited shots. I was most interested to learn that each week’s video is completely unique—not shots, not even of the wildlife, are used if not from that particular week’s voyage.

Meanwhile, I’m taking full advantage of the photo instructors on board to learn more about the Canon camera I’ve borrowed from B&H Photo in New York. No question is too stupid thankfully. The onboard photography experts take the time to look at your images and tell you how you could have better composed them or not under-exposed them. They’ve got a whole area set up where you can download photos and they can help you edit your images. Yes, that tiny bear can look as if it’s just yards away. The more I learn, the more I realize I don’t know!

The one thing this trip calls for is patience—lots of patience and much more to see wildlife than in other destinations like the Galapagos Islands or Antarctica where the wildlife is so much more abundant.

“It takes some work to see the wildlife,” acknowledges expedition leader Lisa Trotter, who likens her job to being “an orchestra conductor and hope that by the end of trip, I’ve made a symphony for the guests.”   The fjords where we’re cruising today, we’re told, offer some of the most impressive scenery here, at the head is the Monacobreen glacier that was mapped by expeditions in 1906-07 organized by the Prince of Monaco.

Life has slowed down on this ship with everything revolving around what we might see. There is only intermittent email so I find myself reaching for my Blackberry only to realize there is no point.

We learn that two thirds of Svalbard Island is completely covered by snow and ice, though in the last few years the ice is retreating so fast that it left some beers trapped on land.

There are some 2,300 to 2,600 polar bears in this region—it’s hard to believe how large they are—three times bigger than a lion! Their fur-covered paw can be up to 2 feet in diameter.

Their life is about hunting for food, gaining weight and conserving energy.

Unfortunately, I can totally relate, I think. I smile looking down at the giant footprints on the ice floe.