Fun and adventure atop the Sydney Harbour Bridge 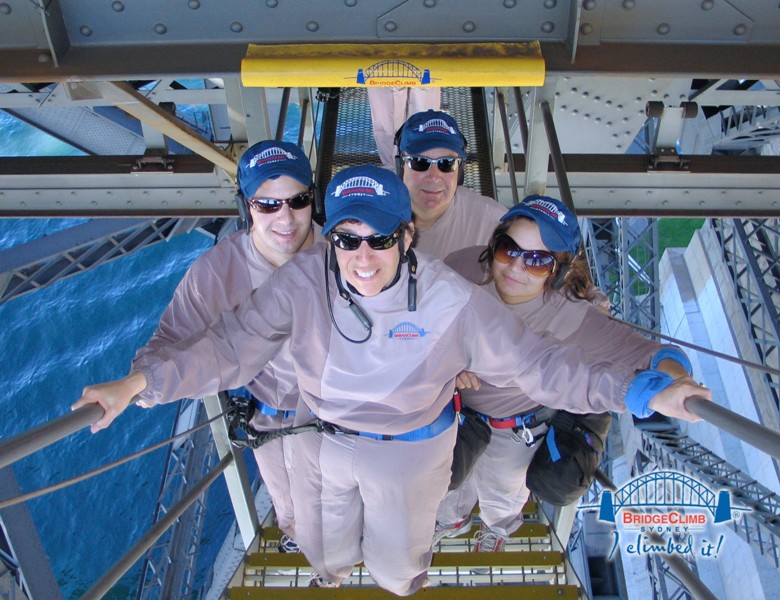 Traffic whizzes by below. Trains rumble. The view of Sydney, Australia, is stupendous – the famous Sydney Opera House, ferries and sailboats making their way through the harbor, the city skyline – but I have to force myself to look down.

We’re on our way up 1,439 steps to the top of the Sydney Harbour Bridge, 440 feet high, and I don’t know whether to be exhilarated or scared. We walk along catwalks, up four ladders and over the famous arch to the bridge’s summit, posing for pictures when we get there.

Nicole Kidman has done it. So have Al Gore, Bruce Springsteen, Prince Harry of Britain, Oprah Winfrey and scores of other celebrities, politicians and athletes who have visited Sydney. I wonder if their knees were quaking like mine. Our affable guide, Victor Martin, tells us that he recently climbed the bridge with an opera singer who belted out an aria when he got to the top.

But climbing to the top of the Sydney Harbour Bridge clearly isn’t just for the rich and famous. On the contrary, For Australian kids, I’m told, it’s become a kind of rite of passage. (You have to be at least 10 to climb)  Hundreds of couples have gotten engaged on the climb.  A group of New York City firefighters and police officers climbed the bridge after 9/11, flying an American flag at the top. A 100-year-old woman climbed it. Oprah Winfrey did along with the viewers along as part of her Ultimate Australian Adventure.

Some  of the most memorable vacation experiences just happen—a four year old catching dinner on her Snoopy fishing  pole(yes, that was my daughter), screeching to a halt when you first see a moose in Grand Teton National Park, Others are orchestrated—breakfast with Mickey Mouse and pals (my youngest howled whenever they came near.)

It’s gratifying when an expensive  experience that is billed as one-for-the-memory books is really all that it’s cracked up to be. Over 2.6 million people have made the 3.5 -hour climb (there is an Express Climb that will take you just  2 hours and 15 minutes to the top and back down again) since   BridgeClimb opened in 1998, fast becoming a top attraction in Sydney – at least for those game enough to try an unusual adventure that can’t be replicated anywhere else in the world on a bridge this big. That’s probably why this climb has won a slew of tourism awards.

The Sydney Harbour Bridge, perhaps the most recognized symbol of this beautiful city, opened with great fanfare in 1932. It took several thousand men, 52,800 tons of steel and 6 million rivets to complete. It’s still the world’s largest (but not longest) steel-arch bridge.

Letting the public climb it was the idea of Australian entrepreneur Paul Cave. After arranging a climb for a group of international businessmen in 1989, he spent the next nine years convincing officials that this could be a safe and successful venture.

Today, the climb is on the “to-do” list for locals as well as tourists.

Bronwyn Healy-Aarons, 22, got her climb ticket as a birthday present. “I expected it to be harder, but it was very leisurely,” she reported afterward. “Fantastic to see Sydney that way!”

You can climb during the day, at twilight or even after dark with headlamps. People climb in all weather, except when there’s lightning in the area. The ascent is so gradual that it’s not particularly strenuous. You can opt for a Discovery Climb that takes you into the steel heart of the bridge of a Bridge Climb that focuses on the stellar views from the Pacific Ocean to the Mountains    Costs vary depending on the time of day, typically $198 Australian which is about $206 US dollars.)

We made the climb on a May morning – my husband Andy; son Matt, who had just finished a semester studying in Australia, prompting our trip; and 14-year-old daughter Melanie, who uncharacteristically admitted before we start that she was  “kind of scared.”

Me too. I reassured her that we’d be carefully tethered to a cable for the entire climb, and even if we should stumble – which we shouldn’t – we’re too far from the edge to fall off.

Safety is taken very seriously. We suited up in special gear. Everything from sunglasses to hats to jackets is clipped to our one-piece BridgeSuits so that it doesn’t fly off. We practice walking tethered to a catwalk just 10 feet off the ground. It takes more than a half-hour just to prepare.

Our guide, Victor, who has been leading climbs for five years (more than 2,000 at last count), tells us that it’s more a mental challenge than a physical one. But if we decide mid-climb that we don’t want to go to the top, other guides will be available to take us down via elevator.

Our group included a honeymooning couple from Washington state, a businessman from Florida and four young Sydney residents.

The closer we got to the top, the more relaxed Mel and I got. The final stretch to the summit was surprisingly easy because the steps are so wide, more than 6 feet across.

Victor snapped photos as we took in the once-in-a-lifetime view on a  blissfully  sunny morning. The weather was perfect. We didn’t even need the fleece jackets we’d been issued. Victor regaled us with stories of how the bridge was built – guys tossing hot rivets to each other, relying on their balance rather than cables to keep from falling.

We’re awed by what they accomplished.

We head down smiling.