Fun off the slopes: learning to build a snow sculpture in the mountains 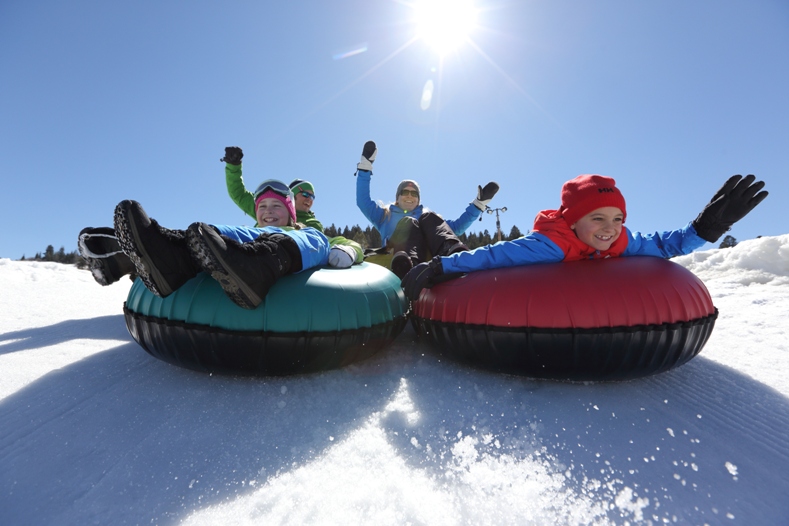 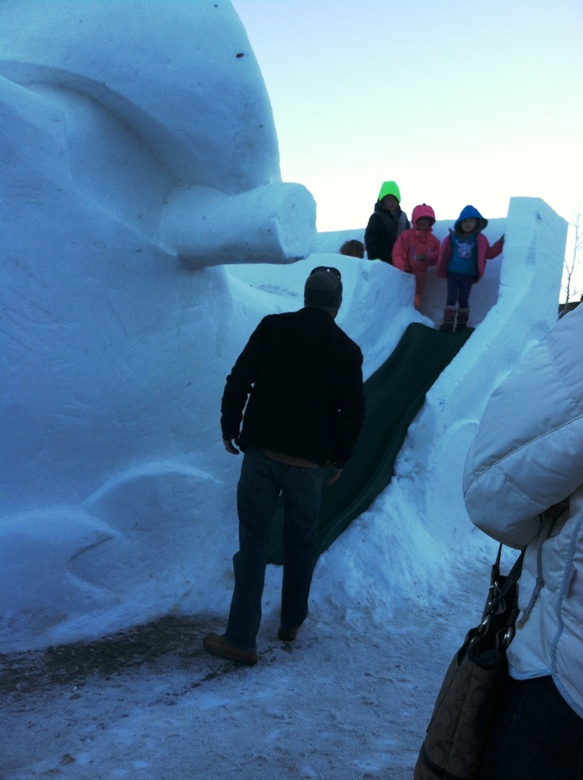 Fun on a snow slide at the sculpture competition

Grab a clean plastic garbage can. If you don’t have one handy, a big box will do. Now you’re ready for some fun in the snow!

Really. Fill them with snow, let the kids stomp the snow down and let it freeze overnight. Turn the cans upside down and presto — you’ve got a big block of snow.

Now you are ready to get creative and build a snow sculpture. Get out some cheese graters, putty knives, spoons and paint scrapers, suggests Jeff Olsen, a retired Wisconsin teacher, who has been one of Team Wisconsin’s carvers at the huge International Snow Sculpture Championship that gets underway in Breckenridge, Colorado, next week. (The sculptures will be on display through the end of the month and you can vote for your favorite.)

Mountain resorts across the country offer an ever-growing array of off-the-slopes activities. (Check out the Taking the Kids Fun in the Snow section.) There’s a new Tubbs Snowshoes Adventure Center at Woodstock Resort in Vermont, for example, an ice fort on top of Keystone Mountain in Colorado, the chance to visit a National Elk Refuge in Jackson Hole, Wyoming, an opportunity to soak in a hot spring in Steamboat Springs, Colorado, zipline at a growing number of resorts from New Hampshire and Vermont to Big Sky, Montana and race down tubing hills like at Gorgoza Park in Park City, Utah, where the kids can try mini snowmobiles. 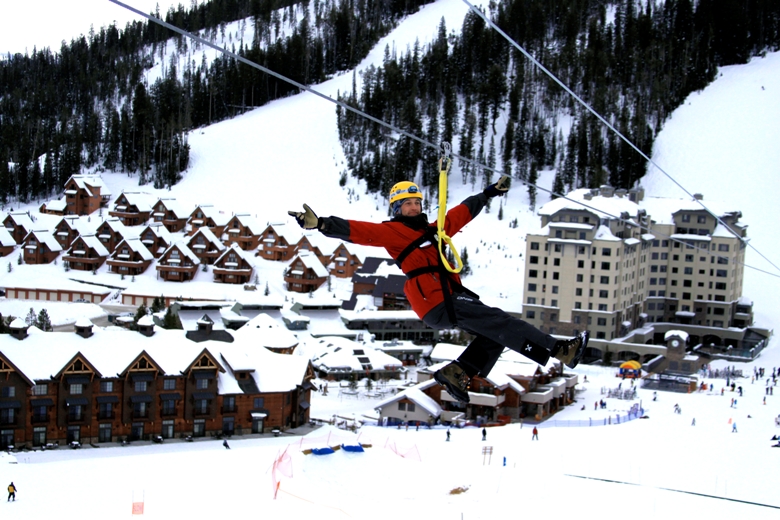 (Don’t forget that January is Learn to Ski and Snowboard Month with a variety of well-priced deals at resorts across the country that encourage you to get out on the slopes, including, of course, in Colorado. Check out The Taking the Kids Guide to Fun in the Snow across the country and beyond.

But you can’t do many of these activities at home. That’s what’s so fun about chatting up the snow sculpture teams from around the world and — seeing their creations — where better for the kids — and you — to get inspired to build your own sculpture either at home or near where you are vacationing in mountain country? “There’s no limit to what you can do!” suggested Olsen, who has been snow carving since he was a college student in the 1960s.

The carvers are all ages and all professions — teachers, marketers, whitewater raft guides, store managers. You’ll find other snow- and ice-carving competitions like the U.S. National Snow Sculpting Competition taking place the end of January in Lake Geneva, Wisconsin, and at the Quebec Winter Carnival the first two weeks in February in Quebec City. (Check out the giant ice palace!) The Harbin International Ice and Snow Sculpture Festival in Harbin, China, lasts a month (until Feb. 5) and is one of the largest in the world in the bitterly cold “Ice City.” The St. Paul, Minnesota (Jan. 22 to Feb. 1) Winter Carnival includes the Minnesota State Snow Sculpting Competition and the creation of a Snow Park out of giant blocks of snow on the Kidway of the Minnesota State Fairgrounds. (Don’t miss the giant snow slide, which is expected to be more than 110 feet long!)

Breckenridge is celebrating the 25th anniversary of its ice-sculpting competition. It, of course, is one of Colorado’s quintessential mountain towns — just two hours west of Denver with its historic (the largest historic district in Colorado!) and picturesque downtown that first boomed as a mining town in the second half of the 19th century. A huge mountain resort (more than 2,800 acres and five peaks) run by Vail Resorts with a first-rate ski school, the Breckenridge Outdoor Education Center, Breckenridge also offers programs for adults and kids with special challenges and even a Mountain Top Children’s Museum that offers a parents night out program with special arts and crafts and dinner.

Thousands come to see the sculptures — the carvers start with 12-foot-tall blocks of snow weighing two tons. In the course of just 65 hours, amazing creations emerge — everything from children tubing down a hill (team Breckenridge won the competition last year for only the second time in the past 24 years) to Ullr, the Norse god of snow to the dark side of the moon.

“This is so different than what you see in real life,” said a very impressed Lily Patrick, visiting from Fort Collins, Colorado, during last year’s competition. “It’s amazing that you could make these out of snow,” added Camdyn Wather, 9, from Denver.

“In Breckenridge, we wake up to fresh snow and we’re excited,” said Keith Martin, the captain of team Breckenridge. The winning sculpture, he explained, was designed to make you smile thinking of all the fun you had as a kid playing in the snow.

Weather permitting you will be able to see the snow sculptures until Sunday, Feb. 8 in the area around the Riverwalk Center. (Free public transportation is available throughout the town from morning until midnight.)

Certainly these giant sculptures take a lot of skill and tools — everything from a yardstick for measuring, chisels to chip hard snow, saws, trowels and cheese graters (useful to define the shapes).

But Tom Day, a local realtor and member of Team Breckenridge, wants kids to know that as fantastic as these creations are, building a snow sculpture doesn’t have to be that complicated. He recalls using a plastic garbage can to create a dolphin with his son — when he was just three.

“Pick an animal shape, or a flower,” suggested Alex Dostie, a carver from Team Vermont. “Buy a small toy so you have a model.”

And then go at it. “It’s all about having fun in the snow,” said Keith Martin.

(Follow (at)takingthekids on Twitter and Facebook. If you are visiting Colorado, check out Eileen’s Kid’s Guide to Denver, Boulder and Colorado Ski Country, the latest in her series of kids’ city guides.)