Futbol is life — at the Los Angeles County Museum of Art 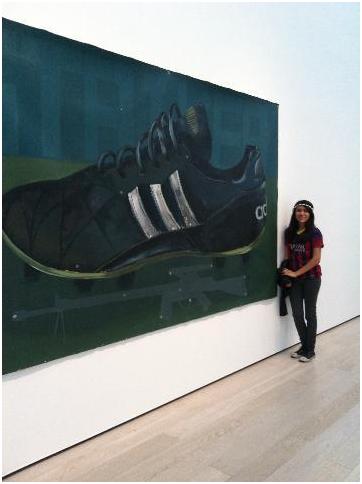 At the LACMA futbol exhibit

LOS ANGELES, California—Soccer, or “Futbol” as many say, is the game where there are two teams, two goals, and each team kicks around a ball trying to score on the other team. As simple and boring as that sounds, there is one event every four years that makes people turn their heads to their screens: the FIFA World Cup.

And for those of us who know there is more to soccer than just the FIFA World Cup, we follow our favorite clubs, or local teams, every day. Whichever kind of soccer fan you are, we can all  come to one agreement: soccer is the beautiful game that can change us on and off the field.

Going to the LACMA (Los Angeles County Museum of Art), I wore my Real Madrid jersey proudly while my friend was in her F.C. Barcelona jersey. Even though the escalator we were riding wasn’t the way to El Clásico*, this was the way to the new exhibit at the LACMA called Fútbol: The Beautiful Game.

Fútbol: The Beautiful Game is an art exhibition to examine soccer through issues such as nationalism and identity as well as share the human experience through different cultures, according to LACMA.

When I was with my friend Alanis, 15, the first room we walked into, all the vibes hit us. We could hear the cheers and commentary fill the room, we could see colors of teams that people wear proudly, but we saw one piece of artwork that instantly hit us. Parallel.

“Parallel” by George Afedzi-Hughes is an Adidas cleat representing over a rifle gun. Hughes’s intentions were to emphasize how government sometimes interferes by trying to gain popularity, electoral advantage, or something they want. This piece of art was touching because it reminds me that soccer has its ugly side to it. When politics get involved, it changes the game for many, and unfortunately not everyone can enjoy it the same way anymore.

Despite artwork that showed the dirty truth, there were plenty of favorites to look at!

For example, one of them was “Post Match” by Leo Fitzmaurice. Fitzmaurice, a British artist, put together a series of jerseys folded from using cigarette cartons. Many artists can paint, draw, and color, but this appealed to me the most because the cartons were all of different colors. As a vivid player and fanatic, the colors of your team are the most important.

Soccer fans can be created anywhere, but when they are born through their cultures, they may come across “the” dream. No, not world domination. I’m talking something better. The dream of being the one everyone watches. The DVD “Volta” (w/ Bandeira) by Stephen Dean gives you a taste of what that dream is like. And again, no, you’re not about to score a bicycle kick on Iker Casillas. There’s a reason why I said this appeals to those fans that are born because this DVD lets you watch and hear the fans during games. I’m talking chants, giant flags waving, full stadiums, the whole enchilada! Everyone is sharing the colors for the same team for the same passion.

The vibes of passion, soccer, pride, honor, and heartbreak fill the exhibition. So, what did I think was the most interesting artwork? Let me tell you.

There was a television screen broadcasting what looked like a recorded soccer match. The label next to it said, “‘Mexico vs Brasil’ by Miguel Calderón, 2004.” I sat down with Alanis, and we watched. I kept a look out for any Mexican players I could recognize, even though this game seemed like I was only 6 when it happened. Cuauhtémoc Blanco was the first person I located on that field. I remember hearing his name when I was young as his celebration of “The archer” was also recognizable.

Anyways, going back to why this was the most interesting artwork, I sat down with Alanis, and we watched the game. Minutes in the match, Mexico had scored. And again. And again. And again. I looked at the fans in the background, they were jovial as they should have been, so I thought to myself, ”This must be real!” There were other great highlights like Jorge Campos, former Mexican international goalkeeper, saving a penalty kick driven on target. I was ready to start yelling in the exhibit as I watched Mexico pound Brazil with more goals by the minute!

However, let’s just say if I didn’t do my research, I would have felt like an idiot

Miguel Calderón, a Mexican artist, carefully edited hours and hours of previously recorded matches between Mexico and Brazil. The final product came together to fake a match in Mexico’s favor with a 17-0 final. When I found this out, I exclaimed, “Give that man a cookie!” I was fooled! This was my favorite piece of art at the exhibit.

Fútbol: The Beautiful Game is an exhibition filled with the perspective of soccer in many ways I have and have not seen before. I think this exhibition is what keeps fans loving soccer and where people who disliked soccer now love it. I asked Alanis what she thought and I couldn’t agree more when she turned to me and said: ”I think more about soccer, not just as a game. It’s life.”

El Clásico* is the nickname of the rivalry between F.C. Barcelona and Real Madrid in Spain.