Generations love the game — at the Baseball Hall of Fame 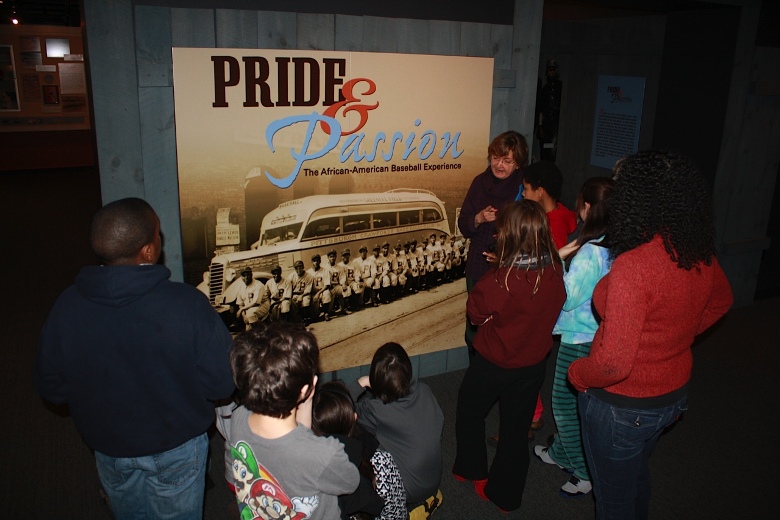 COOPERSTOWN, NY (Day 1 of 4) — Austin O’Toole was having a lot more fun at the National Baseball Hall of Fame museum than his kids.

But of course, he’s the biggest baseball fan in the family—he was decked out in a Red Sox Jersey, as was his baby daughter Scarlet.

And if you don’t love baseball, this isn’t an easy museum for kids.  There are few inter-actives and most exhibits are behind glass. “More like a library,” says Austin O’Toole, noting that when he was 10 and came here with his dad, he knew a lot more about the sport and the players than Andrew and his younger brother Hayden.

“There is a lot to read here,” said Andrew. “And all I really care about is the Red Sox.”

There is a lot to read at every exhibit at the Hall of Fame, celebrating its 75th anniversary this month.  But unlike other museums that kids are more accustomed to—with apps to guide them through exhibits and inter-actives at every turn,  this iconic place inspires conversation with parents and grandparents, suggests Brad Horn, who oversees educational initiatives here.  “The exhibits start the dialog,” he said.

There are small icons to help at some exhibits. One talks about how players used to keep scrapbooks of their travels with their teams—menus, photos news clippings.  “What do you keep when you travel?” the text asks.

In another spot about women in baseball, it explains how at different points in history, women played on men’s teams and weren’t’ always welcomed.  “Have you ever felt like you were different than anyone else?” the text asks.

Certainly the Hall of Fame is amazing.  There’s a new exhibit about Babe Ruth: His Life and Legend.  There are more than 40,000 artifacts representing all facets of the history of baseball—bats, balls, uniforms–even 135,000 baseball cards.

And certainly it attracts a lot of famiies—70 percent of visitors in the summer when more than 100 Little League teams a week are playing in tournaments here.

The Viva Baseball! Exhibit explores baseball in Caribbean countries—and the growing numbers of Major League players from that region.  There’s a simple game kids can play to help them understand what it must be like for players who don’t speak much English.  What would they ask for to get a drink on a hot day?

You lift flaps to see if you’ve chosen right… not jucio (that means judgment)… not aguacote (that’s an avocado). You’d want te healdo (iced tea.) This exhibit, incidentally, is the museum’s first that is in Spanish as well as English.

“We’re from the Dominican Republic and I didn’t know so many players came from there.  That was really interesting,” said Javier Gonzalez, here with his family from Delaware.  “I’m learning a lot about baseball I didn’t know.”

“I’m a history person,” explained his older brother Gabriel, 12. “I like all the history about all of the players.”

There’s certainly plenty of that—stories about how when Hank Aaron left his home in Mobile AL at the age of 18 to play baseball, he’d never been around white people.  Baseball teams are called clubs because they held meetings in a clubhouse.  There are the uniforms that women wore in the 1940s—short one piece dresses.  We learn that in those days, women wore dresses everywhere so their uniforms were adapted.  The youngest player  ever to play major league baseball during World War II was only 15 (Joe Nuxhalll who played in 1944 for the Cincinnati Reds).

Girls might be surprised to learn that in 1972, an 11 year old girl, Maria Pepe, had to go to court for the right to play on a boy’s team and by the time the court said she was right, she was too old to play.  “I still don’t think there’s enough for girls here,” said eight year old Alma Gonzalez.

Kids who are baseball fans like the Baseball Cards—a sample of the museum’s huge collection—one for the Books which focus on batting, pitching, fielding, base running and team records complete with interactive trivia sections and artifacts players used to achieve those records.

Today’s Game features a locker with artifacts and memorable moments  from the last decade for each team.

“I thought it was just going to be a big hall with pictures of hall of famers.  It’s a lot better than that,” said Adam Poe, here with his family from Des Moines.

In case you are wondering why the National Baseball Hall of Fame is in Cooperstown, a small town 70 miles west of Albany—it all goes back to a 1905 commission charged with determining where baseball began.

They discerned that Abner Doubleday was the first to make changes to a game named “town ball,” which was basically a large group of players vying to catch fly balls.  Doubleday marked out a diamond-shaped field in the dirt, limiting the number of players and adding four bases.  That’s why it is called baseball!

Some 27 years later, an old baseball found in a farmhouse a few miles from Cooperstown supported the Commission’s findings.  The homemade ball with a stitched cover had a cloth stuffing—just like modern balls.

The next year, 1935, plans were underway in Cooperstown to celebrate Baseball’s 100th anniversary in 1939. The first election to the Hall of Fame was held and the National Baseball Hall of Fame and Museum was dedicated on June 12, 1939.

This June 12 will be celebrated, followed by Hall of Fame Weekend July 25-28  the Class of 2014 will be inducted—Tom Galvine, Greg Maddux, Frank Thomas, Bobby Cox, Tony La Russa and Joe Torre.

Sixteen year-old Eric Holland acknowledges he’s not a huge baseball fan—but his dad Jack is.  “He knows all about baseball and that’s made it really cool,” said the Long Island, NY teen here for his first visit.

“I never watch baseball, said his friend Max deGeorge. “It’s the history that makes it all interesting.  “

Austin O’Toole, meanwhile, is having a blast—probably a better time than his two sons.  “This is more for me than them,” he says laughing, holding his baby daughter.

“Maybe she’ll be a big baseball fan,” he says.