Get your own Santa visit at Sandestin 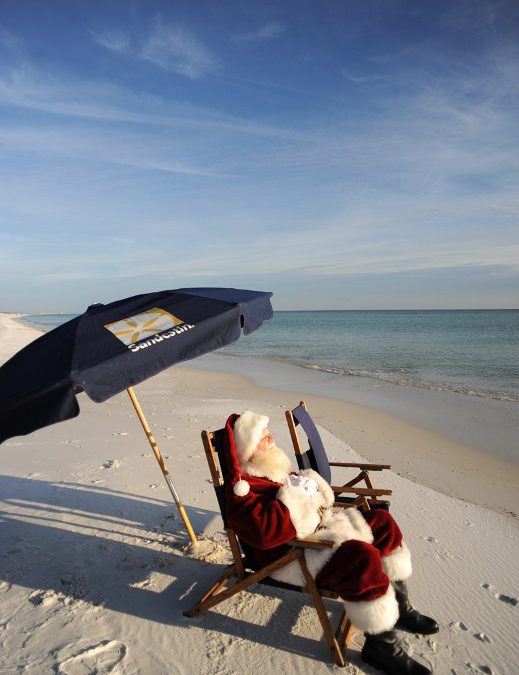 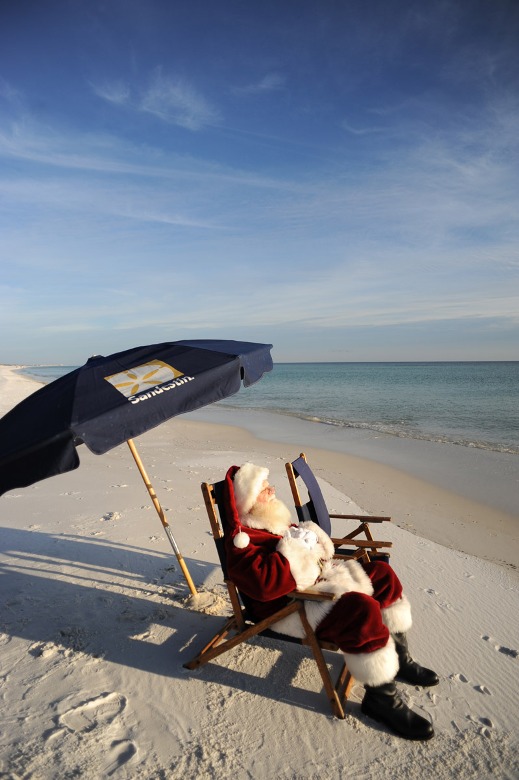 Santa On Beach at Sandestin Resort in Florida

DAY TWO — I walk into Santa’s office.  OK so he is graphic designer Tommy Usry who has worked for the Sandestin Golf and Beach Resort for more than two decades. But he sure looks like Santa with his well-fed belly, white beard, gold rimmed specs and ready smile. He drives a red VW bug convertible with a license plate that reads “Jolly1” and before Halloween, he’s already decorated his office with holiday lights.  His Santa bag, complete with bells, hangs on the door.

And he hasn’t even undergone “Santafication,” yet. That’s when he gets his salt and pepper hair, beard and even eyebrows bleached for the season. And he can’t wait.

Usry may be a graphic designer by profession but come Thanksgiving weekend, he is Santa in Residence at this sprawling Gulf resort—Sandestin is spread over 2400 acres with 1400 accommodations, four golf courses, 19 pools,  15 tennis courts, and seven acres of white sand beach that seem to go on forever and where if you’re lucky, you might spot a dolphin or two (www.sandestin.com).

If you are staying  at the resort, you can arrange to have Santa come to your condo or cottage—gift in hand (he presented me with a soft stuffed lamb complete with a tag that reads “To Eileen from Santa”) and read a holiday story to the kids. The charge ($60 for one child, $10 for each additional child) is donated to Toys for Tots (call 866-91-BEACH to reserve).

“If they are younger than two, they don’t have a clue who I am,” says Usry, who has no children of his own. If they are between two and three, they may be scared. After three, they run to me like crazy.”

Last year—the first year of the program—some 30 families signed up and reservations are already coming in for this season.

This isn’t like a mall meet and greet, snap your photo and leave. Usry spends a half hour with your kids—he’ll even be prepared ahead to know their names and special likes.  “It really is rewarding,” he says, adding with pride that he belongs to a statewide organization of real-bearded Santas called Palm Tree Santas.

He will, of course, be on hand for the tree lighting here the day after Thanksgiving in the resort’s Village at Baytowne Wharf (maybe he’ll arrive on the zip line) He not only helps light the tree but inaugurates the fireworks display.

Sandestin seems made for family holidays with all of the special events (an amazing Thanksgiving brunch so good you won’t have to cook dinner and only $35, half for the kids) activities, the beach and plenty of room to spread out.  You can even arrange to have your groceries delivered if you don’t want to waste time shopping. Did I mention the huge New Years Eve festivities, complete with fireworks in the Village OF Baytown Wharfe?

A lot of destinations boast that they have something for everyone but this place really does.  For Foodies, there are some 19 restaurants and a new culinary team hard at work upping the quality and the experience.  (The crab cake at FINZ is to die for as I’m told are the chocolate dipped Churros).

Dads traditionally golf the day after Thanksgiving—the busiest golf day of the year, says golf director Rick Hileman—while moms and grandmothers head to the SilverSands Outlet Mall—said to be the largest designer mall in the country with more than 100 stores a mile away or the upscale Market Shops that’s even closer.

Give yourself an early holiday present and  go out on a fishing charter,  sign up for a tennis clinic, kayak in the early morning calm or simply sit and do nothing on your porch.

I can’t think of a better way to spend the holidays.

All this at a price that won’t bust the budget.  (Look for holiday deals THAT WILL save you as much as 25 percent off whether studios or villas, starting Thanksgiving weekend. www.sandestin.com)

The best part: Fresh towels are only a phone call away.  So is Santa.