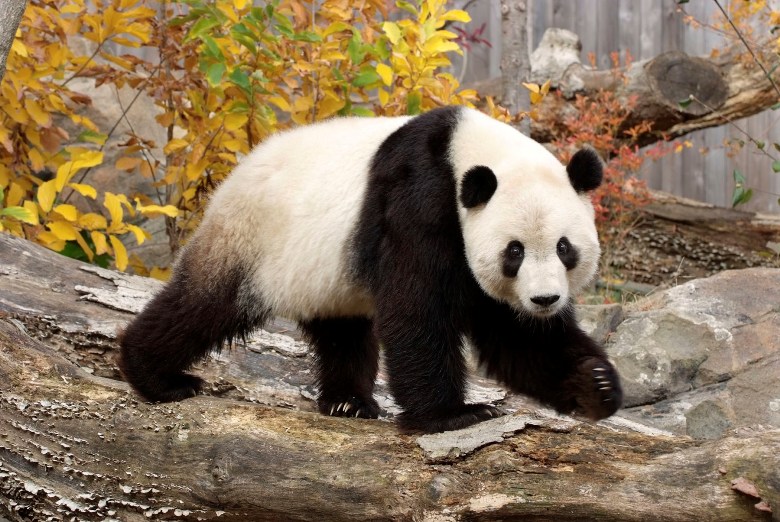 Giant Panda at the National Zoo

Who are we kidding? An African Safari isn’t in the cards this year. Neither is a trip to an exotic island where your gang can snorkel with every variety of tropical fish.

So, do the next best thing. Take the kids to a zoo or aquarium — or maybe 52 of them. That’s exactly what the Taviano family did. Traveling from their Columbus, Ohio home, they visited 52 zoos in 52 weeks (http://52zoos.com). “I dream of traveling the world,” wrote Marla Taviano, “but with three young kids and not a lot of money…. So I thought why not see some of the animals that are native to these foreign lands I want to visit. The animals are the real deal!”
It helps to have the kids read up on the animals before you go, she suggests, as long as it’s fun and doesn’t turn into something “completely boring and educational!” You’ll find plenty of fun facts at zoo and aquarium Websites too (link from www.aza.org — the Website for the Association of Zoos and Aquariums), as well as National Geographic Kids (www.kids.nationalgeographic.com).

Wherever you live — or wherever you are visiting — fall is a great time to visit zoos and aquariums because crowds are down and animals are more active due to cooler temperatures, says Allen Nyhuis, co-author of “America’s Best Zoos,” a family travel guide to the country’s best zoos (www.americasbestzoos.com).

And there’s plenty new to see, Nyhuis adds — everything from the Predators of the Serengeti at the Oregon Zoo (www.oregonzoo.com) to the Teton Trek at the Memphis Zoo (www.memphiszoo.org), which focuses on wildlife we’d see in our national parks to the San Diego Zoo’s Elephant Odyssey (www.sandiegozoo.org), the largest project in the zoo’s history. Here you’ll get the rare chance to see California Condors, which nearly went extent in the 20th century.

Chicago’s Shedd Aquarium (www.sheddaquarium.org) is opening a new Fantasea exhibit on Oct. 16 (have you ever seen penguins dance?) offering a new Polar Play Zone for young children. The Philadelphia Zoo (www.phillyzoo.org) — the nation’s first — offers a new McNeil Avian Center with more than 100 birds from around the world. (Ever see a rhinoceros hornbill?)

There’s also the chance to get up close and personal with the critters from the region you are visiting. Follow Otis the oriole’s first migration south at the Philadelphia Zoo or track the movements of the giant Pacific Octopus and San Francisco Bay sharks at San Francisco’s Aquarium of the Bay (www.AquariumoftheBay.org). At the New Balance Foundation Marine Mammal Center at Boston’s New England Aquarium (www.neaq.org), northern fur seals are the draw. (The hope is that these seals will encourage kids toward active lifestyles.) Or feel what it’s like to be the size of a bug at the award-winning New Orleans Audubon Insectarium (www.auduboninstitute.org).

See animals that were once indigenous to Colorado at Colorado Spring’s Cheyenne Mountain Zoo (www.cmzoo.org), the only mountain zoo in the country, visit those who call the desert home at the Arizona-Sonora Desert Museum in Tucson (www.desertmuseum.org) or check out endangered California creatures (bald eagles, desert tortoises, California Condors, among them) at the new California Trails exhibit at the Santa Barbara Zoo (www.sbzoo.org).

Did you know black-footed ferrets are the most endangered animals in the country? Check them out at the ZooAmerica North American Wildlife Park in Hershey, Pa., (www.zooamerica.com). ZooAmerica, which houses only North American species, will host special Creatures of the Night programs on the weekends during the month of October.

Visit a zoo in fall and, if you’re lucky, you’ll also get to see this summer’s crop of babies making their debuts — baby elephants at Albuquerque’s Rio Grande Zoo (www.bioparksociety.org/riograndezoo) and Salt Lake City, Utah’s Hogle Zoo (www.hoglezoo.org) or baby giraffes at the Houston Zoo (www.houstonzoo.org), says Shelley Miles of www.kids-list.com , where you can search for zoos and aquariums and also scores of Halloween events.

If you are a member of your local zoo or aquarium, you may be able to get in free elsewhere around the country, adds Steve Feldman, a spokesman for the Association of Zoos and Aquariums. And there are still 10 free zoos around the country, including the Lincoln Park Zoo in Chicago (www.lpzoo.org), the Saint Louis Zoo (www.stlzoo.org) and, of course, the Smithsonian National Zoo in Washington, D.C., (http://nationalzoo.si.edu) where the giant pandas are always a favorite.

Check for fall discounts, too. For example, every Friday night, admission is just $8 (instead of $29.95 for adults and $19.95 for kids) at The National Aquarium in Baltimore (www.aqua.org) for those entering after 5 p.m. (the aquarium is open until 9:30 p.m.). Here you can check out the new exhibit “Jellies Invasion: Oceans Out of Balance,” which features nine different jellies populations and explores the changing “balance of Earth’s aquatic ecosystems.”

Kids 12 and under are free the entire month of October at the San Diego Zoo and Wild Animal Park (kids’ admission is usually $26 at the zoo, $18.50 at the animal park) and, in November, prices will be reduced at the famous Indianapolis Zoo (www.indyzoo.com).

There’s a lot to be said about smaller (and cheaper) zoos too, as I recently learned firsthand with my young cousin Hannah Sitzman at the compact Central Park Zoo in New York (www.centralparkzoo.org).

Her mom and I were glad for the inexpensive admissions ($10 for adults, $5 for kids) because 4-year-old Hannah only lasted about an hour before she wanted to go play in the park (and who could blame her with 21 playgrounds and a carousel to choose from.)

She didn’t have the patience to wait for the zoo’s new pride and joy, the snow leopards, Chocolate and Zoe, to show their faces, though she loved the always-on-view penguins, the polar bears and sea lions and especially the Tisch Children’s Zoo where she could climb on the “spider web” play structure and jump across the “lily pads.” She skipped feeding the farm animals.

After all, there’s just so much talking you can do to the animals.