Getting Up-close and Personal with Olympians’ Parents 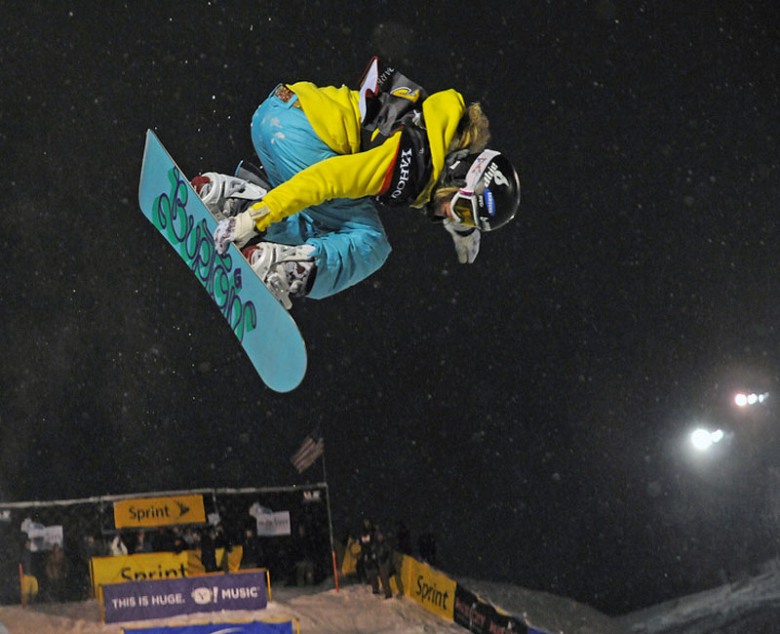 It’s cold, dark and the snow is dumping, but that doesn’t stop thousands of locals and their kids from turning out at Park City Mountain Resort (www.parkcitymountain.com ) to cheer on snowboarding superstars Shaun White and Hannah Teter, as well as other world-class athletes as they strut their stuff under the lights in their final competition before the 2010 Olympic U.S. snowboarding team was announced.

“It’s great for kids to see the best athletes in the world,” said Chris Daggett, a US Airways pilot whose daughters are budding ski racers on the local Park City team. “They really think it’s cool to watch.”

Little kids play in the snow and older ones are mesmerized by the action as they line the same half-pipe where the U.S. men’s team swept the competition in the 2002 Olympic Games, motivating kids all over the country to beg their parents to let them learn to snowboard. It was the first U.S. sweep since the men’s figure-skating team did it in 1956.

“Definitely worth freezing for and better than TV,” said a shivering 13-year-old Ashton Hammer who, along with his buddy Sebastian Vincent, snowboards every chance he gets.

But for champion Shaun White, there is just one special spectator that he wants to watch him land his brand-new trick, which by the way received a near-perfect score, but she can’t bear to watch. “It’s not about winning and losing,” White’s mom, Cathy White, said, keeping her back turned from the action until the applause and whistles from the crowd tell her he’s done. “It’s about his safety.”

In the coming weeks, of course, all eyes will be on Vancouver, B.C., (and yes, you can still find accommodations and tickets to some Olympic events, though not necessarily for the events you’ve always dreamt of seeing in person (www.vancouver2010.com , www.2010destinationplanner.com  and www.hellobc.com ). But here in Park City, Utah, with the Olympic crowds elsewhere, your kids can actually ski down an Olympic course, snowboard, ride a skeleton, maneuver a luge down the Olympic track (www.parkcityinfo.com ) or even take a Nordic ski-jumping class (www.olyparks.com ) — and you’ll snare a good deal in the process.

Wherever you take your kids to the snow this winter — and there have never been so many discounted opportunities for families (www.ski.com ), you’re bound to be frustrated by how much effort is required — on vacation no less — the mittens lost on the way to ski school, the preschooler who falls asleep on the chairlift and won’t wake up (that was my daughter Reggie), the chapped lips, runny noses and cold fingers, the broken snowboard laces, the ski boots that hurt.

Remember that these newly minted 2010 Olympians were once little kids whose parents faced all the same travails — and then some. “Taking kids to the mountains always requires a lot of work for parents,” acknowledges Pat Teter, whose sons are competitive snowboarders. His daughter, Hannah, already an Olympic gold medalist, was just named to this year’s Olympic snowboarding team. “At the beginning, I didn’t imagine they’d compete at such an elite level,” Teter acknowledges. “It was just such a fun thing for them to do and had the added benefit of them focusing on healthy lifestyles.”

Pat Teter’s suggestion to all of you budding snow mamas and papas (check out the new Website I’m helping edit, www.snowmamas.com ) out there: “If this is something your kids want to do, go for it and try it yourselves, too. It’s a lot of fun and anything we can do as a family is so important.”

“I couldn’t ask for more supportive parents,” Hannah Teter said after making the team. Her advice to parents of young snow sports lovers: “Be the most positive you can be and then let them go for it!”

For many here, just getting to this final night of the competition was victory enough. It certainly was for 17-year-old Broc Waring, according to his mom Heather. “This is a huge accomplishment,” she said. “Anything a kid is passionate about, you should back them up, whether it is the flute or snowboarding.”

Certainly there was a lot of schlepping involved — just like for any of us whose kids love snow sports — and inevitable injuries, offered New Jersey resident Lore Kass, who watched her son Danny — an Olympic silver medalist — compete in Park City, just after having recovered from a broken leg. (He didn’t make the Olympic team.) “You do what you have to do for your kids.”

That means being there to pick up the pieces when they’ve lost, just like at any soccer tournament or basketball game. “You just hope he comes out at the end walking,” said Heather Waring, who has crossed the ocean to watch her son compete.

It is always a family affair too, with aunts and uncles, cousins, siblings and friends on hand as a personal cheering section for the young athletes. Even an entire junior girls’ snowboarding team from Sun Valley, Idaho turned out to support Sun Valley’s Kaitlyn Farrington whose dad sported a T-shirt with Kaitlyn’s name on it. “The mountain is the best baby sitter you could have had,” he joked.

“Anything that gets the kids outside is a good thing,” added Earle Bidez, who watched his daughter Claire and son Dylan compete. “And they learn from every loss and disappointment. Something good comes out of it.”

The key: “The kids have to be having fun,” said Cathy White, whether they are hitting a half-pipe for the first time or a contest that will determine whether they make the Olympic team. “Parents too — on the slopes and off,” said Danny Kass’ dad Craig.

The local kids, meanwhile, were just happy to be out after dark with their friends, watching their idols and playing in the snow. In fact, Park City mom Caroline Kiley Silverman admitted that her 8-year-old son, Henry, might be a tad jaded by the hoopla. “We see Olympians in town every day,” she said. “It’s hard not to take it all for granted.”

(For more on Eileen’s trip to Park City, read her Travel Diaries here