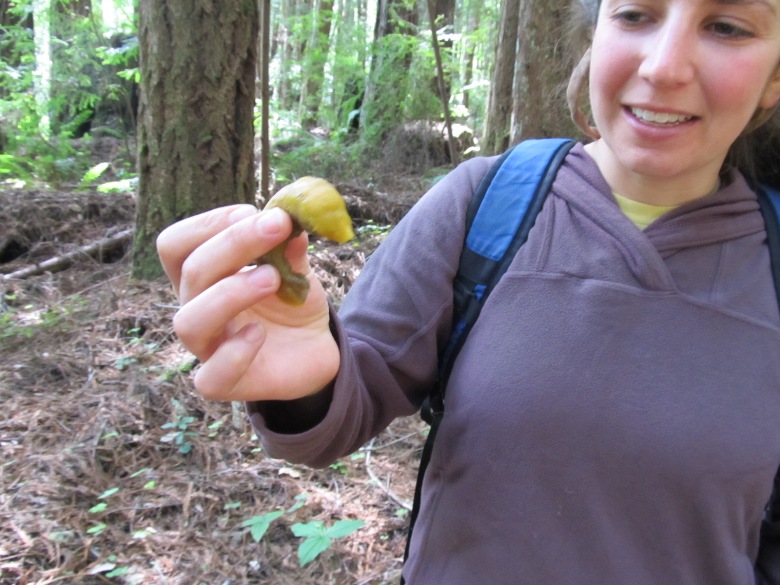 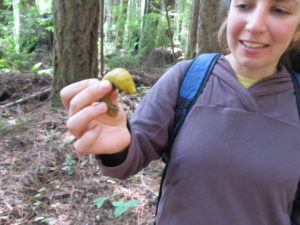 The Giant Redwoods, soaring hundreds of feet in the air, were amazing. But what was even better was the conversations with my daughter Reggie as we hiked through Butano State Park in the Santa Cruz Mountains. This is her turf—she works near here at Vida Verde, a nonprofit organization that provides environmental programs for inner city kids–and she knows the area well. But we don’t get to see her often and I’m glad for the opportunity to catch up. That we’re in such a beautiful spot is a bonus.

We were midway between Santa Cruz and Half Moon Bay,  where we are staying at the Ritz-Carlton Half Moon Bay  and only a little more than an hour from San Francisco .

Besides the giant redwoods, Butano is known for its bio-diversity (Butano is thought to be named after a drinking cup from a bull horn).  We walk past groves of Redwood “families” some with their innards carved out as the result of forest fires. We learn that Redwoods get about 30 per cent of their moisture from fog but as the climate warms, less fog threatens their survival. Butano State Park—one of the least known of the California parks—is home to a Redwood/Douglas Fir Forest.

We see plump yellow banana slugs, blooming Trillium a member of the lily family, and the tiny Calypso orchid during our five-mile hike.

We stop for a snack—courtesy of the Ritz which offers Club level guests the chance to pack “box lunches” from the bountiful breakfast offerings. (There are always cookies and penny candies too—perfect to take along on a hike)

I’d forgotten how much good conversation happens as you hike along without any distractions (no cell service here)!

There are the chances for all kinds of hikes here including the long Coastal walks (as I look out my hotel window, I see the crashing Pacific Ocean) we take the following morning.

There is camping at Butano State Park but I’m glad we can repair to the Ritz. After a shower, we head up to the Club Lounge for snacks and drinks. It is crowded with families—kids watching the wedding taking place in the courtyard below.

The Pastorinos live nearby but checked in over night with their two kids ages 11 and 16 for a special treat. “It is so easy,” said Dana Pastorino. “We don’t even have to go to a restaurant…We have something to eat, come back in a few hours for something else…and then desert… it is a huge treat!

“I can get what I want and I don’t have to wait,” added her 11-year-old brotherPeyton.  The best part, the two alleged, was no nagging from their parents to finish a restaurant meal. “And you don’t have to ask anyone for anything…you just go up and get it,” said Peyton.

We left the other families making dinner out of the bountiful offerings —everything from cheeses and crackers to seared scallops, salami, and more….to head to one of the area’s most popular restaurants Pasta Moon in Half Moon Bay, celebrating its 25th anniversary and known for its farm-to-table philosophy. The restaurant has made it a priority from the beginning to seek and serve what’s in season from local farmers and has been at the forefront of the farm-to-table movement.

We love the ambiance –the brightly painted walls, the guitarist is playing in the lounge.

Asparagus are in season and we are served them Misto — gently fried in a light batter. Yum!   The Bruschetta is made with local greens and sundried tomato pesto.  My husband has Ravioli Butternut Squash —all of pasta is house made— and my daughter Eggplant Parmesan with fresh mozzarella and basil.   I opt for the nightly pasta special with more local veggies.

We end with a house speciality butterscotch pudding.

Yum!  A terrific way to end a terrific day.

I love it when the conversation at dinner is as good as the food!