Gleneagles: Famous for golf but beloved by UK and US families 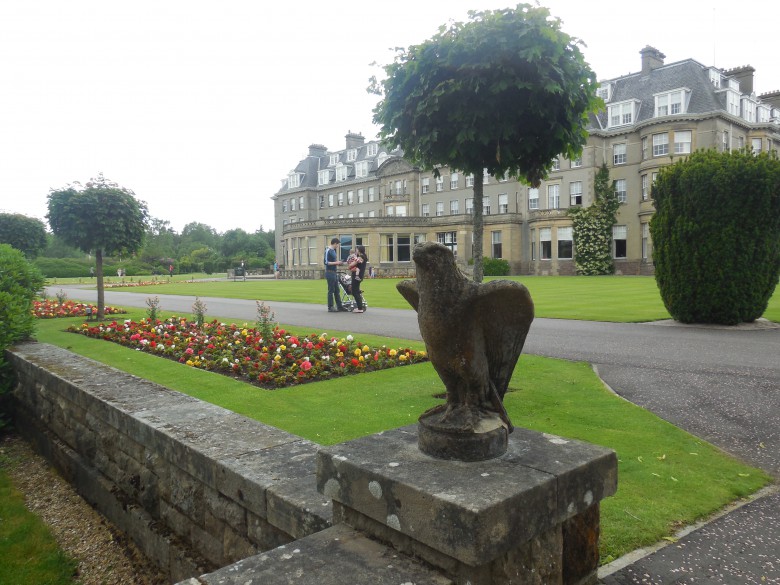 Better put on your seatbelt! You will be going up a steep stone path, through water-filled ditches, and woods on a dirt track, turning to avoid the trees.

No worries, she’ll have an instructor right beside her when she drives the eight wheel amphibious Argocat vehicle at the British School of Falconry at the Gleneagles Hotel in Scotland. Kids often are the best drivers, said instructor Duncan Eade. “Moms often are scared and dads drive too fast,” he explained.

Carly Martinson, 15, here with her family from near Philadelphia, said her 11 year-old brother Dodge was “the best driver in our family!” Maybe it was the Scottish air but it’s rare to hear a big sister compliment a little brother.

Of course Gleneagles is known for golf—it is home to three of Scotland’s best championship courses and where the 2014 Ryder Cup was played. When it was opened in June 1924, it was described as “a Riviera in the Highlands” with its own railway station a couple of minutes from the resort. The opening was such a big deal it was broadcast live on the BBC

With activities like learning the art of falconry or how to train a gun dog (a friendly Lab). There’s fly fishing and even four year-olds can take their turn off-road driving in a mini Land Rover on a kid’ sized obstacle course. There’s a maze. The Martinsons figure they’ll have plenty to do during the week here while Carly is off at a squash camp in Edinburgh.

Some families come for a weekend getaway, others for a special occasion, like the extended family I met celebrating the grandparents 50th anniversary.

There’s croquet and archery, air rifle lessons and, for teens, sporting clays at the shooting school. There is an Equestrian center (26 horses!), indoor and outdoor tennis, junior golf and a putting course, a complimentary kids’ club starting at age two and a massive indoor pool with a swim-to outdoor hot tub. Just the ticket on a rainy afternoon! There are lawn activities for families every Saturday afternoon.

There are 3 Eagles, 2 falcons and 20 Harris Hawks that always draw a crowd at the British School of Falconry; the 10 gun dogs are ready to be put through their paces, kids especially love the obstacle course where the dogs jump over fences and logs and other obstacles as they might if they were out on a hunt, explained Duncan Eade, one of the instructors. “The idea is to give everyone a hands-on experience,” he explains.

General Manager Paul Heery says the new owners intend to keep Gleneagle’s integrity and management–the resort opened 91 years ago–while continuing to make sure it satisfies 21st Century kids and their parents and grandparents. “Those kids are our future customers,” he said. And kids should be pampered on vacation just like the grownups—down to kid-sized slippers and robes. And the chance to put on chef’s hats and make their own pizza, handing it to the chef to bake in the wood-burning oven at Deseo, where there is plenty for the adults to choose as well at the Mediterranean inspired restaurant.

Along with 232 rooms, there are also 53 three bedroom houses that are time shares but ideal for families to rent. Anne Chrun and David Burton are from Washington DC and join their extended family at one of those houses for two weeks every summer. “We wouldn’t come all this way if it weren’t so special,” she added, stopping on a bike ride with the kids just before the pond where the swans were shepherding their ducklings. “The children play golf and get a lot better every year,” she said. The best part—at 10 and eight, she and her husband feel confident allowing them some freedom on the estate that is set on 850 acres. The staff, she says, watches out for them.

It’s easy to get here too—a little more than an hour on the train from Edinburgh or just five hours from London.

When Alan Hill first came to work here in 1989, he said, the resort was for golfers and “very, very stuffy… attracting an older crowd.”

Now, the average age of guests is in their 30s and 40s with kids in tow, said Hill, the director of food and beverage. “We’ve had to adapt,” he said.

Olivia Charman, 14, has been spending a week here every summer since she was nine, her family traveling from Atlanta. “I like all the different things you can’t do at home—falconry and being with the gun dogs and the air rifles,” Olivia said.

“The hardest thing when we find a place we love is to go somewhere else,” said Olivia’s mom Lorraine.

They’ve gotten to know families who come every year, just as they do, said John Charman, who is British, suggesting Scotland was a particularly good place to spend the Fourth of July.

You might get to learn how to groom and tack a pony or get a “behind the scenes” stable tour, learn to play “Rounders” similar to baseball or touch Rugby through the family and the kids’ programs.

Parents “can escape for a coffee,” said David Hutcheon, who was dropping his three young daughters off at the kids club for two hours of supervised and complimentary play in one of the nicest kids clubs I’ve seen everywhere; one little girl was “cooking” at the pretend restaurant—complete with “money” ; another was wheeling a baby buggy. There were dinosaurs lined up along the window and a whole rack of dress up as well as big comfy couches to take a rest. Those with kids under two are invited to come with their parents—there are plenty of toys for those travelers as well.

In the Strathearn dining room there were kids at nearly every table. The Templetons were here for a weekend a getaway just 50 miles away with their two young children “Amazing for kids,” Kristy Templeton said with five year old Rosie piping in that her favorites are the “big swimming pool and the pancakes for breakfast.” Her mom laughed that Rosie had been looking forward to those pancakes all week.

Dodge Martinson, from near Philadelphia, especially liked the air rifles—something he couldn’t do at a resort at home, he said.

“The perfect vacation,” said Anne Churn. “Lots of physical activity–the kids especially like the golfing—and then the big pool to relax in the afternoon

“Exactly what a holiday should be!”