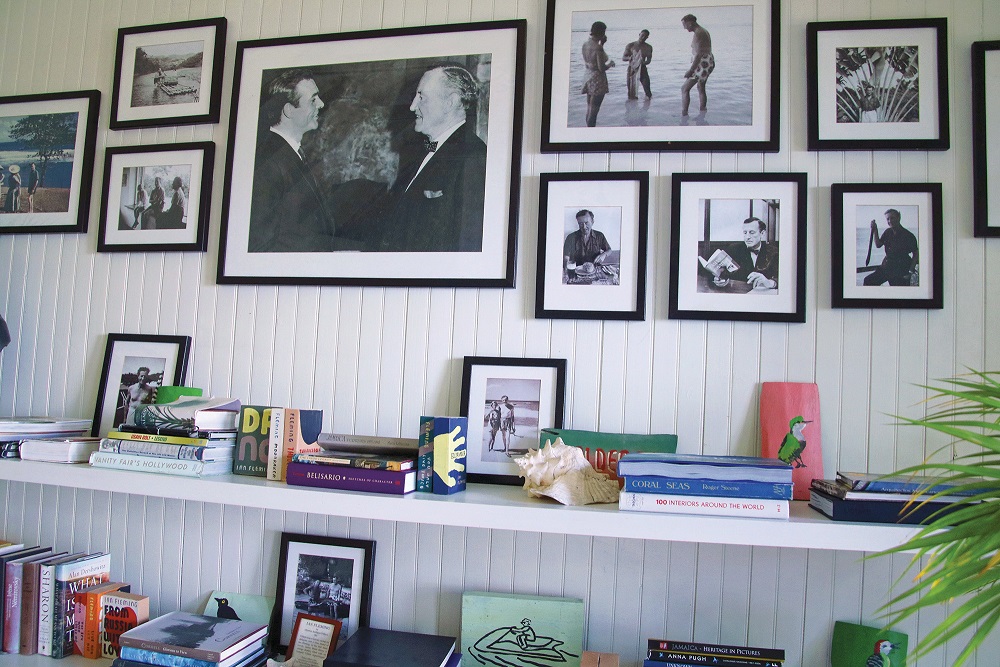 Not a person, a place. Have you ever been somewhere that makes you consider upending your life to move there?

Ian Fleming not only thought about it he did upend his life and move to Jamaica after World War II. He was a British intelligence analyst visiting Jamaica for a wartime conference when he fell hard for the island — the turquoise water, lush tropical plants and flowers, the friendly people. He promised himself after the war he would return — for good.

Jamaica proved to be Fleming’s muse as he created his alter ego James Bond at a villa he built off Oracabessa Bay not far from Ocho Rios. Fleming wrote every one of his 14 James Bond novels here, taking the name of an English ornithologist for his hero. He named his home GoldenEye in tribute to a mission he had been part of codenamed Goldeneye.

“No Time to Die,” the 25th film in the James Bond series and the fifth and final to star Daniel Craig, has been released, making us all wonder — and marvel at the world Ian Fleming created while living as far away as possible from the glitzy locales his fictional British Secret Service agent frequents, always courting danger.

Today, people rent the Fleming Villa (it sleeps 10) where Fleming lived and wrote his books — it is part of the GoldenEye Resort, 20 minutes east of Ocho Rios and about 2 hours (by car) from Montego Bay with its own private beach, pool, gardens and media room along with butler, housekeeper and cook.

The resort, a collection of 40 villas, cottages and beach huts spread across 52 acres, has proved a muse to others as well. Sting wrote the hit “Every Breath You Take” and Bono wrote the theme song to the GoldenEye movie here. Bob Marley, though, famously thought the resort was too fancy. (GoldenEye’s special offers can be viewed here.

Chris Blackwell, now in his 80s, bought the GoldenEye property in the ’70s and as more friends began to visit, he began to build the resort, starting with a beach hut for himself, one for his mom, and then some villas — all enclosed in tropical trees.

Blackwell knew Fleming. He too was born in Britain but raised in Jamaica and ultimately was the person most responsible for turning the world onto reggae music, according to the Rock and Roll Hall of Fame. He formed Island Records when he was just 22, helping to forge the careers of Bob Marley, Grace Jones and U2, among many others. He was also a successful film executive responsible for Oscar-winning movies. At the age of 72, he introduced his own brand of rum, Blackwell Black Gold, which each guest is given upon arrival.

Blackwell later created Island Outpost to market a group of elite unique Jamaica resorts, including Strawberry Hill in the Blue Mountains, The Caves in Negril, as well as GoldenEye, which continues to draw fans more than 50 years after Fleming’s death.

“I’m a huge James Bond fan,” said Nesa Nourmohammadi, here with her sister from North Carolina. “I’m not usually a sitting on the beach person but I’m really enjoying myself … we don’t have a plan, we’re just letting things happen,” she said.

Certainly, this is a place to do exactly that, especially when you are seeking somewhere to treat yourself and your family after being stuck at home for so long.

There are attractions nearby like the famous Dunn’s River Falls that you can climb; river tubing, horseback riding in the ocean; snorkel and diving trips, roadside places for Jerk chicken and fish, you may find yourself too comfortable to leave.

“I love everything here,” said George Grillo, here with his wife Michele and some friends from Maryland — he and his wife for the third time. “The staff is awesome, the food is delicious. It’s a little pricey, but you get what you pay for.”

“We came for the first time and fell in love with it,” said Michele Grillo.

There are COVID-19 protocols, as there are everywhere these days; You must get a travel authorization from Jamaica and present that as well as a negative COVID-19 test within three days of your travel to board your flight, even if you are fully vaccinated. You also will need to present another negative test before boarding a flight back to the U.S. The Centers for Disease Control and Prevention, meanwhile, has lowered Jamaica to a level 3 designation, meaning there are fewer cases. Ministry of Tourism, Hon. Edmund Bartlett noted that the infection rate within the “resilient corridors” is under 1 percent; Resilient corridors, which cover more than 85 percent of the island’s tourism product, is regulated by extensive protocols for Jamaica’s tourism sector.

Those we met thought the hoops were well worth it for the experience.

Blackwell designed the resort the way he wanted to live. Our beach hut had louvered windows, a pointed ceiling, a private veranda and the Snorkeler’s Lagoon on one side, Button Beach on the other. There are hidden coves everywhere it seems with beach lounges.

After our snorkel one morning — right from the beach to the reef — we enjoyed lunch (coconut water in a coconut) with grilled shrimp, jerk chicken, plantains, and sweet potato fries. One night we ordered takeout from a local spot in town.

This is a place, however, where older kids make their own fun and most times you will be responsible for the younger ones. (Bring your teen niece or nephew to help!)

“It’s so great and casual,” said Ella Meredith-Jones, 17, here from New York with her mom and younger twin siblings, Casper and Mirabelle.

“And the paddleboarding and snorkeling were great,” said Casper Meredith-Jones.

Their mom, Angela Meredith-Jones, said they had first planned to come in 2020 and were glad they finally made it. She especially loves the local dishes – ackee and salted cod for breakfast, for example, or freshly caught fish or jerk chicken served up with coconut rice.

“For some kids it might be boring,” said Ella Meredith-Jones. “But for us it’s perfect.”