Great job at Disney World, Mr. President, but next time take the kids! 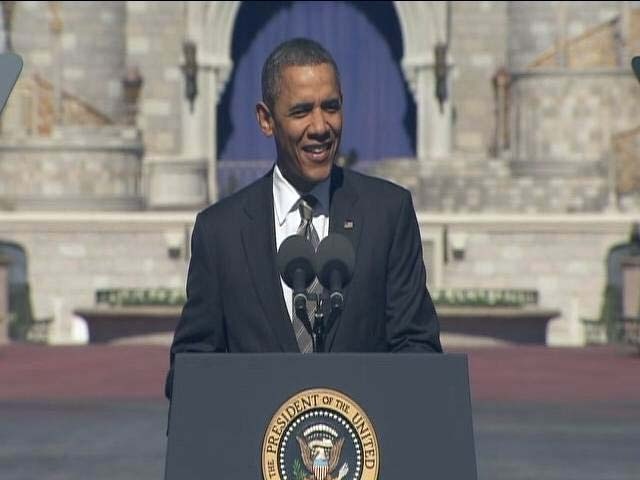 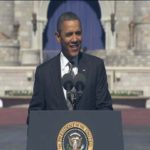 I wonder how first daughters Sasha and Malia feel about this?

President Obama went to Walt Disney World last week to announce some measures he is taking to boost tourism in the United States.  This is a great initiative, given that Americans have been boosting tourism in many, many countries for many, many decades.  Now, when our economy could use the boost, it’s time we made it as easy as possible for tourists from emerging markets, like Brazil, India and China, to come visit the USA.

Still, I wonder how his daughters felt seeing him making a speech in the Magic Kingdom, with Cinderella’s Castle as the backdrop?  He was only there for a short visit.  And it was a business trip after all.  How often have kids heard that when parents head somewhere they’ve been pining to go?  “Take me please dad?”

But Orlando?  I honestly don’t know if the first daughters have been to Disney World.  But even if they have I’m sure they’d want to go back.  My kids never missed an opportunity to return.  And I’m sure they wouldn’t want to be there just a few hours.

Likely there will be other chances this year. The Chicago Tribune reports this is just the first of what are sure to be many election-year visits to Florida for Obama. The president carried Florida in 2008, but he faces a much tougher fight in 2012 amid a state unemployment rate that remains above the national average.

Certainly anything President Obama can do to encourage tourism is a good thing, especially in Florida where so many jobs directly and indirectly depend on it.  The tourism industry had been urging Congress and the President to initiate visa reform to make it easier for visitors from emerging nations to visit.  The President should be applauded for taking executive action to initiate these visa reforms, which should lead to more jobs in the United States.

In Brazil, Orlando-loving families have to appear personally at only four consulate offices in the entire country, the Chicago Tribune says, for required interviews simply to get a visa to visit the USA. That means many families would have to travel several hundred miles before they can even plan their trip. It’s enough to make them give up or go elsewhere!

The Tribune also reported that a recent Congressional appropriations bill gave the Secretary of State the authority to develop a pilot program to use videoconferencing to conduct remote visa interviews for leisure and business visitors.  That certainly seems like a good thing.

These policy changes are the latest efforts by the Obama administration to get around gridlock in Congress through executive actions, the Tribune points out. In this economy, anything we can do to encourage tourism which means more jobs and more dollars in our cities is a good thing.  However we get it done.

Meanwhile, I’ve got some advice for the President parent-to-parent. I know he can’t bring the kids back presents from every business trip, but I would make that a priority from Orlando.  And next time, Mr. President, TAKE THE KIDS!