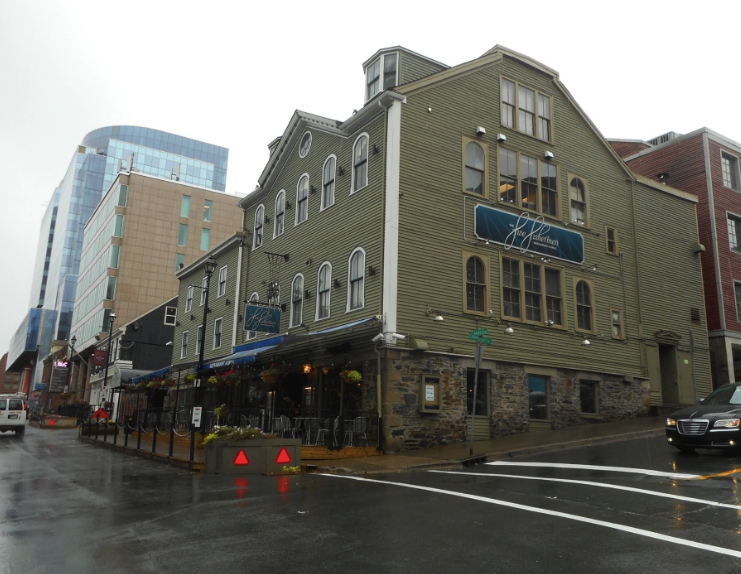 HALIFAX, Nova Scotia (Day 3) — More than 1,000 people came to the toddler’s funeral. But no one knew who he was until nearly 100 years later.

He was Body #4 plucked from the icy water 700 miles northeast of Halifax by the crew of the Mackay-Bennett, sent out to recover bodies after the Titanic sank on April 15,1912.

The little blonde haired boy, dressed in a grey coat, brown dress and petticoat, as was custom at the time, was the only child who died whose body was recovered. The crew paid for the “Unknown Child” headstone.

Everyone of course knows the story of the Titanic but few know the role this Nova Scotia city played in the Titanic disaster. Nor are they likely to have heard about the the Halifax Explosion five years later — caused by the collision between a World War I munitions ship and a hospital ship in the harbor. It caused the largest manmade explosion until the Atomic Bomb, killing 2000, injuring 10,000 and blinding 300 by flying glass.

There was more death and destruction in the Explosion than in the Titanic sinking, noted our guide, retired teacher David Cunningham, but few outside of Canada even know the story. Heroism too — a dispatcher who was killed in the blast stood by his wireless to save a train loaded with 700 passengers from entering the city.

In the public cemetery, Cunningham points out the grave of J. Dawson, where the sod must be replaced annually because so many visit. But the man buried there isn’t Jack Dawson, so famously played by Leonardo de Caprio in his star-making role. The man buried here was James Dawson, a 23 year-old native of Ireland who was hired on the Titanic as a coal trim, to move coal from the storage area to those who manned the furnaces. Jack Dawson was a work of fiction in the 1997 movie Titanic. Also buried here is Ama Paulson, a Swedish emigrant found with a harmonica in her pocket who played it to calm her four children as the ship was sinking.

The toddler was buried as “Unknown Child.” Only 705 passengers survived, mostly women and children as men were not permitted to enter lifeboats, picked up by the Carparthia and taken to New York. More than 1500 died in the North Atlantic.

The Mackay-Bennett ultimately found more than 300 victims, including the child and millionaire John Jacob Astor and Isadore Strauss, the founder of Macys who died along with his wife Ida. The toddler still had his shoes on but no life jacket.The crew paid for his coffin and his funeral. Those whose families could afford it returned their loved ones bodies home to be buried; relatives came from around the world to identify the bodies.Many too were buried at sea.

The baby was buried along with some 120 other victims in the Fairview Cemetery in Halifax—stones placed in the shape of a ship’s bow. Some 40 of the passengers have not been identified to this day and are just noted by their number. Others have stones either erected by the White Star Line or their families, including John Law Hume, one of the musicians who continued to play until the ship sank. He was in his mid 20s; Reginald Fenton, 25 “butler.” Ten other victims are buried in the Baron de Hirsch Jewish Cemetery and nineteen others at the Mount Olivet Catholic Cemetery.

The baby wasn’t identified until the grandson of a police officer who had kept his baby shoes — he couldn’t bear to burn them with other victims’ clothing — turned them over to authorities who deduced he was British based on the shoes’ make. Later DNA testing of his remains determined he was in fact Sidney Leslie Goodwin, who was 19 months old when he perished. Today, people believe his grave represents all of the children who died.

Two “Titanic Orphans,” young French boys traveling with their father under assumed names were reunited with their mother after their pictures were published in newspapers around the world. They were among the last to be put in lifeboats —their father, Michel Navratil, who had abducted his children in a custody fight and was mistakenly thought to be Jewish because he was traveling as Louis M. Hoffman. Of course every grave—every passenger lost at sea—has left behind a story.

Today Halifax is a bustling city of 400,000, the capitol of the province of Nova Scotia. We toured a beautiful public garden in the center of the city as well an historic fortress — The Citadel — overlooking the harbor. Though many ships and troops came through this port during the two world wars, no fighting ever occurred here.

Home to six universities, Halifax is said to have more bars and pubs per capita than any other Canadian city—including the new Halifax Distilling Co, one of just a few that are owned by women. It is also a growing cruise port—we are spending the day courtesy of the Norwegian Gem.

As many as 300,000 cruise passengers a year visit Halifax, especially in late summer and fall, with their numbers growing each year. As is true on most places you might visit on a cruise ship, a day doesn’t give this area justice—the wineries an hour away, the picturesque fishing villages (Peggy’s Cove seems to be the one cruise passengers visit), the abundant seafood—including The Five Fisherman restaurant, which in its history was a school founded by Anna Leonowens, known as the teacher whose story teaching the King of Siam’s children became The King And I. Eventually her school became the Nova Scotia College of Art and Design.

There is a Titanic and Halifax Explosion connection at this restaurant too. For many years, this building was a funeral home, John Snow & Sons, where Titanic’s wealthy victims were taken. It also served as a mortuary for victims of the Explosion.

Today, the restaurant in the trendy downtown bar and restaurant district on Argyle Street is said to be haunted by some of the spirits—glass flying off shelves, a fog like apparition walking the stairs, cold air pockets… voices. “It’s said to be one of the most haunted buildings in Canada,” cheerily says managing partner Wallace Fraser.

Halifax has long been an important port where navy vessels left to fight in World War 1 and 2, including the convoys sent to supply England in the face of German submarine attacks. That maritime history is excellently shown at the Maritime Museum of the Atlantic, which has one of Canada’s largest collections of marine artifacts in the country, including those from the Titanic and the Halifax Explosion. Nova Scotia waters are home to the remains of more than 10,000 wrecks.

But none are more famous than the Titanic. We can’t stop looking at the century-old baby shoes at the Maritime Museum of the Atlantic. They belonged to little Sidney Goodwin.