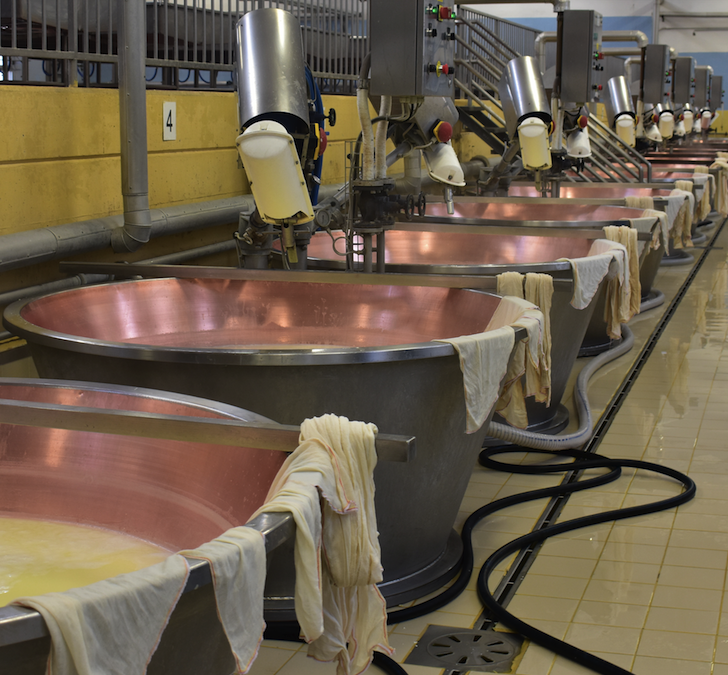 PARMA, ITALY (LAST DAY IN ITALY) — The drummer has arrived!

The cheese master takes a small hammer to the big wheel of cheese. 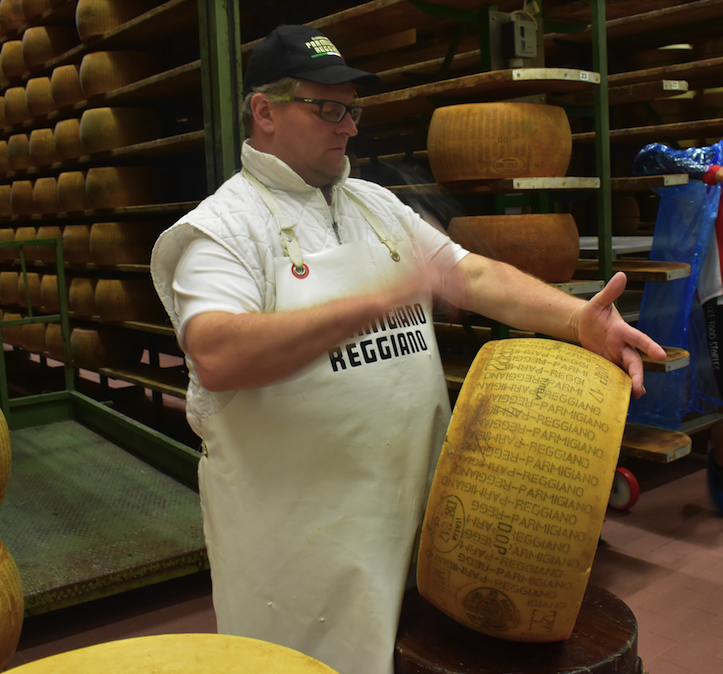 Cheese master at work in Parma

No, this isn’t a novel way to drum—or to cut cheese. This cheese maker at a small factory (Consorzio Produttori Latte Baganzolino) in Parma, Italy is testing a giant 80-pound round of this region’s famous Parmigiano Reggiano cheese to make sure it is solid, that there are no breaks or air pockets inside the cheese.

These big wheels of cheese are stacked on shelves from floor to ceiling—thousands of them, being aged for at least a year and as long as three years. 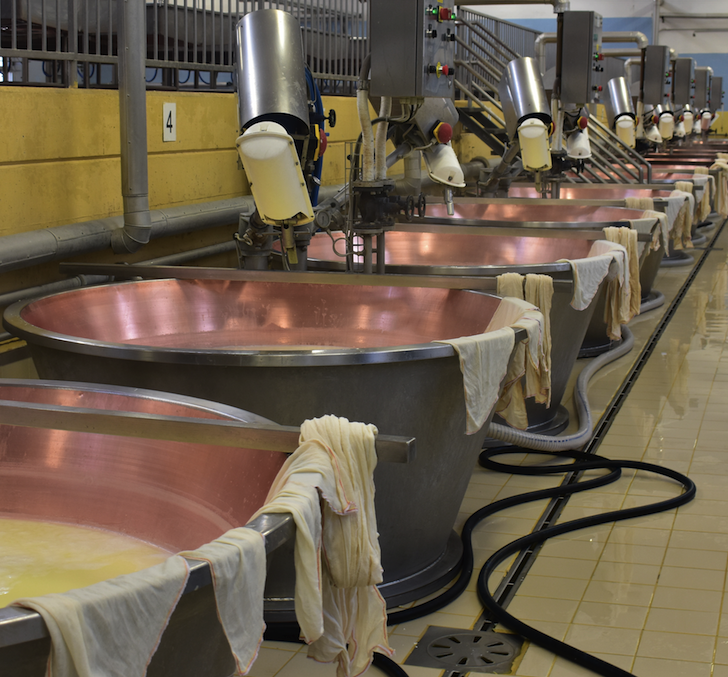 The production starts with 15 vats of fresh milk

The process of making this cheese goes on daily at this factory — weekends, holidays, even Christmas. It starts with two daily deliveries of milk from some seven local dairy farmers who feed their cows a special diet of natural grains for this world-famous cheese.

That is because the cows must be milked twice a day and this cheese made with fresh milk, explains our Tours by Locals guide Giulia Marinelli. 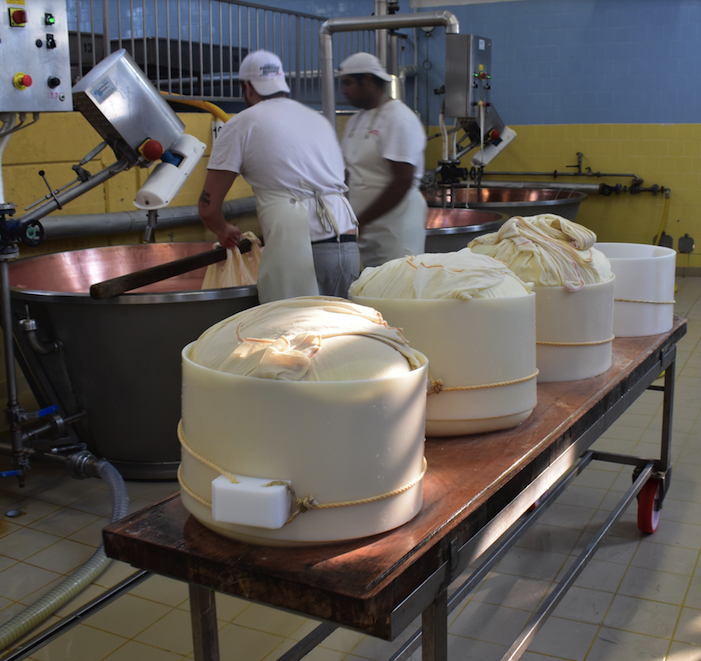 Very moist cheese is taken from milk and put into molding cartons. The remaining milk and whey is used in raising hogs and making ricotta cheese

This region of northern Italy, Emilia-Romagna, extends from the Apennine Mountains to the Po River and is especially famous for its food and food industry. Parma ham and Parmigiano Reggiano cheese are made in and around Parma. American baloney takes its name from the mild Mortadella sausage made and eaten widely in Bologna, Italy. Nearby Modena is synonymous with the production of Balsamic Vinegar. And of course there is the famous Bolognese meat sauce that everyone here calls Ragu. 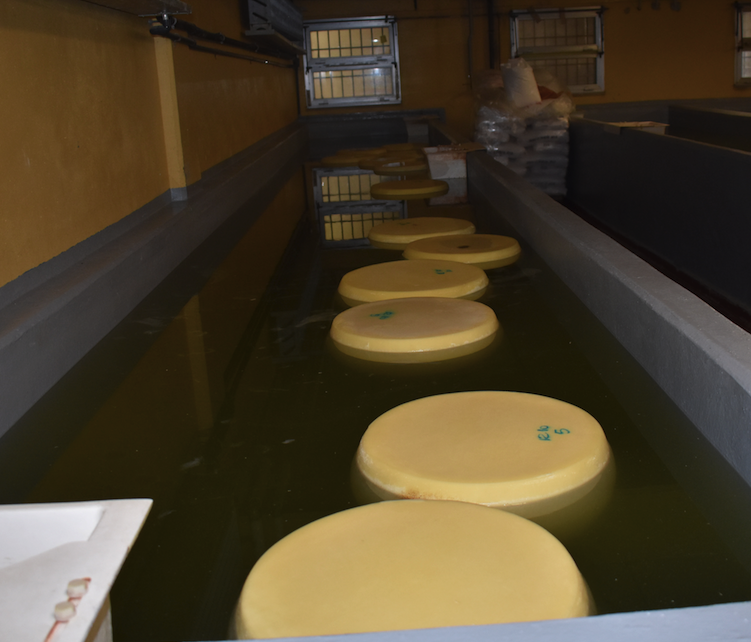 Of course we’ve seen the famous sites of Bologna, the porticos that stretch for many miles, the Basilica di San Petronio, one of Europe’s largest with its arresting fresco of Heaven and Hell; the University of Bologna, dating back to 1088 and the oldest university in the world. Visitors find the Anatomical Theater irresistible —where during the seventeenth and 18thcentury, students, professors and the well heeled would gather for hours for the “show” of seeing a seeing a dissected body.

Our Tours by Local Guide in Bologna, Micol Mazzeo, is the mother of five year-old twins and often a guide for visiting families. She says that kids especially like the statue in the Anatomical Theater of Gasparo Tagliacozzi holding a nose in his hand (he was the first to attempt reconstructive plastic surgery, Mazzeo explained, on men whose noses had been sliced off in a duel. The “Spellati” (skinned men) are also a big draw.

But for kids, as well as for us, I admit, the biggest draw here is the food. Mazzeo takes us to the famous Quadrilatero area, now the historical center of the city where the markets date back to medieval times. There are shops selling just pasta, just chocolate; fish, meat—one selling horse meat; the hanging Parma hams and huge rounds of the Parmigiano Reggiano cheese.

The market is especially busy on a Saturday and also lively on Sunday when typically shops in Italy are closed. “That is because Bologna is increasingly popular with tourists,” explains Giulia Marinelli, who shows us where those huge hams and wheels of cheese come from.

In Modena, we visit a just opened Acetaia Giusti visitor center and tasting room for the family owned company that dates back to 1605. It is amazing to taste the differences between balsamic vinegar that has only been aged a few years as compared to eight years, 12 years and even 25 years.  In this region, explains the company guide Mariangela Diana, a new cask of balsamic vinegar would be started for a new baby; for a dowry. It’s called “black gold,” here and is traced back to the 11thCentury—the transformation of cooked grapes that are left to age in wooden casks. “All you need are the grapes, time and patience,” she said, with the most aged the thickest and sweetest.

If only I had an extra suitcase! If only we were allowed to bring Parma ham and cheese into the United States! 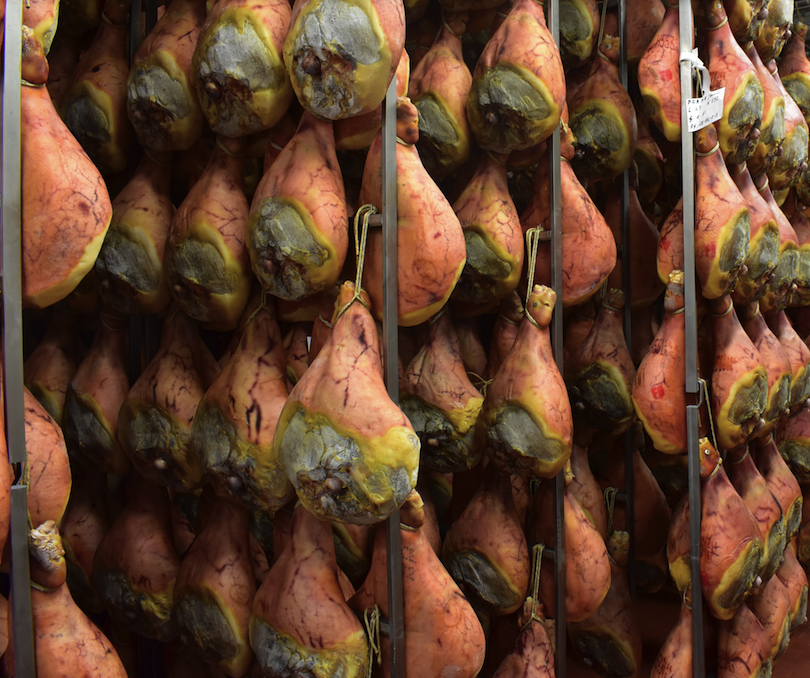 Parma hams being cured in the countryside

As Marinelli takes us through the process to create the cheese and then later, out in the countryside south of Parma to visit the Salumificio Conti, run by the women of the Conti family, she explains that these are small providers who don’t export to the United States. Only a handful allow visitors and you must book ahead with a guide like Marinelli.

Vegetarians likely would want to skip the tour of the Conti ham factory but it’s fascinating for the rest of us. Here, since ancient times, we learn, pigs have been bred with cereals and whey produced by the production of Parmigiano-Reggiano cheese. We saw that whey this morning as we watched the cheese makers start the cheese making process by lifting big balls of soft cheese from the vats of milk, leaving the whey to be pumped out for those pigs. 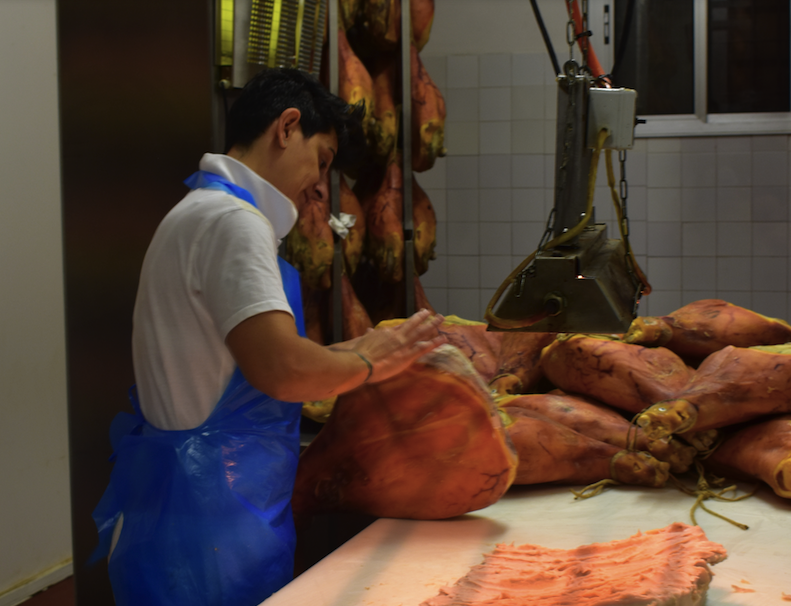 Again, this is a long, labor intensive process—salting the hams twice within a week, washing them, covering the hardened skin around the bones with a special paste made of fat, salt, rice flour and  pepper–the same woman has been doing this essential job here for nearly 30 years.

The paste keeps the ham from drying but permits the exchange of air and humidity essential to the ham here. On the hills outside Parma in Langhirano, where we are, there is a perfect microclimate for the production of this ham — during sunny days, just as in ancient times, windows are opened so the air, the owners say, can “caress” the hams.

As in the cheese factory, there are thousands of hams here—they come from the back legs of these special pigs—in different stages of their production. Those that have been aged 30-32 months are the best, our guide suggests.  She points out all the special seals that like on the cheese tell you this is an authentic product approved by inspectors for meeting certain standards—from the way the  pigs are fed to their age when they are slaughtered (typically nine months to a year) their weight….

Of course we end the tour with a tasting.

The end result: Sweet and Tender. Melts in your mouth good, just as the producers intended.

But not enough! Perhaps more for dinner!