Hawaiian tradition and culture blend with Disney at the new Aulani 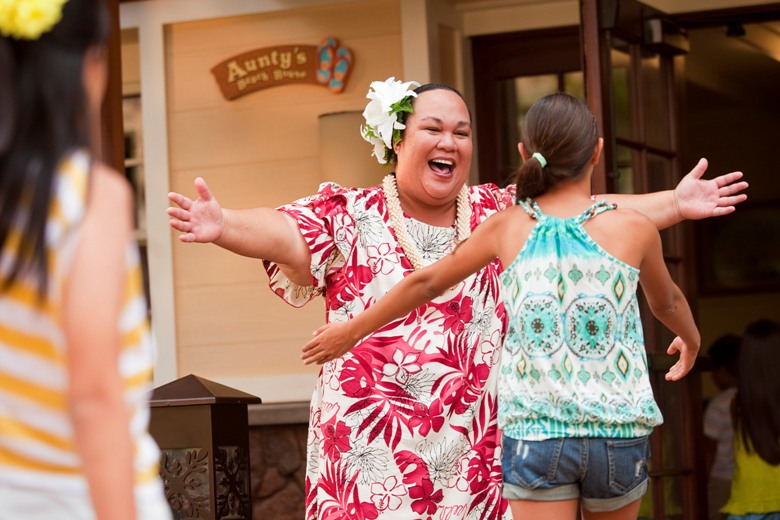 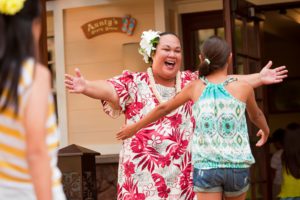 DAY TWO (of 6) – Ready to learn the Coconut Walk? “Aunty,” who actually is well known Hawaiian entertainer Sonya Mendez, leads the children as they clap Coconut shell instruments together around the outdoor restaurant. In between songs, Goofy, Minnie and other Disney Pals—all decked out in Hawaiian gear—stop by for photos and hugs here at Disney’s new Aulani Resort on Oahu.  “This is a place where children will leave with a sense of place,” she says.

This is also a resort where parents and grandparents might actually get time for themselves, , especially since the children’s center Aunty’s  Beach House is complimentary.   “That’s amazing,” said Kerry McNaull, whose nine-year-old daughter Grace happily spent the evening at Aunty’s while her parents celebrated their anniversary with an adult dinner.

Djuan Rivers, the vice president of Aulani, adds that the intent  is to  make more of those wow — I can’t –believe-we’re doing this — vacation moments happen, whether it is for a family together, for mom at the spa, dad surfing or each child individually.

Each day, like on a cruise ship, there will be 20+ mostly complimentary activities pulled from a roster of 40…that families can pick and choose — making Space Goo with Stitch, feeding the fish in the Rainbow Reef lagoon, XBOX Yoga for teens, a Hawaiian craft, pool games, a movie in Uncle’s study at Aunty’s Beach House, where it “magically” begins raining and thundering even when the sun is shining outside or a family movie under the stars.

(You can have Aulani and your cruise too: Next year, Disney Cruise Line will offer for the first time two special voyages to Hawaii from Los Angeles, including excursions to Aulani while on Oahu.)

Aunty’s Beach House is designed like a comfortable Hawaiian bungalow—complete with old pictures, a ukulele and accordion on the shelf and ultra modern touches like touch-screen kid-sized tables for games, a first rate playground area outside (complete with surfboards piled alongside the fence) computer games, move theater and Aunty and Uncle (in Hawaii, children routinely call adults Aunty and Uncle) to share stories.  This being Disney, there is an extensive dress up area and “uncle’s garage” for crafts.

The activities are not only free but thoughtful. “ Disney has allowed us to express these stories as we have our entire lives and share them with visitors on a larger stage,” says  Kealoah Kelekolio one of the Aulani’s three storytelling Uncles who also tells Hawaiian stories at the Bishop Museum and at local schools. “It is nice to see they honor our culture.”

“The characters aren’t front and center,” says Disney Mom’s Panel member Beth Choisez. “You really have to look for that.”

Instead, what is front and center here is the story of Hawaii. More than 100 locals have been employed as various consultants, said Joe Rhode, the Senior Vice President and Creative Executive at Walt Disney Imagineering who is responsible for the creative design and content here.

In addition, every cast member—and there are more than 800, from the lifeguards to the wait staff to the house keepers –have been hired with the idea that they will share their own stories of growing up and living in Hawaii.

“We built this resort around the story of Hawaii,” said Rhode. It’s like a book about Hawaii and you are inside the story!”

That is a departure for Disney, which typically makes up its own stories, he continued. “Hawaii is full of 1,500 years of story… this  is a unique opportunity for all of our designers to place ourselves somewhat to the side and let our skills be used in the service of stories that are not our own invention, but the real stories of this place.”

“People expect from Disney is Magic,” said Rhode. “But you have to remember that Hawaii has its own magic and we don’t want to overwhelm the magic of this place so we’ve chosen to weave this very subtle layer of magic through the entire resort… Magic is everywhere…”