Heading off on an “un-cruise” in Southeast Alaska 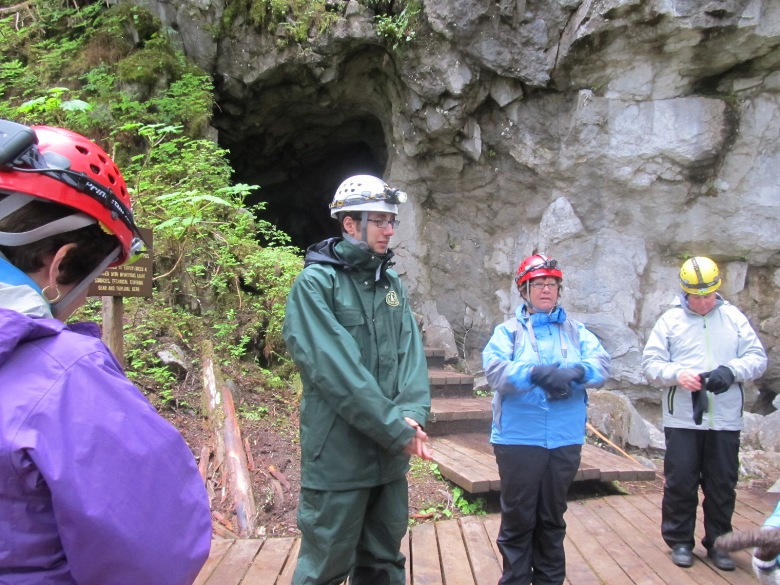 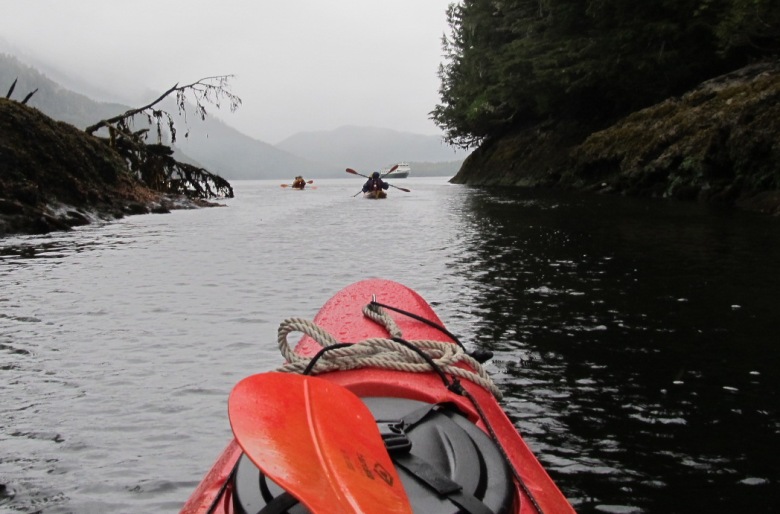 Kayaking near Dry Pass on the Inside Passage in Southeast Alaska

DAY ONE — Southeast Alaska, the Inside Passage

Liquid Sunshine. That’s what they call the rain in Southeast Alaska.   And we are enjoying plenty of it kayaking this morning outside of Dry Pass northwest of Ketchikan.

We boarded the Inner Sea Discoveries Wilderness Discoverer late yesterday oin a rare sunny afternoon in Ketchikan. Our 78-passenger ship with 26 crew looks like a baby next to the giant cruise ships anchored nearby.  We have just 64 guests this week, Captain Dano Quinn tells us, and everyone has a reason for coming.

Carol  Harrison, a 67 year-old grandmother from near Atlanta, has brought her 12 year-old grandson Miller Sinyard along with her son Todd and daughter-in-law Becky—Carol’s first “big” trip since she was widowed five years ago.  “I wanted to bring Miller to Alaska,” she explained. “I wanted him to not be too old to do a trip with me but old enough to do everything and I didn’t want the parties and the crowds of the big ship. That isn’t what this is about.”

The Levys, who are from Los Angeles, are here with both their daughters celebrating daughter Michelle’s graduation from medical school.  “I like unique vacations that create event-based memories,” said Dr. Howard Levy.  His wife Karen, who might prefer a few more creature comforts, is game.

We are traveling with extended family fulfilling a long-held dream of visiting the Alaska wilderness.

Our cabin is tiny with barely room to get around the bed. The bathroom is a combo unit for shower and toilet with just enough room to turn around in.  The food is plentiful, served buffet style, and there is an amiable bartender named Shaun.  But this trip isn’t about gourmet food or creature comforts. As my husband reminds me, this is about the wildlife.

This morning kayaking near the entrance to the Dry Pass, we see giant red sea stars, anemones and the biggest clams I’ve ever see – Gasper Clams (so-called because they squirt water out of their shells).  We learn make these clams make for great bear snacks. We don’t see any bears, though we do spy a Bald Eagle’s next and see several soaring overhead.

This is the antithesis of a large cruise—in fact the company’s motto is “the Un Cruise” and that is why everyone has chosen it for a special trip, paying considerably more than on a major cruise ship, though maybe not so much more when you figure in all of the excursions that would be extra costs on big ships are included in our adventure.

There are two couples celebrating anniversaries.  “We love outdoors stuff so that is why we are here,” said Jeanne Schwarz, celebrating her 75th birthday on a “girls trip” from Castle Rock, CO. with her daughter and granddaughter, Lenise Ruff, who in turn is celebrating her college graduation.

The small ship is conducive to getting to know fellow passengers.  By the second morning, people are sharing tables and stories of past adventures.

We have a choice of activities after breakfast — A trip to Alaska’s largest cave, kayaking with a guide, kayaking on our own (the boat has a ready dock which means kayaks can be launched straight from the back of the boat) … the chance for a long hike.   We opt to kayak in the morning and then visit the cave in the afternoon.  Unlike a big cruise ship, no activities have to be booked in advance. No activities cost extra. Nor do we have to leave the ship to go elsewhere to start the adventure.

The rain doesn’t stop us. But the wind nearly does.  Our guide Allison Ashton swiftly changes gears so that we manage to get inside a more protected area where we can explore the sea life. We see otters  pop up in the water.

FUN FACT: Otters float with a favorite rock on their bellies which they use to open clams.

We get back to the boat for lunch cold, wet and exhilarated. Hot chocolate is waiting.

After lunch (the just-made ginger cookies are hard to resist),I t is our turn to visit El Capitan cave.  But because this is an expedition ship, not all goes as planned. 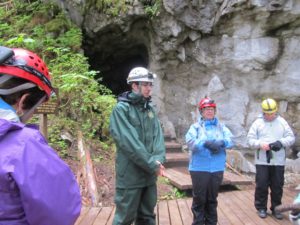 Getting the history of El Capitan cavern near Dry Pass

Because of gusty winds, the Captain is still waiting to get through the narrow passage—just 90 feet– so we must take an hour’s skiff ride in the rain to reach the cave.  Then we climb 367 steps up to the cave entrance on Prince of Wales Island, the third largest island in the USA after Hawaii and Katmai.

We learn a trail crew built these steps in 1994 in a month. More impressive is that one of our group, Kirsty Digger, a nursing professor, makes it up on crutches. She believes those with physical challenges like she has can see more of Alaska’s Wilderness from a small ship. She doesn’t mind that she can’t maneuver inside the cave.

Our Forest Service guide, Blasé LaSala says this is the only show cave in Alaska. We only go 800 feet inside—climbing over boulders, stooping to get around the rock. But 13,000 feet have been mapped, he tells us, much of it such a maze that even one of the expert mappers got lost.  Rather than stalactites and stalagmites, he takes us into a flowstone room where rock that looks like peanut butter stripes flows down the wall.  Some kids, he says, love it, others get scared “often because their parents are acting scared for their safety,” he said.  Those under seven aren’t permitted.

He tells us there is evidence that people were here over 3,000 years ago and   bear remains that date back 12,000 years.

Tours here are free, with more people discovering this place, though not a big cruise ship group in sight.

That’s the idea, of course.