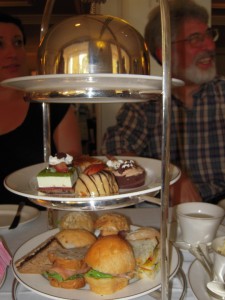 We caught a ferry right off King’s Wharf where our ship is docked (only a short 20-minute $4 ride) and then a short walk to the iconic pink Fairmont Hamilton Princess (www.fairmont.com) with its spectacular gardens overlooking the water and ponds stocked with Koi.  The hotel has long been a fixture here—it is, in fact, the oldest hotel on the island and is celebrating its 125th anniversary next year.

We learn it is the only place—and the place—for a traditional English Tea.  In the 1840s, Anna, the 7th Duchess of Bedford, wanted a snack for tea and thinly sliced bread and butter.  Her butler brought it to her in secret, but when she realized no one cared, she began to entertain her friends with tea—thus Tea became a tradition, typically served in the afternoon with small sandwiches, pastries, and scones with preserves and clotted cream.

At the Fairmont, most people are cozy on couches and overstuffed chairs overlooking the gardens. But since we’re 11—tea was the one desire of our 85-year old birthday girl while visiting Bermuda—that we are gathered at a long table where pots of different teas ( Berry Berry, Earl Grey, Peppermint, Chamomile, and another delectable brew with pineapple and lemon lime are served in dainty porceline cups.  But that was the least of it.  Three-foot high, tiered platters are in front of us with sandwiches (minted cucumber and chevre, asparagus and smoked salmon, grilled chicken and avocado, ham, roast beef, baby shrimp salad … are then followed by bite-sized pastries, one better than the other–pear almondine tart, mint squares, spiced rum chocolate tarts, white rum chocolate mousse cups, vanilla cream- some with rum, some just sweet. I can’t forget the best part, the apricot and fig scones with raspberry jam and clotted cream.  We can barely push ourselves away from the table.  Did I mention the grapefruit sorbet in a dark chocolate cup–all for $34 pp!

There is a special children’s tea menu with homemade PB and J, tuna salad, and cheese sandwiches.

Around us, I see a mom and two young children dressed in party clothes settling in for tea and other touring parents with a middle schooler who seems to be enjoying every delectable bite—the kids keeping an eye on the koi swimming just outside the windows. It all makes me wish for the time when people had two hours to linger and talk, laugh and gossip over tea in the afternoon.  Wouldn’t it be nice if we could do that—at least once in a while.

That’s what vacations are for, after all, to slow down, relax, and remind ourselves what is important. I think that watching the 85-year old matriarch of this family so proudly sitting at the head of the table reminiscing with her family about a trip to Bermuda many years ago (staying at this very hotel) with her husband, who has since died, and enjoying other high teas in London. We joke that the member of the family who recently died would have hated this tea–the formality, the food—and would have preferred the golf course, but the other guys in the group—are eating it up—literally.

It is easy to get from Hamilton to Dockyards where our ship is docked –just 25 minutes on a ferry but because we have seniors in the group and don’t want to rush, we opt for a more expensive taxi.

We get back with time to spare–stuffed and smiling.  Is it time for dinner already?