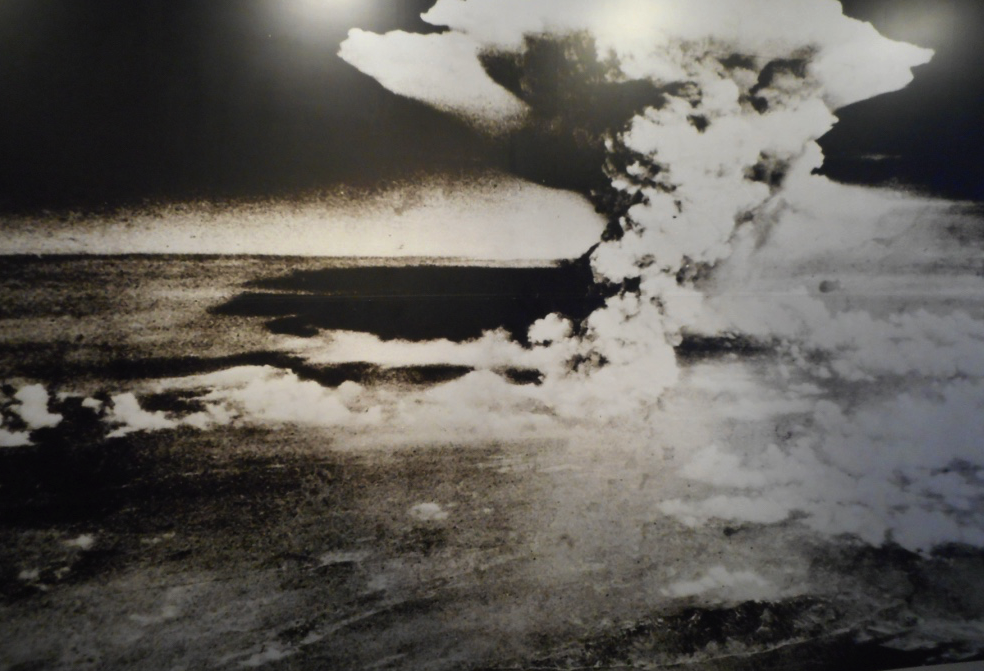 HIROSHIMA, Japan — Amber Whaley, 12, couldn’t live without her cell phone, wants a dog her mom won’t let her have and hates her school uniform. Anything with meat is her favorite food, she declares.

They do eat sushi and ramen but eat a lot more pork and rice. “Sushi is different here,” aid Amber.

But the two friends — as typical tweens as they may be — share a rare knowledge with their 400-plus schoolmates of just how devastating war and nuclear weapons can be.

The two attend the Honkawa Elementary School in the heart of Hiroshima. When the Atomic Bomb was dropped at 8:15 a.m on August 6, 1945, children were already at this school, which had opened in 1928. All but one of the 420 students and teachers perished. That one survivor, Kiko Amori, incidentally, is still alive and living in Yokahama, though she has been plagued by health problems and cancer.

Today there is a museum at the school to those children who perished and a small stone memorial outside put there by an anguished father.

This summer, of course, marked the 70th anniversary of the dropping of the first Atomic Bomb, which completely destroyed Hiroshima and killed over 140,000 people. More than 350,000 people were exposed to radiation. No one knows exactly how many survivors ultimately died from radiation-related cancers and other diseases.

Many who haven’t visited here don’t realize how many children were among the victims. A lot of middle school youngsters perished because they were in the heart of the city helping to clear fire lanes for the expected fire-bombings that had already hit other Japanese cities. In an eerie similarity to 9/11, their parents fruitlessly walked the rubble looking for children whose bodies were never recovered. The Hiroshima Peace Museum, which is undergoing renovation to make it more relevant to today’s young people, is full of reminders of their too-short lives — a pair of glasses or a sandal found in the rubble, recognized by a mother who had sewed the straps on the sandal from a kimono. There are tattered school uniforms worn by children terribly burned who died, school notebooks, and more. Heartbreaking all. Perhaps the most famous of the victims was Saduko Sasaki who was exposed to the bomb’s radiation at age 2 but had a healthy childhood until she developed leukemia at 12. While dying in the hospital, she folded tiny paper cranes, believing that a chain of 1000 could make her wish to recover come true.

She died but children around the world took up her cause and the Hiroshima Childrens Peace Monument was the result of donations from children. Today, just after the 70th anniversary, there are hundreds of origami crane chains brought by Japanese children who typically visit here either just before middle school or during middle school on school trips.

As powerful as that is, it can’t compare with going to the school where so many children died and ultimately were cremated right where the children’s playground is today. The museum is in the scarred cement basement that survived—one of the few buildings at that time that had been built of reinforced concrete. The building was used as a school until 1987. When the school was rebuilt, this was left as is to be a museum — and a memorial — and the school moved across the courtyard. Today it is a bustling busy elementary school full of adorable kids wearing navy and white uniforms. Of 205 older students who had sent to the countryside that April as had been customary for older children thought to be old enough to leave home for safety, the majority lost both their parents in the bombing.

“From the first grade, we are teaching our kids how to express peace in the world,” said their headmaster Kazunari Kono.

Students like Amber, who is half American and the daughter of a U.S. Marine, and   Miko, whose family has lived in Hiroshima for generations yet never talks about the aftermath of the bombing, are sometimes assigned to show visitors through the museum.

“It was so sad,” said Amber, who lived in Oceanside, CA until she was nine and speaks perfect English. “When I come to school, I wonder what it would have been like then.” The girls note that after the school reopened just after the war, the building was in terrible shape with children having to raise umbrellas when it rained. “We sat in broken classrooms on burnt bricks, but we had a fun time,” one former student’s memory was recorded. American children from All Saints Church in Washington DC sent marbles in 1947, which are on display, and the Japanese children in return sent drawings also on display.

“Kids in war wasn’t a good thing,” Amber explained as we walked through the cement basement museum that, because it was still standing after the bombing, became a place where many of the injured were treated and died.

This year, Miko said, many people have come to Hiroshima from all over the world. “It is good to remember and to think about peace,” she said. “Today Hiroshima represents peace and we don’t want what happened here to happen again.”

Tourism officials say too many people still think of Hiroshima as dangerous or destroyed but it is a vibrant city of more than a million people full of families, business, and green spaces that some thought would never grow again.

“Everyone wishes for peace,” Amber said.