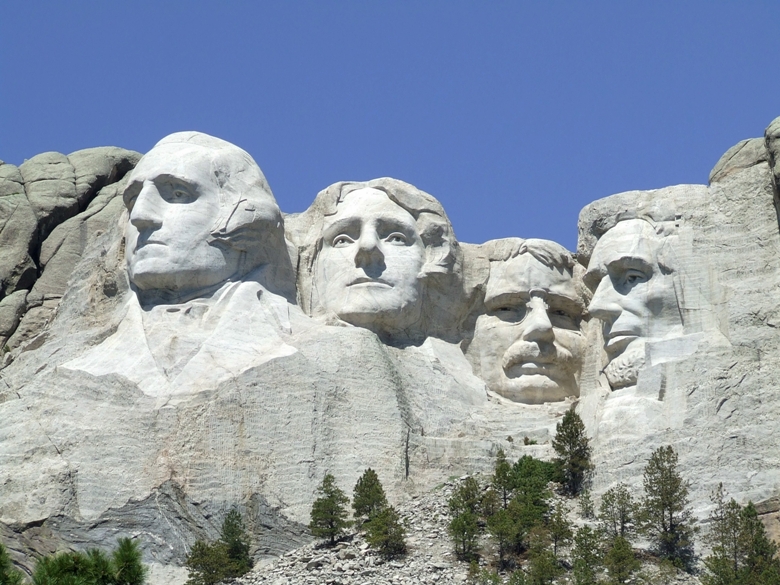 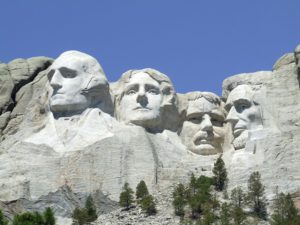 So where can you see the guy with the 20-foot long nose?

Here’s a hint:  Conceived as a tourist gimmick and celebrating its 70th birthday, it’s recognized around the world as a symbol of the United States and democracy.

The answer, of course, is Mount Rushmore, which literally will give the kids an in-your-face history lesson they won’t forget.  The giant heads of George Washington–his nose is 20 feet long, his mouth 18 feet wide–Thomas Jefferson, Abraham Lincoln and Theodore Roosevelt, took 14 years to carve and blast out of the granite on the South Dakota mountain top.

The kids also will learn a lesson here in perseverance and never giving up your dreams. Once he took the job—the idea in 1923 was to attract sightseers to the Black Hills–sculptor Gutzon Borglum changed the location (Mt. Rushmore gets direct sunlight most of the day), the concept (to honor national heroes) and tirelessly lobbied officials for funds. He died of a heart attack at age 57 just three months before the job was finished in 1941. His son Lincoln finished the project. (For more Mount Rushmore information visit www.nps.gov/moru)

Always a winner with kids: A visit to the sculptor’s Studio where the kids can see the tools and models that were used. Rangers often are on hand to answer questions. Don’t forget to remind the kids that they can become Junior Rangers here too.

Have a contest to see how many different state license plates you see in the parking lot. We never saw so many in one place.

There’s no better time than around Independence Day to remember the achievements of Washington, Jefferson, Lincoln and Roosevelt—as well as those of Borglum and the 400-plus workers who labored to make his vision a reality.

The idea was to choose four presidents to represent the first 150 years of U.S history.: George Washington led  the Colonial troops  to victory and served as the new nation’s first president;   Thomas Jefferson penned the Declaration of Independence and doubled the size of the country with the 1803  Louisiana Purchase; Abraham Lincoln, preserved the union and abolished slavery and  Theodore Roosevelt, who loved the outdoors, led America into the 20th Century, helped spearhead the construction of the Panama Canal  and did much to preserve the country’s natural resources .

Mount Rushmore now draws more than 3 million visitors a year. The only drawback, kids say: They can’t climb on the statues.

Still, Mount Rushmore can serve as a welcome respite during an interminable   cross-country trip or the centerpiece for a family vacation in the Black Hills that’s certain to be fun and give you plenty of bang for your vacation buck, though high gas prices likely will make getting there cost more.

Besides Mount Rushmore, there’s the chance to:

–Get up close to a one of the largest public buffalo herds at Custer State Park (1,300 bison!) where you can take a jeep tour to watch the herd, stay in an old-fashioned cabin on a lake or camp out.

–See the colossal statue of Chief Crazy Horse being carved at the Crazy Horse Memorial Museum.

–Join a “dig” at The Mammoth Site where paleontologists have been excavating more than 50 Mammoths who were trapped in a sinkhole more than 26,000 years ago.  Book reservations ahead!

–Buy cowboy hats and souvenirs at the huge Wall Drug in the tiny town of Wall, SD. The store got its start during the Depression by advertising free ice water. Now you can’t miss their hokey highway signs. The kids will insist you stop. There’s home-made ice cream too.

Just be forewarned, even with so many things to do, our kids still remember best counting license plates.

Download the Great Western National Parks chapter from Eileen’s newly updated guides for Taking the Kids throughout the Western United States are now available for the NOOK and Kindle. Your kids will love the fun facts, games and puzzles!