Hit the Beach at LEGOLAND Beach Retreat in Florida 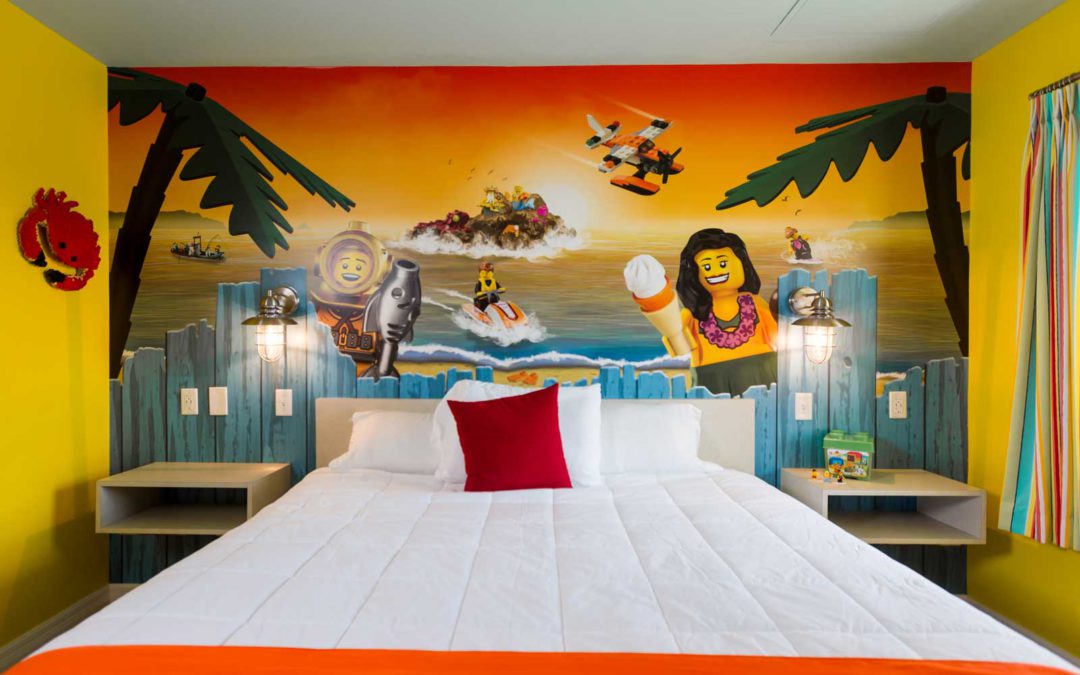 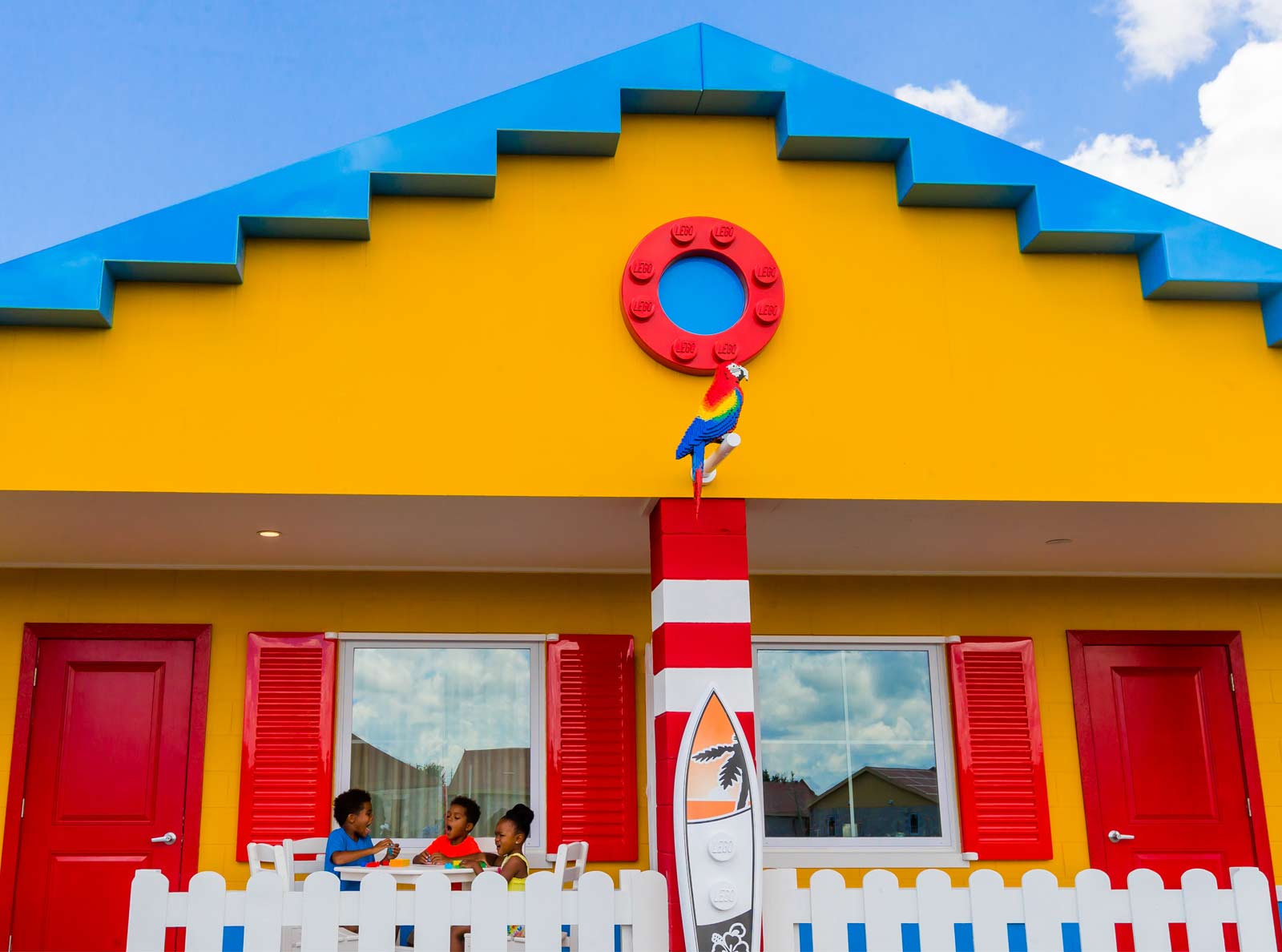 There’s a lighthouse just a stone’s throw from Orlando that’s calling your name. LEGOLAND Florida’s new Beach Retreat is a beacon for weary families looking for a place to unwind and relax after a day on the rides and waterpark. Featuring 83 beach-themed bungalows and 166 separate rooms, the Beach Retreat features a restaurant, pool, and plenty of opportunities for outdoor play.

LEGO-loving kids will go nuts over the inspired toy bungalows painted in bright colors with LEGO parrots poised over the doors. Inside, it looked more like some of LEGO’S “Model Citizens” came to life and started furiously building life-sized beach bungalows complete with LEGO-themed wallpaper, faux surf boards, shower curtains and even a tub of LEGOS to play with. Even the fences around the bungalows look like to-scale LEGO bricks.

My kids immediately ran behind the privacy curtain in our room. It’s like they knew there was a cubby and bunk beds back there beckoning them forward. Families with three kids can pull out a lower trundle to expand the sleeping space. My kids also immediately noticed there was no television in their cubby area like at the LEGOLAND Florida Hotel we had stayed out, so they resigned themselves to walking a foot into our bedroom area to watch it. Fortunately they were too excited to want much screen time, and immediately opted to head outdoors. 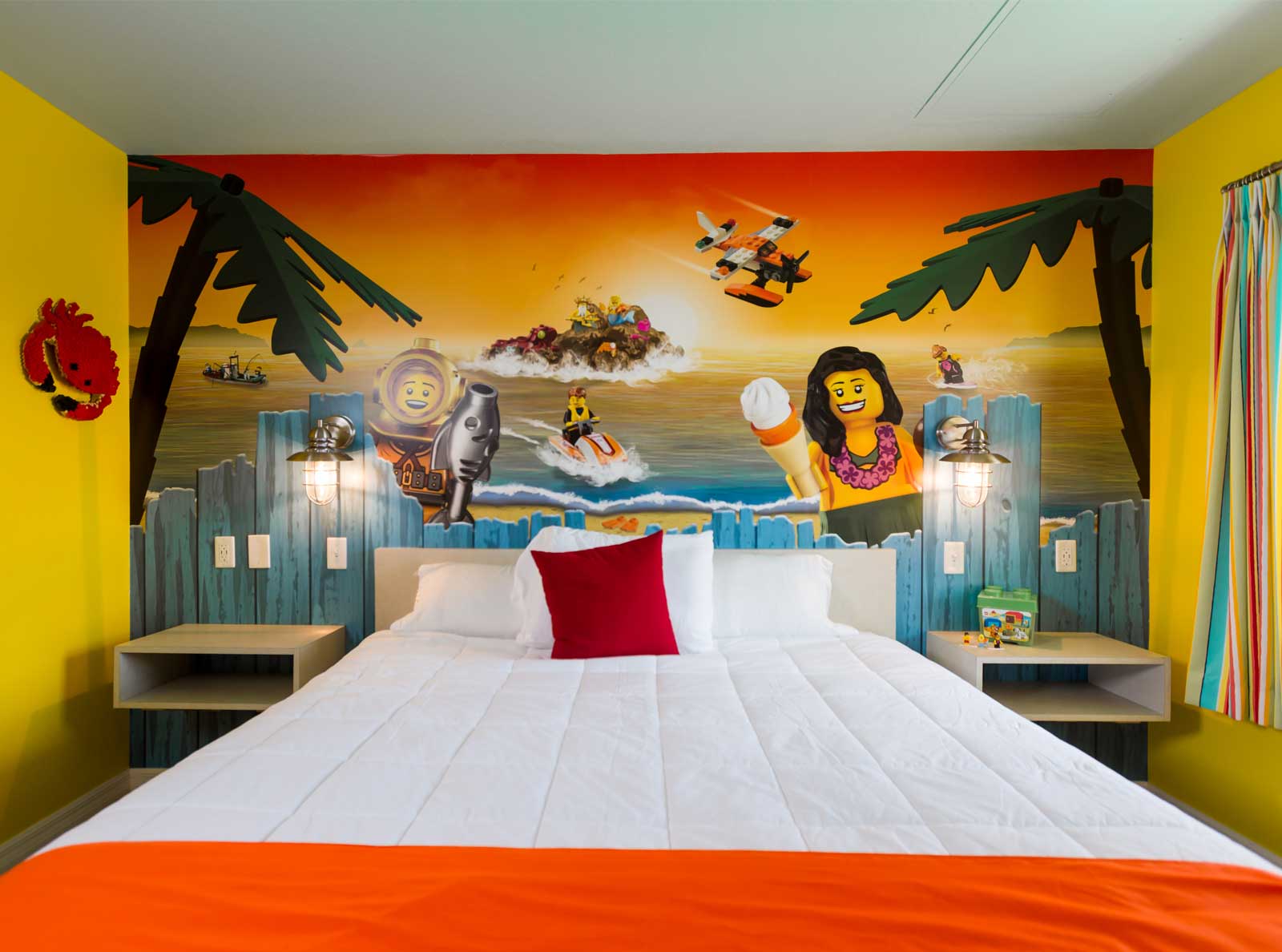 Inside a LEGOland Hotel Bungalow

While the bungalows look like oversized cottages, inside they’re about the same size as a decent sized hotel room, only with cubby area and bunk beds. But what makes the LEGOLAND Beach Retreat so magical is the ability to just open your door and plop down on the chairs and put a cold drink and book down on your own patio table.

LEGO lovers already know these little yellow builders are smart. They team confirmed that the playgrounds in each circular courtyard of the bungalows were built with direct eyesight from your front door in mind. That means parents can watch one child play while the other naps inside, all while putting their feet up on their patio area.

Over at the LEGOLAND Beach Retreat pool, kids are busy building oversized LEGO creations with floating bricks. My daughter spent a good hour hunting down all of the red bricks in the pool to create her “sculpture”. There’s also a white sandy beach alongside the pool, and a playground designed with kids 5-years on up in mind. A restaurant is just a few feet from the pool gate, and families can order from the side window. There’s even extra special Mom and Dad drinks rivaling the best tropical cocktails.

The beach area was small enough to keep tabs on what your kids are doing, even if one is splashing around in the pool, but big enough to have some serious fun. My daughter decided sand angels were in order, and used her 5-year-old powers of concentration to really dig in and get to work. She drew quite a crowd and waved to them as she kept at it.

There are some notable, and welcomed, differences between the LEGOLAND Florida Hotel and Beach Retreat. For starters, the hotel has an action-packed lobby with LEGO “Brick Pits”, a life-sized ship to play on, and nightly activities like LEGO building contests and dance parties. The pool is also larger, and also full of those whimsical floating bricks.

Meanwhile, the Beach Retreat is quieter and resembles a tucked away village resort. The pool is a decent size, but not as large as what you’ll find a the LEGOLAND Florida Hotel. The lighthouse building housing the restaurant and gift shop is roomy and also features a “Brick Pit” but doesn’t have the same level of activities as the hotel.

We stayed at both the LEGOLAND Florida Hotel and Beach Retreat, and preferred the latter. The hotel was a blast, and we stayed in a totally charming kingdom-themed room, but the Beach Retreat felt like magic. I loved being able to sit on my bungalow front porch and look at the stars with the door cracked so I could hear my kids if they woke up. It felt like I was a part of Florida’s cool night air instead of watching it from a hotel window.

Nighttime is the best part about the Beach Retreat for parents, and the lighthouse illuminates the starry sky around 8 p.m. After an evening of swimming and building floating LEGO blocks, my daughter took its illumination to mean it was time to go to bed. I didn’t complain.

We headed back to our bungalow, hand in hand, but she sprinted ahead when she saw Dad lying in the grass in front of our bungalow. The door was cracked open so he could hear our 2-year-old if he woke up. And before I could reach them, our daughter was already sprinting circles around Dad who entertained her with some kind of fervent and fanciful leg kicks. I took that as a sign we were having the best trip ever. And it really was the best of both worlds: Amusement park fun by day, quiet Florida evenings by night.