How a museum exhibit is changing lives in Los Angeles 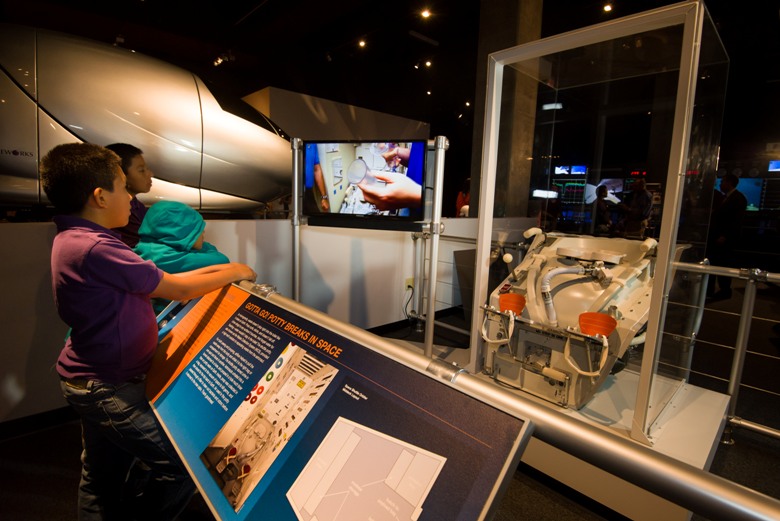 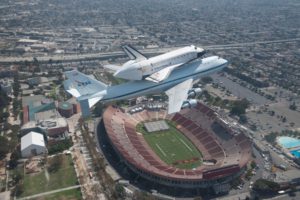 Richard Hercules, 10, lives in L.A.’s inner-city and has never been on an airplane, but that hasn’t stopped him from dreaming of becoming an astronaut when he grows up.

He was moved to tears when he saw the Space Shuttle Endeavour fly over his school on its way to its new home at the California Science Center  and even more excited when he could walk around the gargantuan space craft — 122 feet long — at the museum, touching tires that flew in space, peering up at the tiles crucial to re-entry, inspecting a space potty and galley. (Tortillas, it turns out, are the perfect space food because there were no crumbs to fly around in the gravity-less environment.)

“When I grow up and have my own kids, I can show them the Endeavour and tell them my story about when I first saw it,” he said.

“When I saw the Endeavour up close,” added Taylor, Richard’s classmate at Century Park Elementary School, “I realized that one day I could travel to space.”

New museum exhibits often foster excitement and increase tourism and, since it opened last fall, “The Space Shuttle Endeavour Exhibition” has done both in spades. (Did I mention there is no entrance fee to the wonderful hands-on museum, though you can pay $2 for a timed entrance to Endeavour?) But besides garnering excitement and enthusiasm, this exhibit has the potential to change children’s lives.

“The shuttle coming here opened a world of possibilities for these kids, many of whom are the children of immigrants,” explained Amy Davis, Taylor and Richard’s fifth-grade teacher. Suddenly, they saw the possibilities of a career in math, science, technology and engineering. “It was so hard for them to grasp from a textbook,” said Davis. “Seeing the shuttle in front of them makes all the difference.”

The children’s enthusiasm and engagement spurred Davis to thank the Science Center in a letter. “Thank you from the bottom of my heart for investing time and money so a small, 10-year-old, inner-city child could see that dreams can come true and for giving him hope in his future,” she wrote. That missive, in turn, inspired the museum to feature the Century Park fifth graders’ Endeavour projects in their shuttle exhibit.

An astronaut raised in California came to speak to the children at school. And now, four of Davis’ students, including Richard and Taylor, have been offered scholarships to a week at Space Camp this summer in Huntsville, Ala. (Davis is working on sponsors to cover the kids’ flights.) Keep in mind that these are kids who haven’t been to camp, who typically don’t have the opportunity to go on family vacations. “I’m most excited about living like an astronaut,” Richard said.

The Endeavour, which was the doomed space shuttle Challenger’s replacement and the only shuttle to be named by schoolchildren, arrived with great fanfare at the Science Center on Oct. 31, carried on the back of a specially equipped Boeing 747 from the Kennedy Space Center in Florida and paraded through the heart of urban Los Angeles as 1.5 million people turned out to watch and cheer.

The other three shuttles are on public display on the East Coast — The Enterprise (a prototype that never actually went into space) at the Intrepid Sea, Air and Space Museum Complex in New York, the Discovery at the National Air and Space Museum Steven F. Udvar-Hazy Center near Washington Dulles International Airport in Washington, D.C., and the Atlantis in Florida at the Kennedy Space Center.

“For 30 years (19 years in the case of the Endeavour) humans crossed the threshold from being tentative about space exploration with long periods of time during which there were no humans in space to an era of permanent human presence in space (at the International Space Center),” said Dr. Kenneth Phillips, curator for Aerospace Science at the California Science Center.

“We hope that visitors will appreciate the role of the space shuttle program in transforming the human approach to spaceflight and human thinking about what is possible,” he added.

That’s certainly the case for one group of inner-city kids now thinking differently about their own futures. 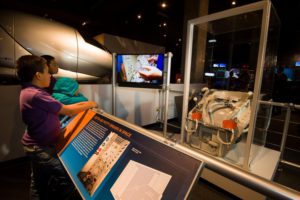 In the last six months, more than 1 million people, including thousands of kids, have turned out to see Endeavour at the Science Center — remarkable when you consider that until now, the Science Center’s annual attendance was 1.6 million, observed William Harris, the museum’s senior vice president of development. Harris escorted me around the Space Shuttle Endeavour Exhibition as excited kids on field trips gawked and chattered as they checked out spacesuits, a moon rock, earlier space capsules and articles astronauts carried with them in space (a small Slinky, beads blessed by the Dali Lama, a New York Giants cap). They also inspected the control room that monitored the first minutes of every shuttle launch from nearby Canoga Park, Calif., learning that all of the orbiters were built locally.

When the permanent home for the shuttle is completed in 2017, visitors will be able to observe it upright — and even slide down a 50-foot slide that will simulate how it would feel to land.

“Its size is the coolest thing ever,” said 14-year-old Samantha, a member of the Science Center’s Curator Kids Club, a group created for kids who live in the under served communities around the museum. “You can compare how small you are next to it!”

The shuttle, said Harris, is single-handedly turning the California Science Center in L.A.’s Exposition Park  into a must-see attraction for those visiting Los Angeles  and spurring more people to visit Exposition Park and the neighboring L.A. County Natural History Museum with its amazing dinosaur exhibits.

“Be prepared to be amazed,” said 11-year-old Oracio, also a young curator.

(Read more about Eileen’s trip to Southern California in her travel diaries. She was researching her latest book, the “Kid’s Guide to Los Angeles,” which will be out in the fall. “Kid’s Guides” are now available to NYC, Orlando and Washington, D.C., from Globe Pequot Press.)