How far has ship safety come since the Titantic? 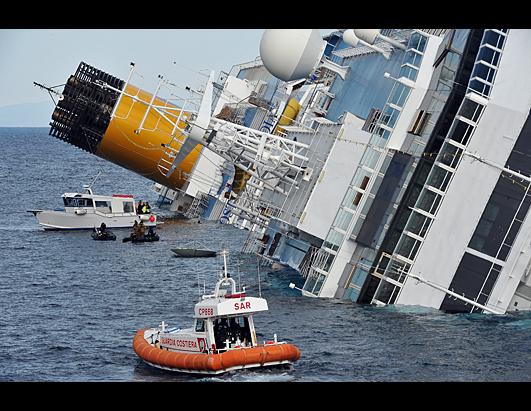 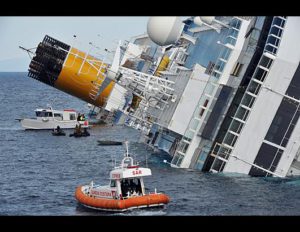 How could this happen? How could a huge luxury liner — the biggest ship built so far in Italy — with every sophisticated navigational tool at its disposal, venture too close to shore, hit rocks and partially sink?

We’ve been bombarded with the images of the huge crippled Costa Concordia ship on its side off the Coast of Tuscany. Just built in 2006, it was the most luxurious in the Costa fleet, carrying more than 4,000 passengers.

The death toll stands at six people with 60 injured and more than 48 hours after the huge vessel capsized, 14 people were still missing, including nine passengers, one of them a young child according to Italian media, and five crew members, according to Reuters.

Just as frightening — or perhaps more so — are the stories from the survivors — the chaos, the apparent lack of preparedness for an emergency by the crew.  “Have you seen `Titanic’?  That’s exactly what it was,” said Valeria Ananias, a 31-year-old Los Angeles schoolteacher aboard the ship who crawled along nearly vertical hallways and stairwells in a desperate attempt to reach rescue boats, the Huffington Post reported.

Fights broke out to get into life boats; crew ignored their passengers, men refused to allow women and children to go first, according to passenger accounts.  “I want everyone to know how badly some people behaved…there was a total lack of organization…there was no one telling people where to go,” one grandmother from Britain traveling with her daughter and two young granddaughters was quoted as saying.

Have we learned nothing in the 100 years since the sinking of the Titanic?

Today’s safety standards aboard large cruise ships of course evolved after the sinking of the Titanic on April 15, 1912, resulting in the deaths of 1,517 people, one of the deadliest peacetime maritime disasters. The high death toll was in part the result of the fact that the ship — though in accordance with regulations of the time — carried lifeboats for only 1,178 of the 2,223 people on board, Wikipedia says. The ship was thought to be unsinkable.

You wouldn’t think a huge 21st Century cruise ship could sink either. Now the captain of the Costa Concordia has been arrested — on charges ranging from manslaughter to abandoning ship. Apparently even when the Coast Guard ordered him to return, he refused. Costa officials have now reversed earlier statements praising their captain, saying there may have been significant human error” by Captain Francesco Schettino that caused the ship to run aground and that “the captain appears not to have followed standard Costa procedures.”

No one should take the mandatory lifeboat drills aboard a cruise ship lightly, though many of us tend to treat the exercise as an annoyance. (Some passengers on the Concordia reported they hadn’t yet even had the emergency drill.)

We should have a “what if” conversation with our kids.  Make a place to meet in case of an emergency (on a big ship, kids and teens more often than not are apart from their parents). If there isn’t time, make sure they know to return to their cabins for their life jackets, needed medication and the location of their muster stations.

But we can only do our part. We expect the ship’s officers and crew to follow the safety protocols set up for an emergency. That they apparently didn’t in this case is to me the most egregious and frightening aspect of this disaster.

In the coming months, we’ll be commemorating the 100th anniversary of the sinking of the Titanic. Pundits and experts will be talking about how far we’ve come in cruise safety since then.

Clearly the Concordia shows we still have a long way to go.