How to cope with another relaxing day on the beach 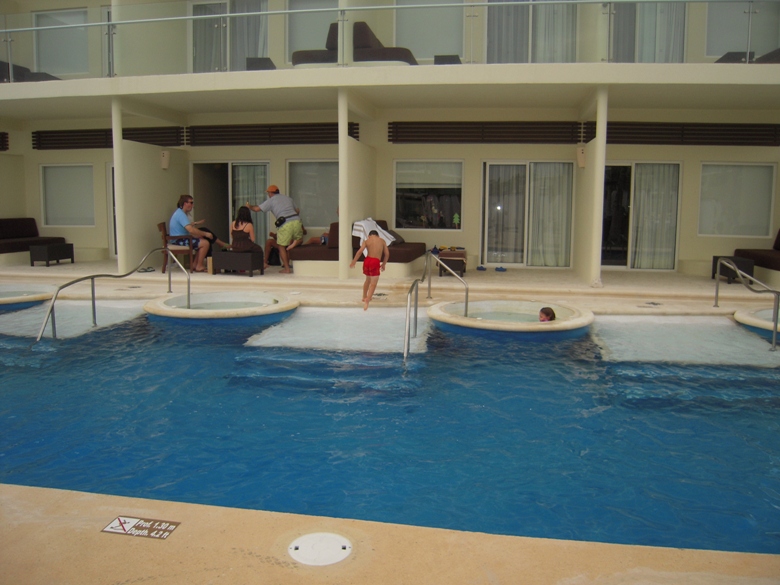 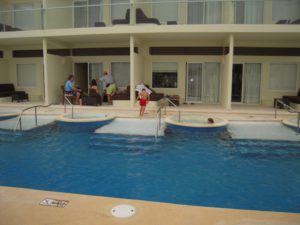 DAY 6 — It’s 7:15 am and I snag the last “beach bed” at the pool area closest to our room at the Azul Sensatori Hotel (www.karismahotels.com) south of Cancun. You can see why they are in demand — comfy oversized mattresses that are covered. “I will take care of everything,” says the beach butler Tomasseo who sets up the bed with towels and brings over beach lounge chairs as well. I can get used to the beach butlers. Every hour they come by — would we like a fruit cabob, a glass of juice, a bottle of water, a cold towel, a sandwich presented in a cooler…

Behind us, kids are splashing in their swim-up rooms — where pools and Jacuzzis come right to their room. “It’s brilliant,” said Marci Mullen, as she watched her 6-year-old son and 5-year-old daughter move from the pool to the Jacuzzi to the pool and back again. If they wanted, they could swim from their room several hundred yards to the swim up bar. The beach butler, Mullen says, bring snacks and drinks to the kids right there at their room. “They love kids here,” she said.

Mullen and her husband Rob, who are from Alberta, concede that because of the economic crash, the trip cost them almost $2000 more than they planned because of the fall of the Canadian dollar. But they came anyway. “This is such a different Christmas,” she said. “That’s the best part. You hardly know it’s Christmas. It’s not about selling things. Here, it’s about being together.”

A few beach beds away, Suzy Clode is relaxing with her husband Alex before her kids wake up. They’ve just arrived from London and truth to tell, she says, if they hadn’t paid for the trip last spring, they might not have come because of the economy “But I’m glad we did,” Clode says. With one child going to college next year and the economy, this might be the last big family holiday for a while.

She concedes the new resort is having “teething pains,” a fold out bed that is broken, that it takes a long time to get anything fixed. But still, it’s a beautiful spot, the sun is shining and then there are the beach butlers.

Marci Mullen notes that her kids especially like the restaurant where they can make their own pizza and choose what they want in their pasta. I like that though this is an all inclusive resort there are no big buffets, but six different restaurants to choose from — Mexican one night, Caribbean another, Italian with an Italian Chef and one designed strictly for adults, among others. There’s also 24 hour room service at no extra charge.

“I love it,” said Allie Falender, who is from Houston and is here with a large family group from around the country, courtesy of her 92 year-old grandmother. She’s got a 10 month old in tow and was thrilled that everything she needed — crib, baby bath tub, bottle sterilizer — was waiting in her room.

We’re standing at the “taco stand” mid afternoon waiting for freshly made tacos. Meat or chicken? “It’s nice not to have to organize anything, that it’s all here,” said Falender. The rooms are conducive for a family reunion — everyone can gather right outside on the patios without trooping through the rooms.
Despite the glitches in service, everyone seems to be relaxing and having a good time. “You’ve got to have patience,” says Rob Mullen. It is Mexico after all. And the resort has only been open for six weeks.

Some kids are tossing a football on the beach, others a soccer ball. Kids are playing in the pool until their lips turn blue. My daughter and I sit sipping fruity drinks at the swim up bar (there are several to choose from!).

And in the end, that’s what counts.