The sights, sounds and scents of Tokyo, Japan 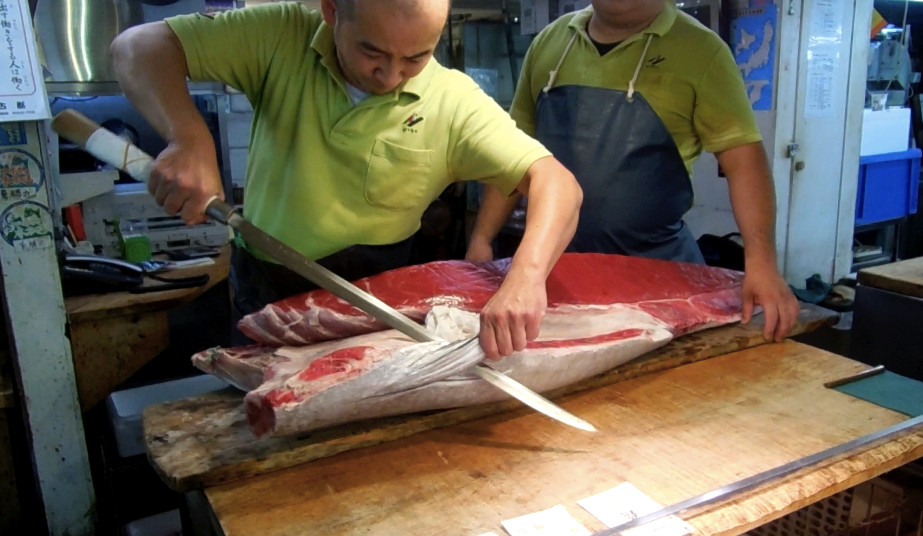 The men look at the huge slab of fresh tuna as if they are about to perform surgery, and they are.

The knife, more than three feet long, comes down precisely and in one slice, the tuna is cut.

It is eight in the morning and we are a few blocks from the hotel at Tokyo’s famous Tsukiji Fish Market, Japan’ largest. More than 15,000 people work here; international tourists line up in the early hours of the morning for the chance to watch the famous fish auctions, including the tuna that can weigh in at 400 pounds. Many will go away disappointed. This is the largest wholesale fish market in the world and one of the largest wholesale food markets of any kind.

The Japanese, explains the Conrad’s Marketing Manager Kanna Iizuka, are somewhat bemused by the fact that this market is such a huge international tourist attraction. “For us, this is a workplace,” she explained. By the end of 2016, in advance of the 2020 Olympics, the inner market is scheduled to move to Tokyo’s Toyosu district, a little over two miles south of here and 10 minutes by train. Locals say the new site will be twice as large and will be more tourist friendly with tourists able to look down on the huge inner market, but, of course, some of the charm may be lost, especially in the surrounding area famous for its kitchenware stalls and small restaurants. Hiroshi Umezawa, president of Maruken Co, LTD., led us through the labyrinth of stalls, and says feelings are mixed about the move — the market has been here for more than 50 years and many families have been part of this market for generations.

Lonely Planet ranks Japan — which has welcomed nearly a million American tourists so far this year — as its second top pick for tourists in 2016 because it is such a mix of the ancient and modern. That’s certainly true in Tokyo, with more than 13 million people it’s one of the largest cities in the world. At a time when families may be rethinking plans to travel overseas, Tokyo with that rare and perfect mix of ancient culture and up-to-the-minute electronics, shopping and entertainment, proves why we want to leave home — to experience another culture, to have fun, to share an experience with our kids we can’t have elsewhere. American kids I met, by the way, told me that seeing how respectful Japanese are to one another made them think more about their behavior at home. Japanese go out of their way to help tourists like us, too, though few speak English.

Of course, the city dresses itself up to the hilt for the holidays. What better way to celebrate than to see Mt. Fuji? But if you are considering a winter trip — or one next December — you may be able to grab a bargain. According to the hotel megasearch site trivago December (before the holidays) and January (remember Japan has more than 500 ski resorts) are typically the cheapest months hotel-wise.

Tokyo tourism officials lament that though they are the world’s second-largest city with 17 million residents (if you count Yokohama), tourists typically spend just a few days here. Certainly Tokyo can be overwhelming. Certainly it is worth more time.

There’s a lot for families to do, whatever the ages of the kids — from Shinjuku Central Park with a splash pool and weekend flea markets, the Cup Noodles Museum in Yokohama, the Edo-Tokyo Museum, which offers a visual look at Japan’s history. There’s even the Oedo Onsen Monogatari(Odaiba) Tokyo’s hot spring theme park with natural hot springs, games, live shows and, of course, Japanese food.

There’s the Ghibli Museum with the characters of the famous animation studio Studio Ghibli and the big Pokemon Center store. Got a Hello Kitty fan in the crowd? They won’t want to miss the indoor Hello Kitty theme park: Sanrio Puroland. Visit the Imperial Palace grounds famous for its moats and massive stone walls in the center of Tokyo, the residence of Japan’s emperor. (If you come Dec. 23, the emperor’s birthday, or Jan. 2, you might be able to join the crowds at the inner-palace grounds when the imperial family makes public appearances.

Let’s not forget First Avenue Tokyo Station with shops, cartoon character things, sweets and the entire Ramen Street where you can sample Ramen from all over Japan. Stop in at the Coredo shopping center in Central Tokyo where you can have sweet potato fries (a new craze), sample soup stock, buy chopsticks, watch a chef prepare an intricate pastry for you at Kayanoya Dashi. Visit a tea shop and choose your favorite brew to take home. You can also sign on for a culture experience tour and lunch.

Fans of the newest technologies, of course, know the famous Akihabara area for electronics, but there is a neighborhood for everyone — Shibuya and Harajuku for teens who won’t want to miss a stroll down Takeshita Street with all of its vintage stores, crepe shops and 100-yen stores, which are great for souvenirs. (100 yen are worth roughly $1)

Foodies of all ages will love Tokyo’s Kitchen Town, the Kappabashi DouguGai neighborhood, where professional chefs and visiting cooks alike come to shop. Kids especially will love the shops devoted to all varieties and sizes of plastic food ubiquitous outside restaurants here, the giant chef on the top of a building welcoming you and the stories of the Kappa, the water boy (kind of half merman), who is said, with his friends, to save the neighborhood from floods. Pose for a selfie at his statue!

There’s shop after shop of kitchen wares — ceramic sake cups, wooden bowls for miso soup, colorful bowls for rice, every color of chopsticks and, of course, handmade Japanese knives that will be engraved on the spot with your name in Japanese. And everything is a bargain!

More important, take the time. Exploring without an agenda is the most fun, said Japan expert and frequent visitor Marian Goldberg, who helped me plan our trip.

On our last morning in Tokyo, which also happened to be my birthday, we went to the famous Meiji Jingu Shrine dedicated to the souls of Emperor Meiji and Empress Shoken. Emperor Meiji took the initiative to introduce Western civilization in the 19th century, while preserving Japanese culture, and is credited with laying the foundations of modern Japan.

They were so loved that after they died and were buried in Kyoto, people all over Japan and overseas donated 100,000 trees to create this forest. There is also the huge Torii shrine archway.

At the Temizuya water font, we rinse our hands, left hand first, and our mouth before going to the main shrine building. There are people here who have come from all over Japan to pray and this, of course, is a very popular tourist site, as well as wedding spot.

After two weeks in Japan and visits to many temples and shrines, we now know the drill — a few yen donation in the box, bowing twice, clapping our hands twice and bowing once again. (For more on my trip to Japan, read my trip diaries.)

I say a silent prayer for all those who welcomed us so warmly — and for the chance to return soon.

EXTRA: How many courses for dinner?

My husband is dismayed when he learns it will be as many as 14 — all small, artfully prepared and exquisitely presented, if you opt for the traditional Japanese Kaiseki cuisine that dates back 500 years. Geishas entertained at such dinners.

If you think that might be a little too much to handle—or too long to sit at the dinner table, come sample Chef Kenichiro Ooe’s fare at Kozue on the 40th floor of the Park Hyatt Tokyo, which offers stellar views of the city. The hotel was designed by Dr. Kenzo Tange, the father of modern Japanese architecture, who established his career by providing the plans for the reconstruction of Hiroshima. Nearly every public space and room offers spectacular views and interesting art.

Bill Murray and Scarlett Johansson fans may recall the hotel as the setting for many scenes in the film “Lost in Translation.”

Seventy percent of the guests at the 177-room deluxe hotel are westerners, while only 30 percent of the restaurant guests are. Many Japanese are fans of the hotel’s New York Grill with its open kitchen, 1,800-bottle wine cellar and sampling of Japan’s famous beef, said Chef Federico Heinzmann, who is from Argentina. “Japanese food is very complex,” he said. “The idea of the New York Grill is more relaxed, but the place to see why there is so much fuss about Japanese beef and tuna,”

— The emphasis on freshness and quality. Tokyo, he said, is a mecca for foodies — starting for kids just exploring new cuisine. Kids are welcome at both the New York Grill and Kozue, where Chef Ooe serves eight courses rather than the traditional 14, plus a small dessert. Ooe explained that rice or noodles are served at the end of the meal, and added that with advance notice, he’ll arrange even fewer courses to make the meal more kid-friendly. We sampled:

“Savor each course,” he urged.